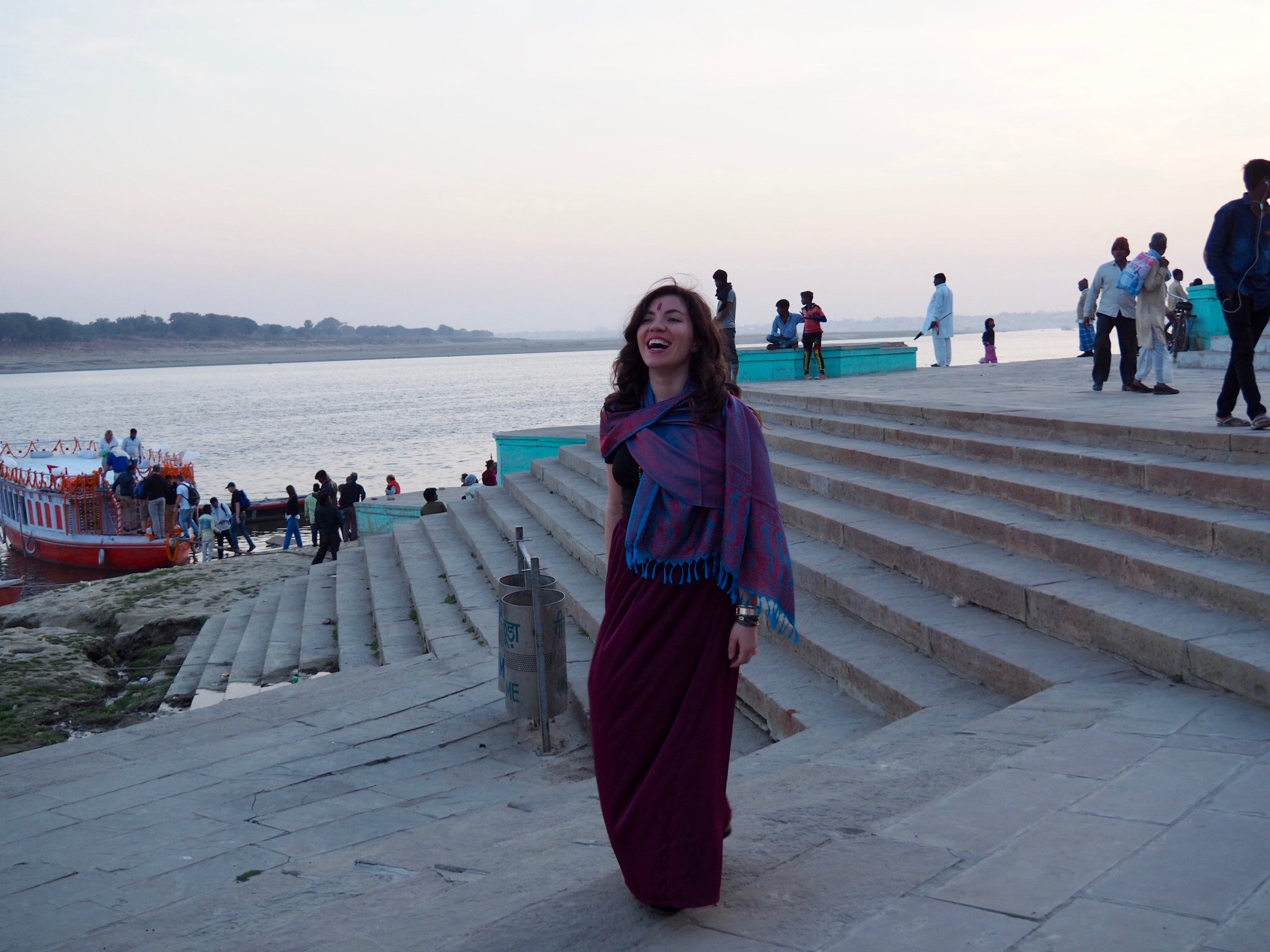 Its sunset in Varanasi and the pink and blue streaked sky is beginning to cast a glow over the slow-flowing Ganges River. It’s surreal to be here as it feels like it was just yesterday that I was wearing pajamas back in New York City, watching a CNN special on Varanasi, with my tabby cat curled up alongside me.

Varanasi. This India city is the oldest and holiest in the country—perhaps the world—as it is considered the ‘cosmic center of the universe’ in the Hindu religion. It is said four million some people come to Varanasi each year for a pilgrimage to bathe in the sacred waters of the ‘Mother Ganges’ (as it is affectionately called here) and to perform funeral rites. It is believed in Hinduism that to be cremated and have one’s ashes spread in the Ganges River is to send the soul directly to heaven and break the cycle of reincarnation. Open air crematoriums burn brightly along the river banks, 24 hours a day, with an estimated 300 bodies being offered up to the river daily.

To truly embrace the essence of Varanasi—a city that Lonely Planet has aptly referred to as “the India of your imagination”—I board a riverboat at sunset. My boat slowly begins moving downstream as I approach billowing clouds of smoke up ahead. On the banks of the Ganges sits four or five infernos, brightly blazing and contained, a shrouded body at the center of each flame. The open-air crematoriums are memorizing in the way the only morbidity can be. 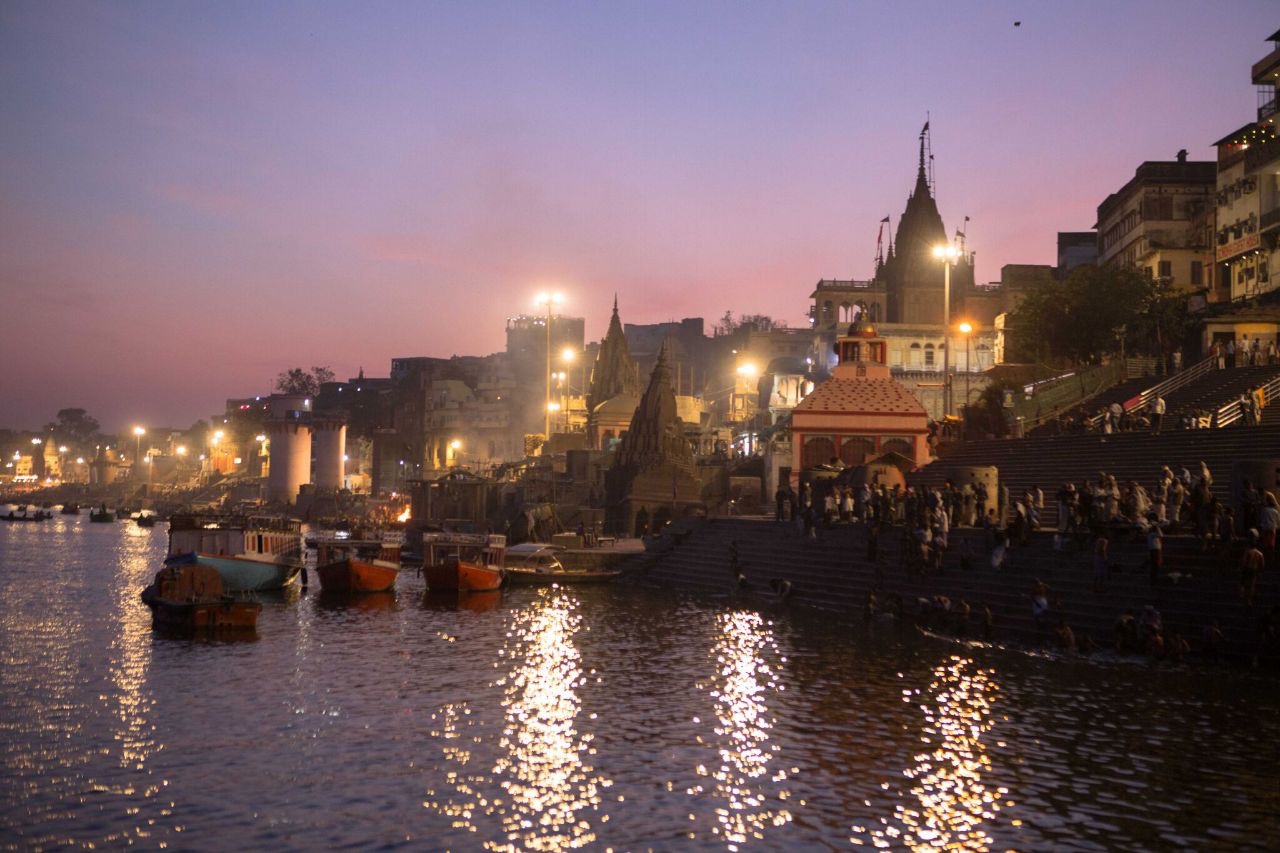 It’s difficult for me to articulate what it feels like to watch these open-air crematoriums. To see silhouettes of the mourning watch solemnly as they bid farewell to whoever lays in the midst of the fire. To come from a culture where death is spoken about in hushed voices, there is something humbling, jarring yet beautiful about these Varanasi funeral rituals.

I think about my grandma, Amparo, who passed away yet still feels very much alive to me. In fact, I bring a silver bracelet of hers with me to Varanasi and momentarily consider dropping it into the Ganges River as an offering. I’m watching the dance between life and death unfold on the river banks and feeling her bracelet in my hand, imagining how iconic it would be to offer it up to the river in this holiest of holy places. Then I realize—almost comically so—how much my grandma would have hated this idea. For her, of which cleanliness was close to Godliness, she would have wrinkled her nose at the murky waters of this river and balked at the thought of my throwing her jewelry in there.

Riding the boat down the Ganges in Varanasi is like seeing death wearing that woolen black cloak and standing along the river’s edge, ushering souls out of the fire and into the water. It isn’t scary to see death standing there—waving to our passing boat as if to say hello—rather it is…moving. There is something so profoundly moving about watching these bodies be offered back to nature in a loving and spiritual manner that is out in the open. There is no running from time nor hiding from death here in Varanasi; rather, there is a calm and cool acceptance of life’s realities. We are born, we live, we age, we die and all of it is approached with nothing but unwavering love and gratitude.

My boat moves slowly past the flames and billowing clouds of smoke, past piles of smoldering ash waiting to be offered up to the Mother Ganges. While bodies on stretchers—shrouded and covered in marigold flowers—lay waiting on the steps for their turn at the cremation.

Just down river from the cremations and solemnity of death is a veritable fiesta of lights and music. This is the nightly Aarti festival, a dedication to the Mother Ganges in which people gather to say goodnight and thank you to the holy river. Chimes and Sanskrit chanting fill the air as people gather—both in boats and on land—by the hundreds to witness this brilliant display of life and devotion. As the Aarti festival begins, those in boats send flower and candle offerings gently sailing down the river—holding their prayers and wishes—so that the blackened water is lit up with dozens of twinkling floating lights. 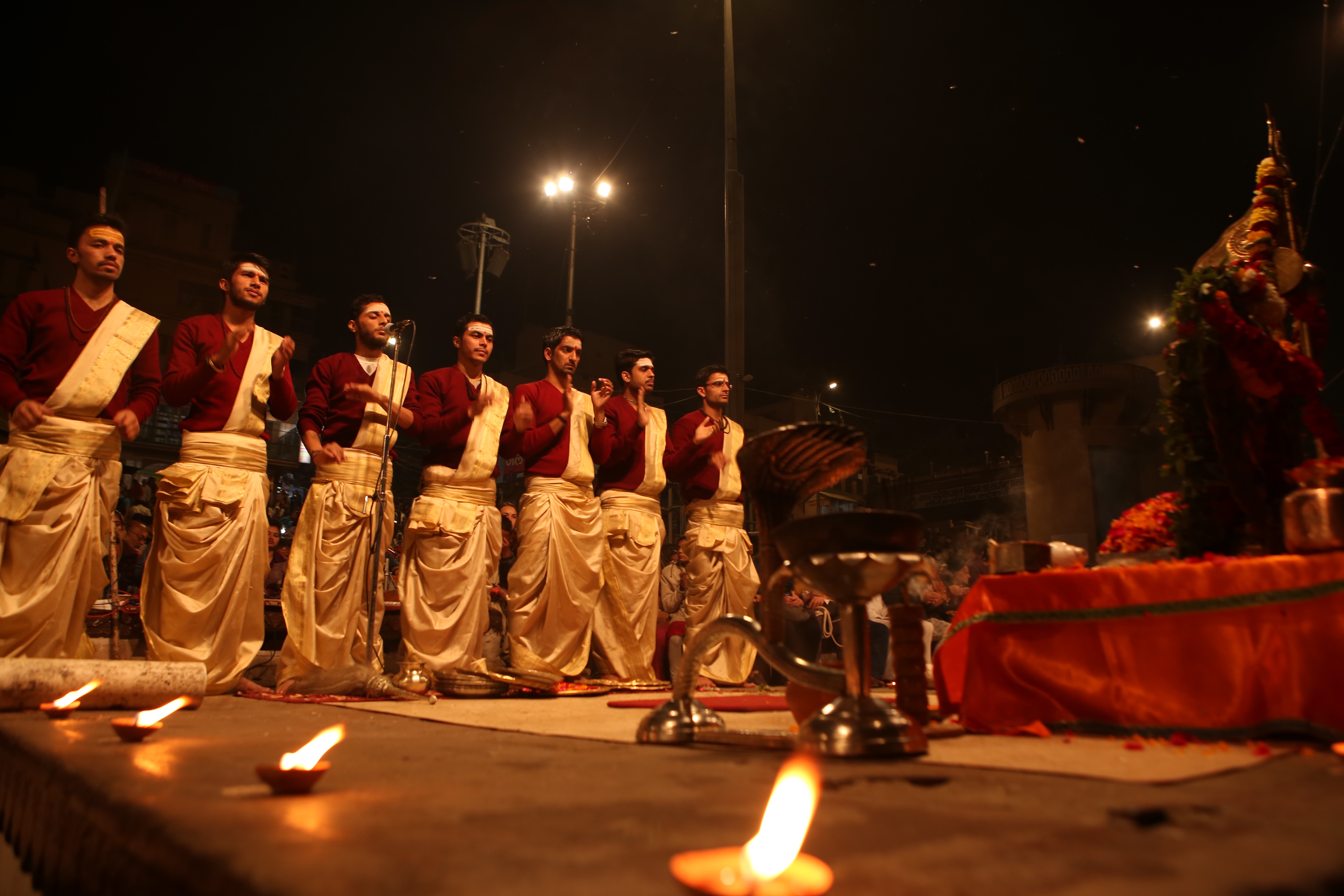 I remember being a kid at Disney and taking that terribly annoying “It’s a small world, after all” boat ride. The ride—which was created for the 1964 World’s Fair—had guests slowly take a boat past mechanical children from all over the world singing the repetitive “it’s a small world” song. The point of the ride was to show, in one quick boat trip, how varied and diverse humanity can be. Children from Russia to Botswana were all united in song, proving that this big planet of ours didn’t need to separate us emotionally. This is what a boat ride in Varanasi is like—minus the God awful song—the boat moves past a never-ending display of human emotion like that Disney ride sailed past multicultural children. From the bow of the boat, the juxtaposition of devotion and frivolity, passion and mourning and solemnity and happiness all dance side-by-side.

It is this duality of Varanasi—the way that life and death seemingly live like neighbors on this holy river—that just unstitches me. It’s as if Life throws his nightly party, inviting people from near and far, to dance, chant, sing and feel alive; meanwhile Death, that omnipresent solemn neighbor, respectfully watches from upriver. For a city known for its unique approach to death, one can’t help but feel utterly alive in Varanasi.

What to Do – (1) A Riverboat ride down the Ganges to witness the cremations and nightly Aarti festival. (2) A visit to the Vishwanath Temple. (3) A tour of the Ghats (places where steps lead into the river’s water), specifically: Assi Ghat, Chet Singh Ghat and Darbhanga Ghat (a photo hotspot).

*Disclaimer: I was invited to India as a guest of the India Tourism Board and a passenger on the Maharaja Express. All opinions expressed here are my own.