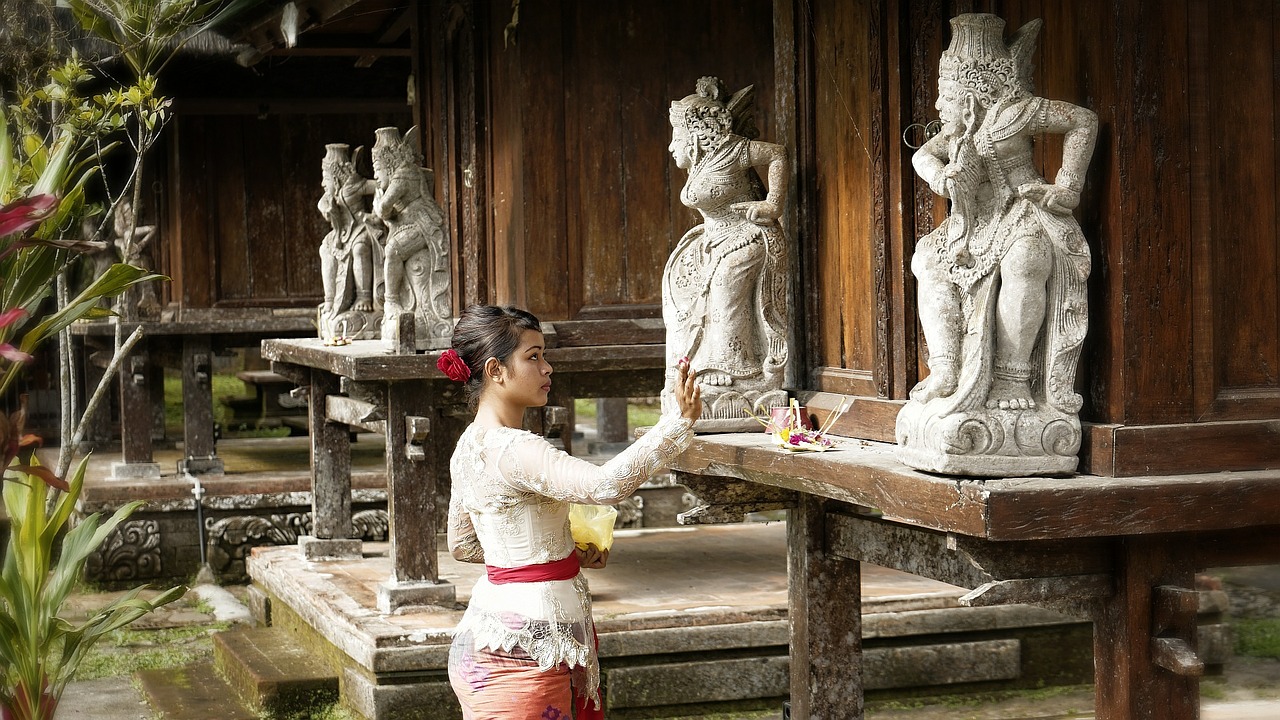 Every morning in Ubud, I woke up to the soft swishing of the family compound being swept with a coarse broom made of coconut branches. I laid in bed for a few more minutes, listening to the other morning sounds take shape: the cooing of the birds, the chirps of the geckos and the loud protests of the roosters that lived down the street. Tourists seeking a transcendent Eat, Pray, Love experience often find that the congested streets, intimidating motorbike traffic and barking dogs aren’t what they expected. Still, the spirituality in Ubud, the cultural capital of Bali, is pulsing, magnetic. Beyond yoga and healing crystals, there’s magic here, wielded by both holy and wicked forces.

The serenity of mornings let you soak in the spirituality of the culture. I’d wander carefully on the caved-in sidewalks of Ubud to enjoy the locals’ daily offerings to the Gods and demons of Balinese Hinduism before they were wilted or trampled. Balinese lives are packed with ceremony and ritual, and daily offerings are sprinkled seemingly everywhere throughout Ubud: the stairs of my guesthouse and the seat of my rented motorbike, throughout family temples or on freshly scrubbed sidewalks. The offerings come in various forms, from small woven palm tree baskets streaming with incense to frangipani blossoms tucked behind the ears of sharp-toothed deities and jovial Buddhas guarding family temples. 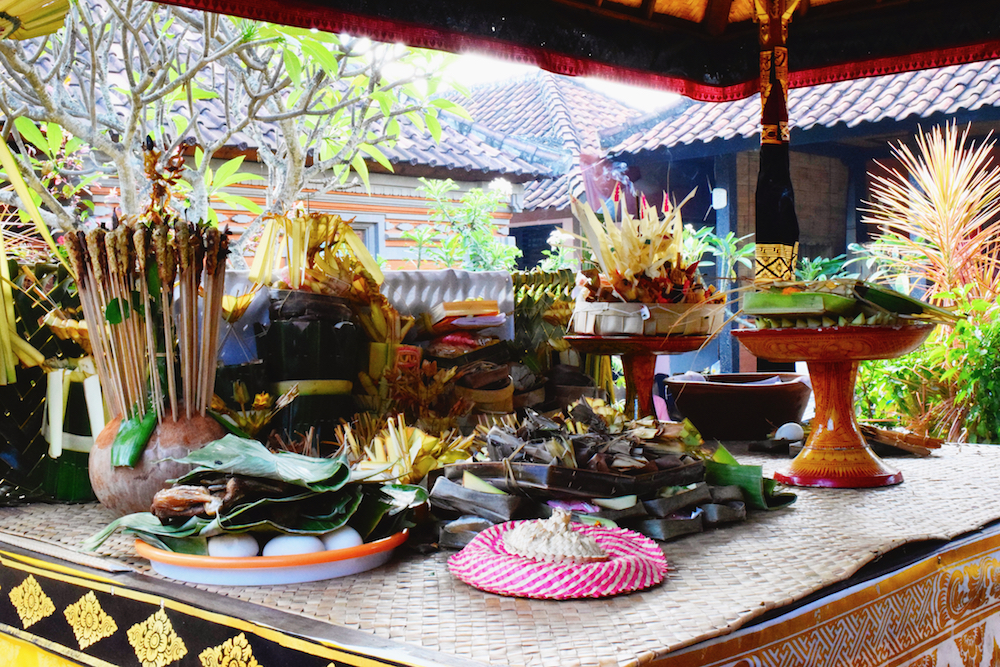 These daily offerings, as well as copious ceremonies during the year, maintain the cosmic balance between good and evil in Hinduism. “The essential driving force of Balinese is that the world is made up of good and bad forces,” explained Associate Professor Helen Creese of the University of Queensland in Australia. “Harmony and life are sustained by keeping these [two forces] in balance. Offerings are made to the Gods — the forces of good — and there are always offerings placed on the ground to placate the spirits that dwell in the ground — the bad forces, or the butakala. The good and the bad forces are inseparable.”

You won’t just feel the mystical pull of Bali during the peaceful mornings. The dark, tropical nights are charged with the supernatural potential of the island — the possibility that dark magic exists and witches walk the streets. “You may be sure what you believe when you’re at home, but it changes when you’re in Bali,” adds Creese.

One of my hosts, an American that had lived in Ubud for 10 years, claims to have experienced the supernatural power of Bali firsthand. After a walk in his neighborhood one night, he started suffering from a foot ailment so painful that he could barely move. After rounds of Western medicine, his Balinese wife convinced him to visit a healer who finally cured him. He believes that a witch, or Leyak, had planted a cursed twig — intended for someone else — on his street and he was the accidental victim.

Leyak and dark magic differ from the butakala, Leyak are essentially human and study the same ancient texts as healers. “Leyak often target family members and their effects often have real-world causes,” explains Creese. “For example, if someone trips over something and hurts themselves and there’s dissent in the community, it can actually be attributed to a witch. These Leyak can shape change, taking the form of monkeys, birds, and apparitions in the air, or look like lights in the distance. You can’t actually kill one of these with a knife. You need to use good magic to placate them.” Or, in the case of families welcoming a newborn baby, protect against the Leyak. 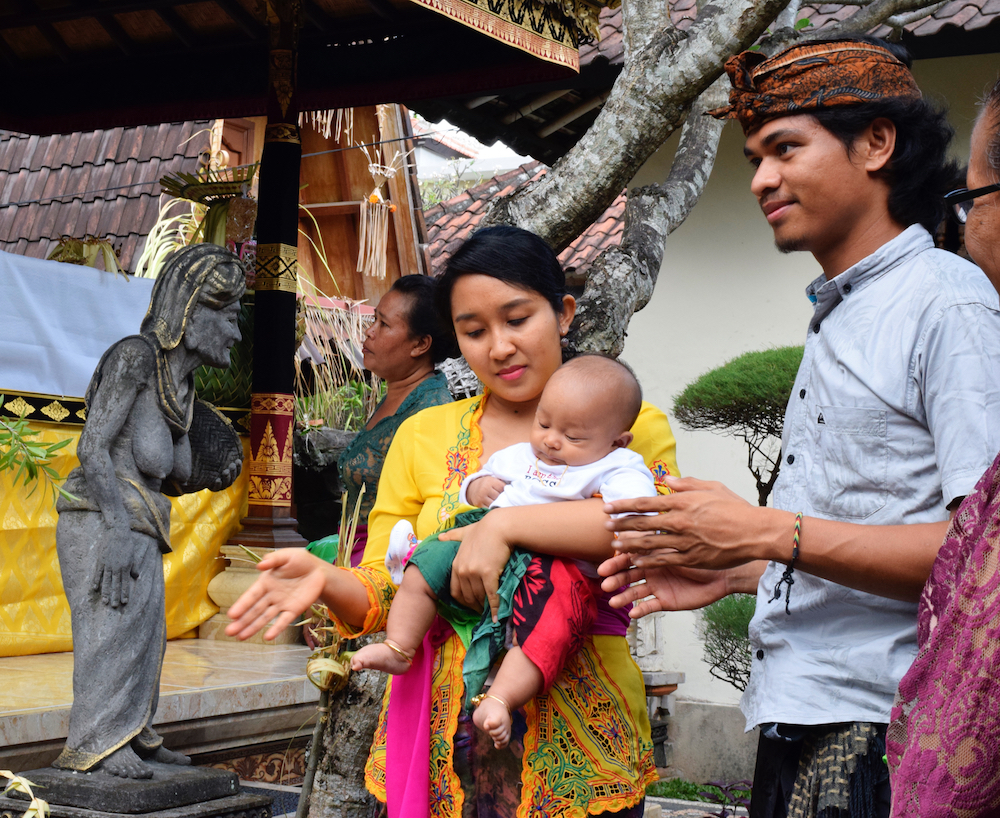 In Balinese culture, babies are especially susceptible to witches, which I came to discover during my last week when my hosts, Putu and Wayan, invited me to the Telu Bulan ceremony of their grandson. Telu Bulan translates to three months — through the timing can vary by village — and it’s one of the most important ceremonies in Balinese life, where a baby receives a name, is introduced to the community and touches the ground for the first time.

“In Bali, a baby is still a divine being for the first 105 days of life. The Telu Bulan ceremony marks the baby’s transition from a divine being to a human form,” Creese explains. They’re not only kept off the ground, which is associated with mortals, because of their divine state, but also for their own protection. “People are particularly vulnerable to Leyak if they’re sick, injured or weakened,” suggests Creese. “Babies up to three months are considered to be especially vulnerable to this power of evil. The Telu Bulan ceremony is to protect the child.” 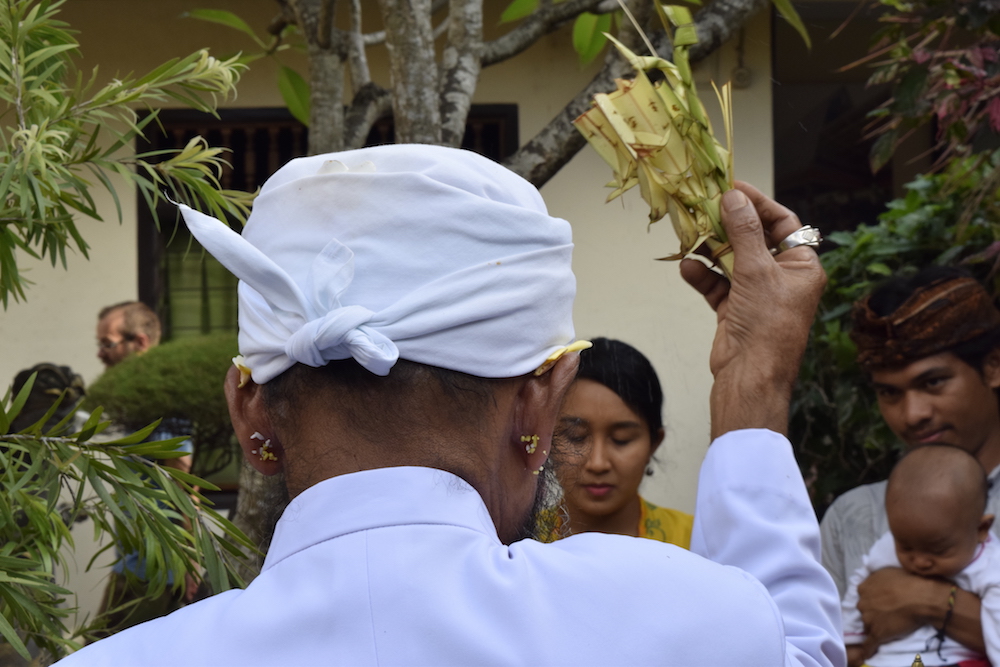 On the night before the ceremony, I watched as about 20 of Putu’s extended family members streamed into the compound. It was that night I felt the magic of Bali. I woke suddenly around 2 a.m. and heard the rest of the family, Putu’s ancestors, traveling on the wind. Perhaps it was a vivid dream or music from their festivities drifting through my window, but I knew in my gut that it was the voices of their ancestors joining the rest of the family for the next day’s celebration.

The heat of afternoon the next day, Putu tied a traditional sarong around my waist and I joined the women of the family in the ornate family temple, made up of several stilted altars. Dressed in fitted lace blouses and bright sarongs, the women completed several rounds of offerings and prayers, taking breaks to chat, sing, sip tea and nibble on snacks.

I followed the women out of the temple to the main family compound as the ceremony began. The priest, clad in a holy white suit and turban, waved cleansing incense over the baby, held by his seated father. The rites continued as they stood, the priest sprinkling holy water on the baby’s face, the mother and father washing his tiny feet in the holy water, and Putu helping her son and daughter-in-law adorn the baby with gold jewelry, including a delicate amulet. “The baby’s umbilical cord is put inside an amulet, and they’ll wear it around their neck to keep witches away,” clarifies Creese, adding that sometimes an old Chinese coin and tiger’s tooth are given to the baby during the ceremony to protect against dark magic.

As the time came for the father to lower the baby to the ground for the first time, the family crowded around to see his small feet touch the warm concrete. I backed away to give them space, and within 30 seconds the moment had passed. As the priest wrapped up the ceremony, I could see the joy on each family member’s face at having their divine newborn transition into a little human, ready to join the ranks of the Balinese community in upholding the balance of good and evil.