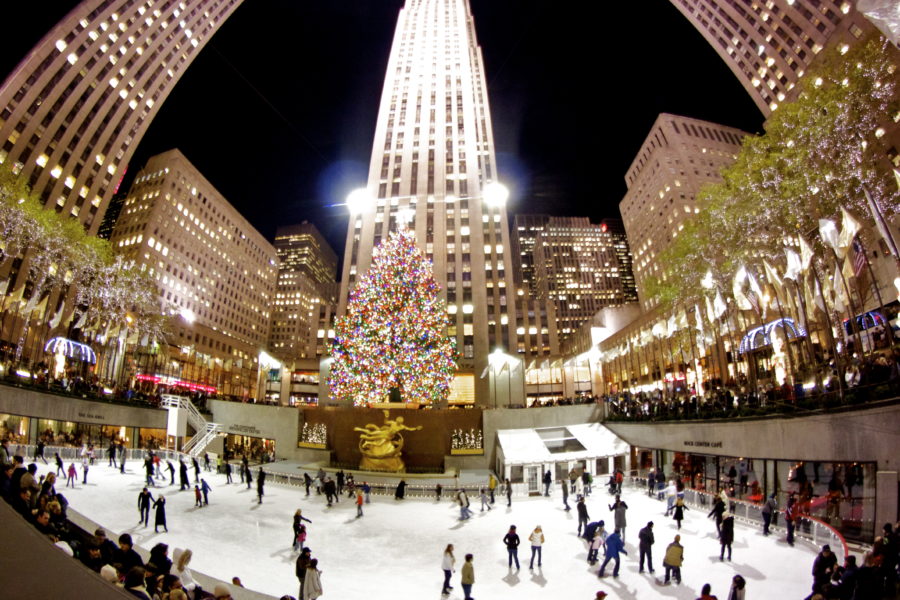 There’s just something about the holidays in New York that seems to wrap the city up in a cozy blanket and infuse the otherwise cold, dreary days of winter with a warm glow. New Yorkers bundle up with mittens and puffer jackets holding bright, red Starbucks cups in hands. The streets of our fair city overflow with smiling tourists in holiday sweaters, all too eager to be shopping at Macy’s in Herald Square and be swept up in the New York holiday spirit. Decorations and lights pop up along the main avenues–from Madison Avenue to the tree at Rockefeller Plaza to Park Avenue.

Restaurants compete to offer the coziest, homiest ambiance with roaring fireplaces, hot chocolate and twinkling lights strung over their tables. It’s true, that us New Yorkers may take our city for granted on occasion but around the holidays there seems to be a reawakening of our love for New York and the beauty and happiness it inspires around the world. From the most decorated restaurant in the city to the multiple pop-up holiday markets, consider this your guide to enjoying the holidays in NYC.

1. Dinner at the Most Decorated Restaurant in the City 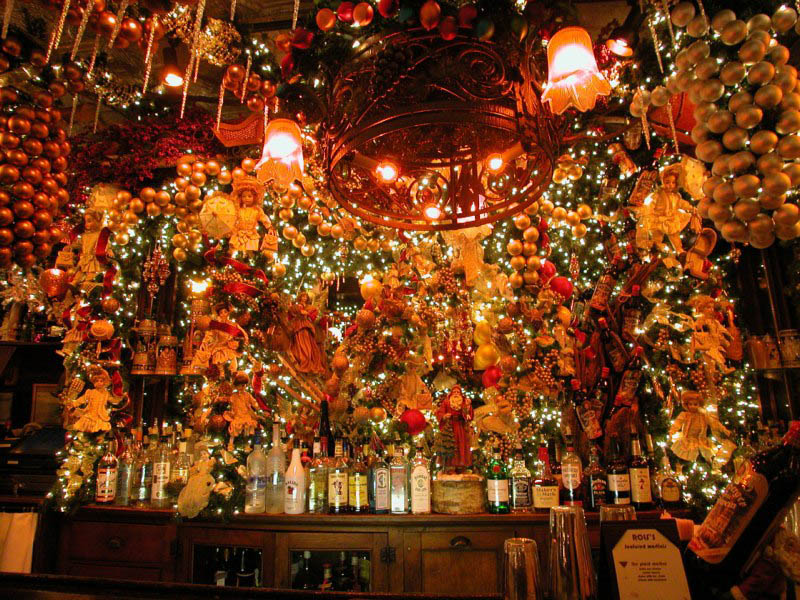 Tucked away in Gramercy, Rolf’s is overlooked by New Yorkers for most of the year until the holidays roll around and suddenly this German Restaurant becomes the place to snag a reservation at. What sets Rolf’s apart from every other restaurant in the city vying for attention is the sheer abundance of holiday decorations covering every inch of the space. Admittedly, the food at Rolf’s isn’t anything spectacular as it’s a swing and a miss attempt at classic German cuisine; but then again anyone coming to Rolf’s isn’t coming for the food on the plate–they’re coming for a spectacular visual treat. 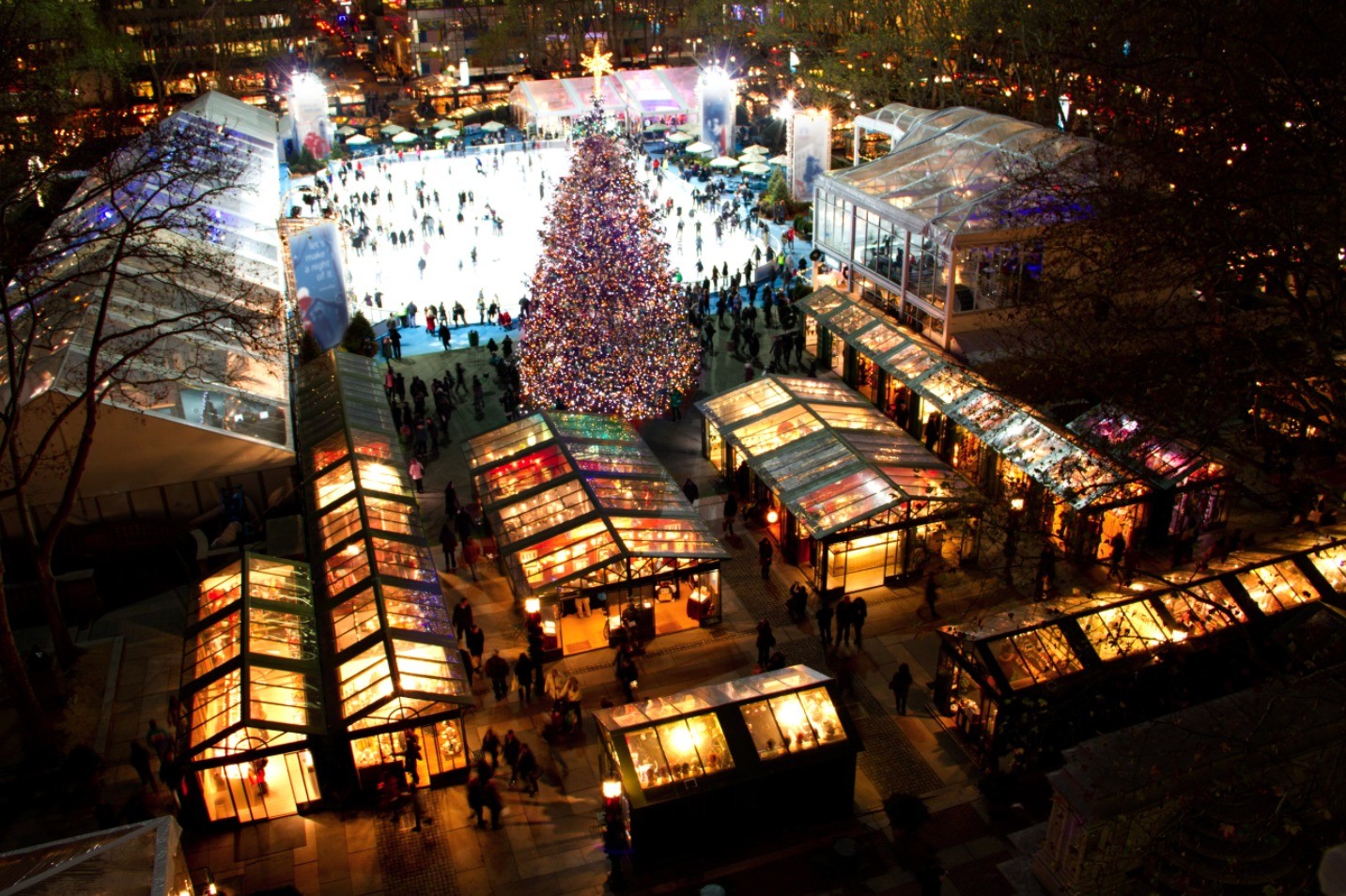 Every year, Bryant Park transforms from an outdoor haunt for working New Yorkers to grab a quick lunch to a sprawling winter village complete with an outdoor ice rink and holiday market. For tourists visiting the city, ice skating in Bryant Park is a great alternative to the crowded, long lines waiting around the Rockefeller Plaza ice rink. After ice skating and wandering through the holiday market, head to the nearby New York Public Library where the works of literary greats are housed under ornate ceilings. 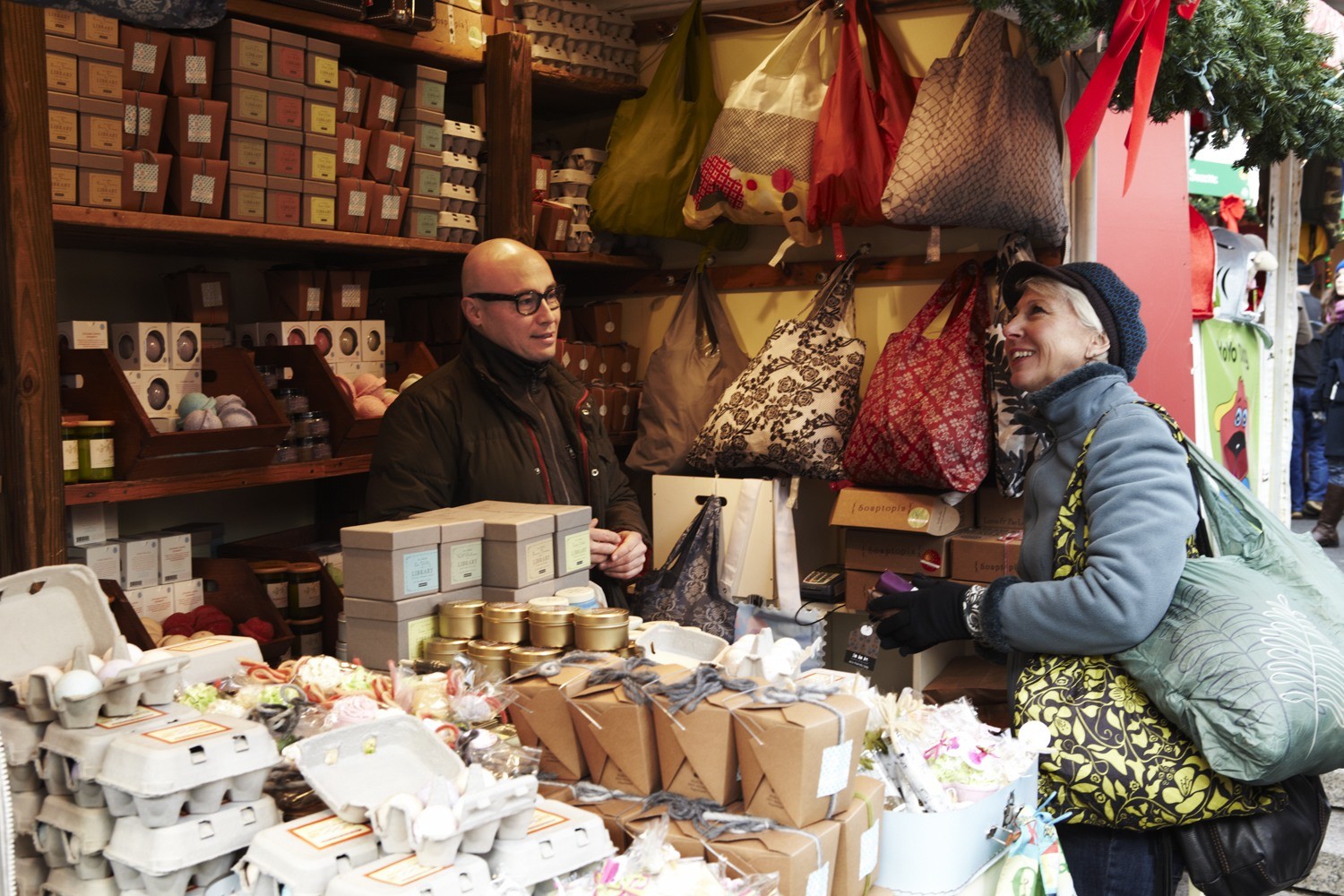 During the holidays, festive markets pop up all over the city–from Bryant Park to Madison Square to Union Square. Each market has its own personality–some are focused more on food, others more on crafts, others geared more towards visiting families and their children. The Union Square Holiday Market pops up alongside the daily Union Square Greenmarket, which is around all year. The side-by-side set up makes for a perfect match as you can stroll through the farmer’s market for seasonal, locally sourced goodies such as fresh, hot apple cider, homemade pies, fruits and veggies brought in from upstate; and then head over to the neighboring holiday market to peruse the many stalls of artisan crafts.

4. The Classic Choice: A Visit to Rockefeller Center Plaza 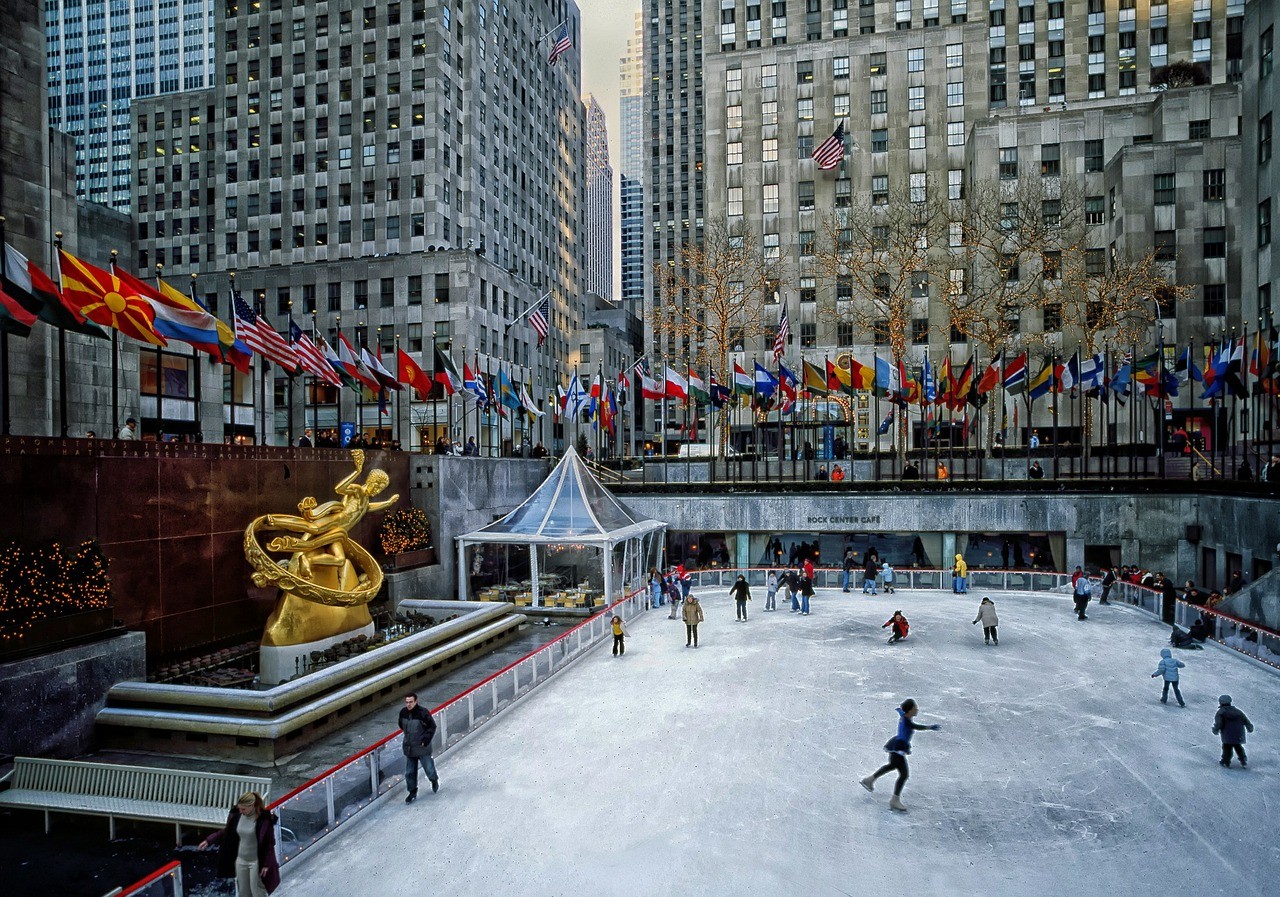 When people think of December in New York the image of Rockefeller Center invariably comes to mind. The iconic Rockefeller tree, the star-studded lighting ceremony, the nearby Rockettes performing at Radio City, the large ice rink at the sprawling (and crowded) Rockefeller Plaza. This year’s tree stands at 78 feet tall, is decorated with over 45,000 LED lights and topped with a stunning Swarovski crystal star. The Rockefeller tree is already lit but you can go enjoy the classic New York City tradition of visiting the tree, seeing the Rockettes and then enjoying a Magnolia Bakery cupcake on the corner of the Avenue of the Americas and 49th Street.

5. Seeing the Light Displays on the Main Avenues

From the light show on the building of Saks Fifth Avenue to the red bow wrapped around the Cartier store to the lit up trees along Park Avenue, around the holidays New York City—already a city of lights–lights up even more. Every corner of the city seems to be wrapped in twinkling lights, red and white stripes, large ornaments and music. When visiting NYC, stroll along 5th Avenue, Park Avenue and Madison Avenue for some stellar light and window displays.

Since the 1930s, the Rockettes have performed at Radio City Music Hall and are best known for their unison, high kick chorus line. During the holidays, the Rockettes perform their Christmas spectacular 5 days a week to New Yorkers and tourists alike. Today, the Rockettes Christmas Spectacular is one of the most watched live shows in the United States drawing over 2 million viewers each year.

7. Step into a Fantasy with the New York City Ballet 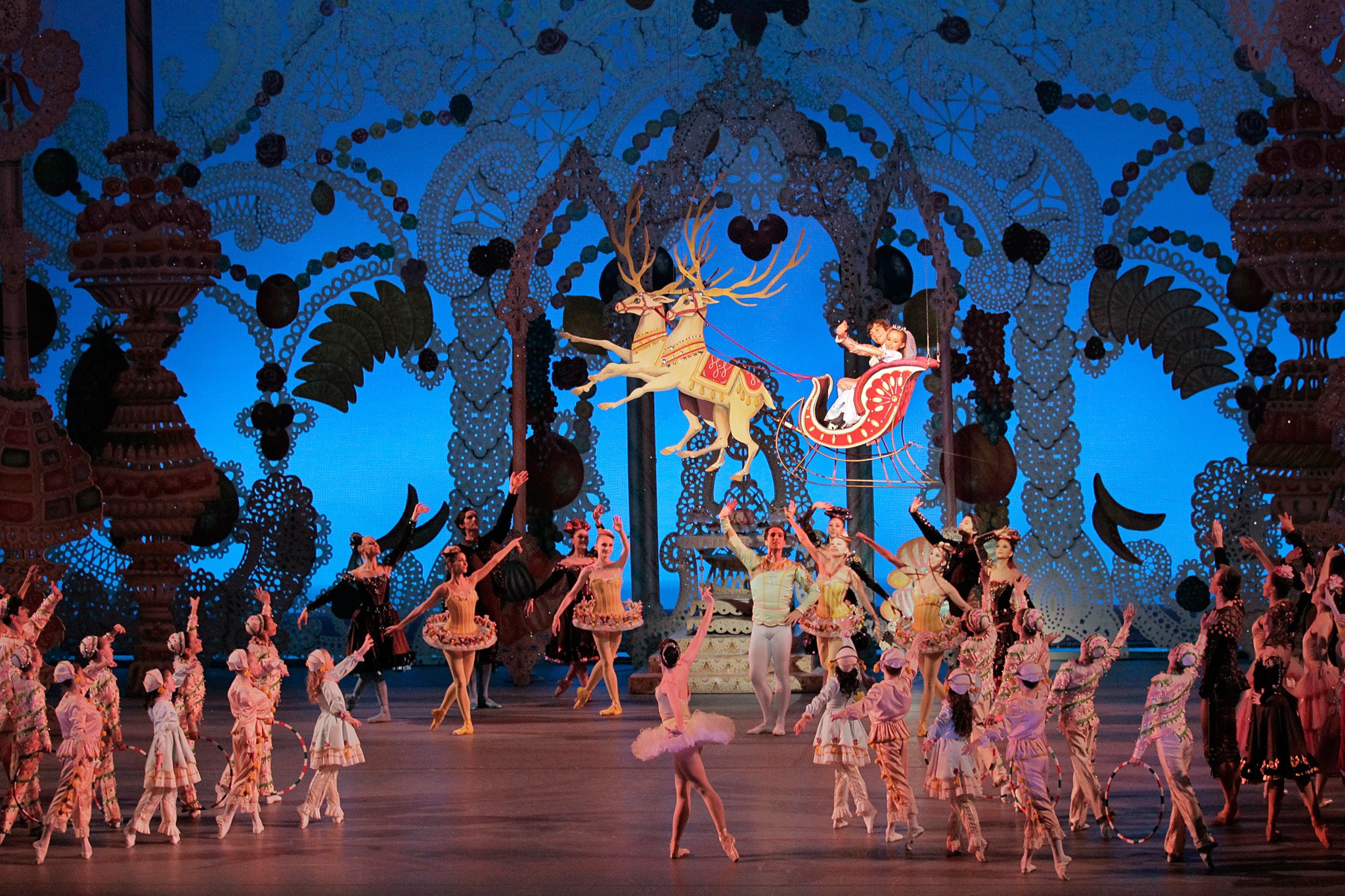 Every year the New York City Ballet company puts on their performance of George Balanchine’s The Nutcracker. With elaborate costumes, set designs and classic music; the Nutcracker performance is like stepping into a fantasy where visions of the sugar plum fairy dance across the stage at Lincoln Center. Whatever your holiday tradition is–be it snuggling up at home for a holiday movie with the ones you love, walking along avenues to see the Christmas lights, ice skating under the silhouette of buildings or donning a dress to watch The Nutcracker; New York City has a bit of everything. Happy Holidays, travelers!

What are your favorite holiday traditions? Share them in the comments section below!