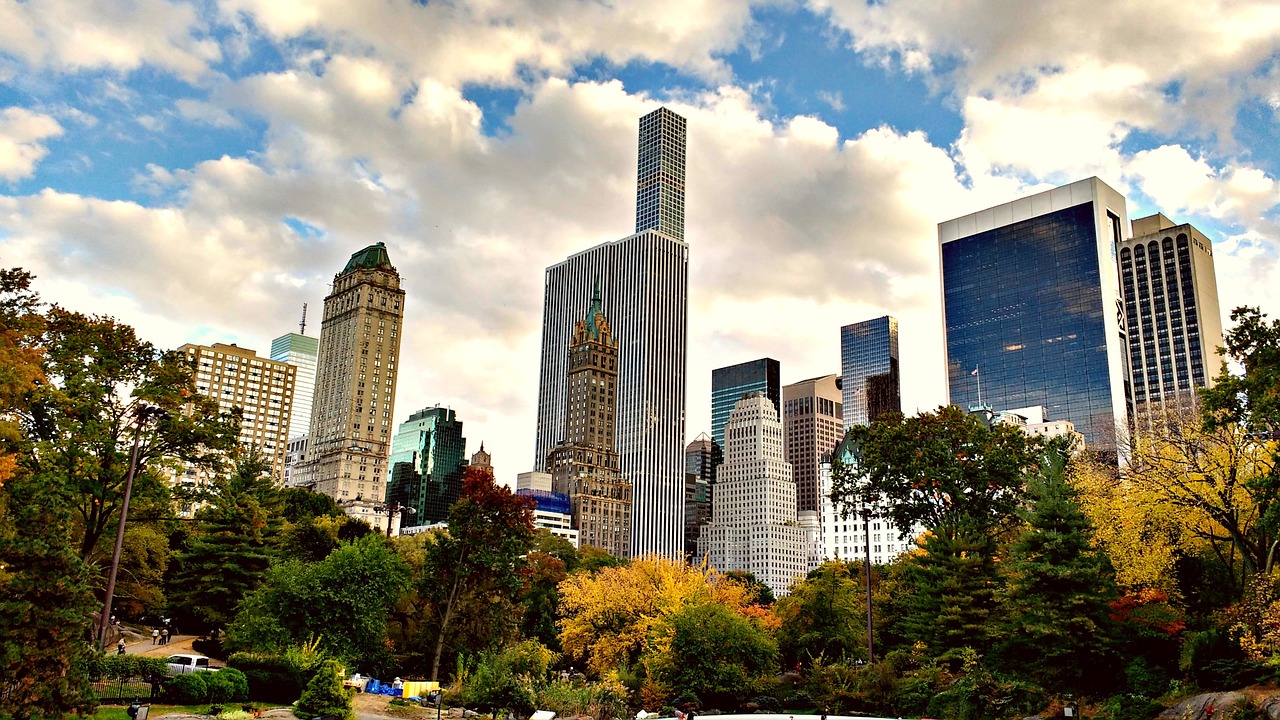 It is the first cold day in New York and I’m wearing a chunky, black knit sweater while sipping a cinnamon dusted cappuccino. I’m at my local coffee shop and the light breeze blowing through the trees seems to be whisking away any remainder of summer. This is my favorite season in New York; a time when the leaves in Central Park change from green to orange, red and brown; sweaters and tall, leather riding boots come back in style and languidly sipping Pumpkin Spice Lattes on the steps of brownstones becomes the norm.

The city becomes a bit more cozy and a tad more playful as the weather cools and Halloween lingers just around the corner. From historically haunted nooks around the city to evenings of slow jazz and eerie performances, autumn in New York is a wonderful time of year offering endless ways to enjoy the city, the season and Halloween. 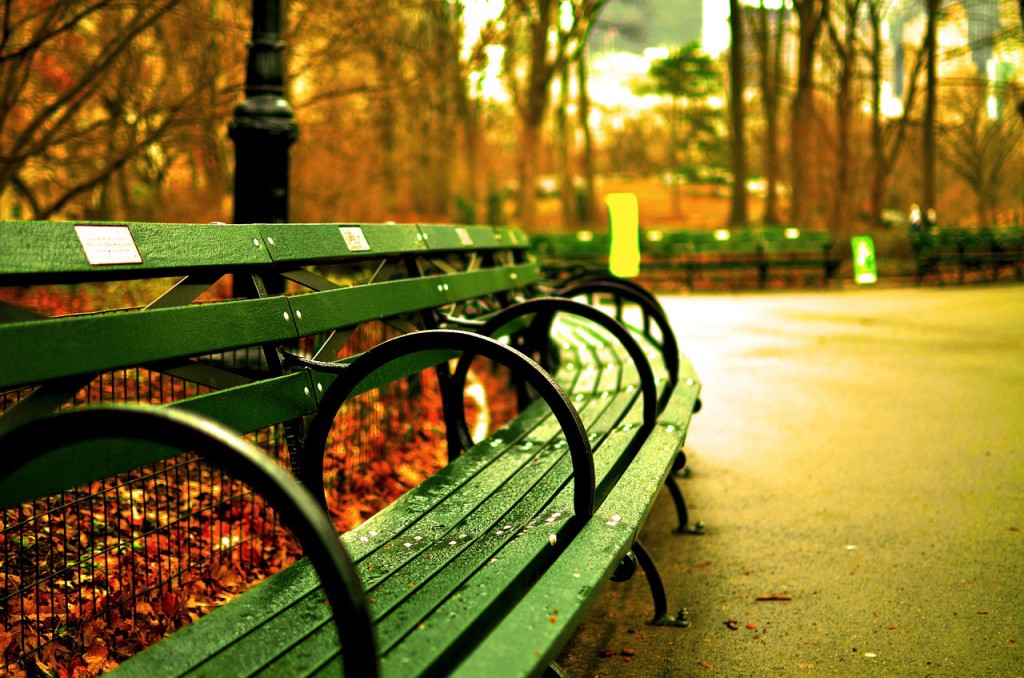 Central Park in autumn is a dream; the way the sunlight filters through the darkened leaves, the foliage that carpets the sidewalks, the red and brown colors that blend together like a Monet painting–at once stunning and humbling. I’ve fallen in love against the backdrop of Central Park, have beautiful memories of laying side-by-side with love’s glitter tossed playfully in my eyes enamored by the man next to me and the scenic surroundings. It goes without saying that enjoying Central Park in the fall is something everyone should do. Grab a Pumpkin Spice Latte and lose yourself in the park’s beauty. My favorite spots in Central Park include: the Bow Bridge, a beautiful cast iron bridge built around 1860 that is utterly romantic and the Conservatory where little kids and their parents will come sail toy boats across the basin. 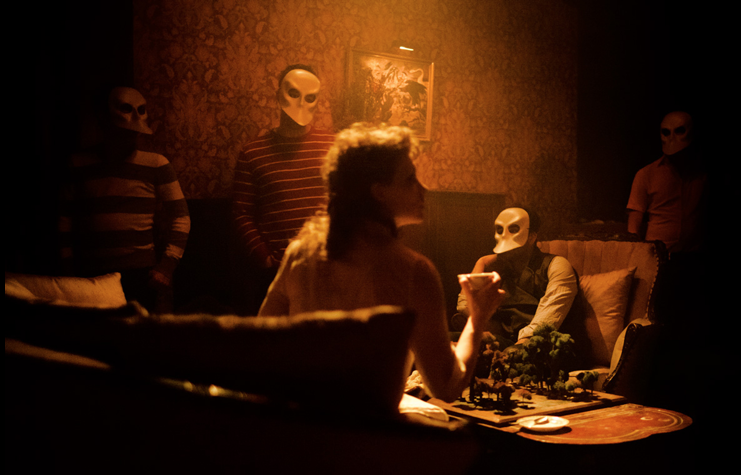 Ask me what to do in New York for Halloween and I will always offer the same suggestion: Sleep No More. Sleep No More is an interactive theater production put on by the talented folks at PunchDrunk. Taking place at an abandoned New York hotel-turned theater set, Sleep No More is based on Shakespeare’s Macbeth and is bound to be one of the most interesting experiences you’ll have at a play. Without spoiling too much, when you enter Sleep No More you’ll be taken to the Manderley Bar that feels like something taken straight out of the 30s. Slow jazz plays, champagne flows and the room is smokey offering an ambiance that is equal parts eerie and sexy. When it’s time to enter the “hotel,” you’ll be handed a Venetian-style mask meant to distinguish between the players and the guests. The production acts almost as a “choose your own adventure” play where you can follow actors around the hotel; ultimately giving you a different experience from someone else. Sleep No More transports you to a different world and while it’s not a haunted house in the classical sense (no one will be jumping out at you) it definitely is creepy. 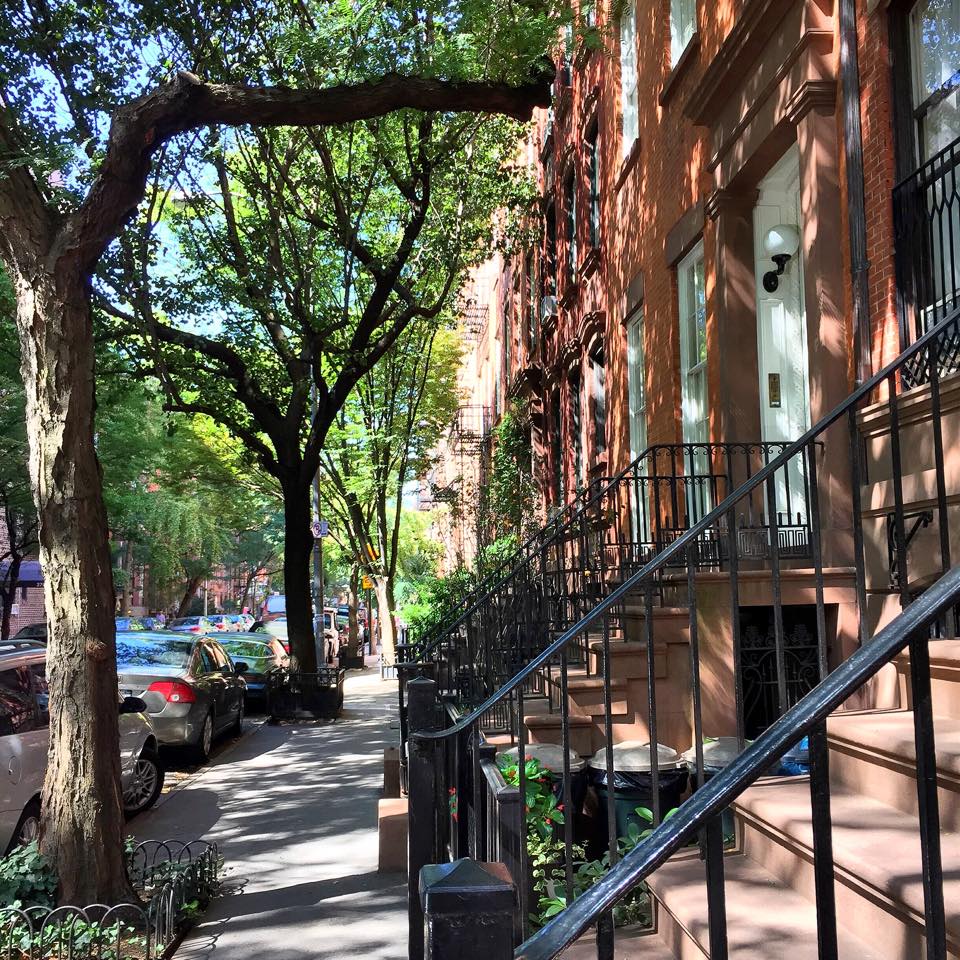 My mother and step-father have a tradition: whenever it is Halloween the two will venture someplace with a spooky history. Last year it was London, the year before Salem and the year before that it was New York. When my parents came to New York they signed us up for a New York Ghost Tour in Greenwich Village. Admittedly, my eyes rolled out of my head at the thought of taking a walking tour in my own city but after learning about the creepy stories that riddle the village I am glad I joined the tour. From White Horse Tavern where the ghost of poet Dylan Thomas is said to fuel his prose with whiskey; to Mark Twain’s “House of Horror” the ghost tour is creepy and a lot of fun to experience around Halloween time. 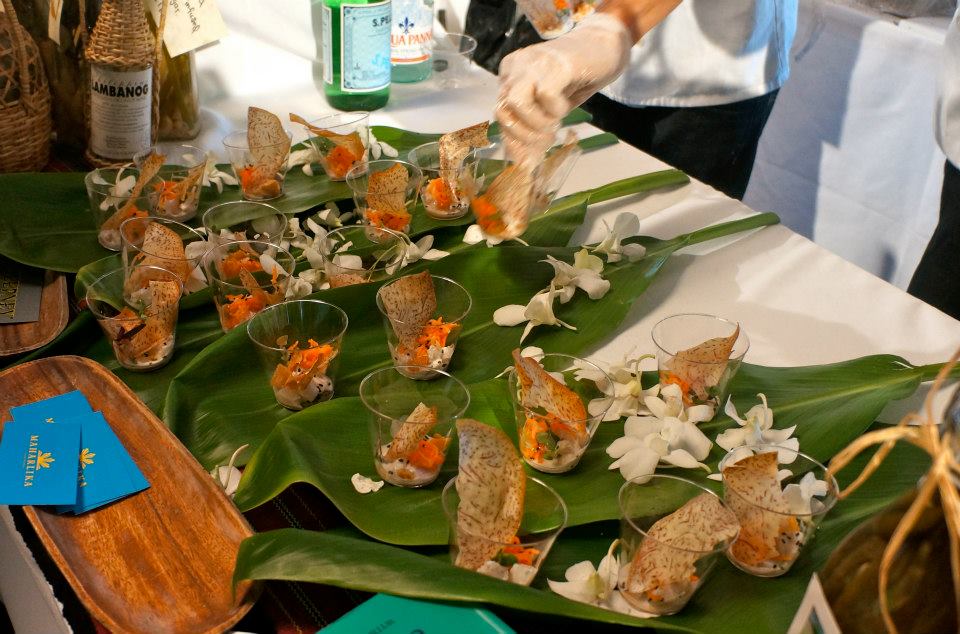 From October 15th to the 18th, the New York City Wine & Food Festival (NYCWFF) brings together foodies, culinary stars, sommeliers, chefs and industry for a weekend of delectable tastings, seminars on the latest food trends and coveted parties. Having worked at FOOD & WINE Magazine in the past, I had the good fortune of attending the NYCWFF one year and indulging in glass after glass of spectacular wine and plates of food prepared by chefs like Richard Blais and Mario Batali. The NYCWFF is a stellar event and for anyone with a passion for food, it is not to be missed. The Grand Tastings on Saturday and Sunday are the main draw as table after table of chef-prepared meals and drinks are offered up for guests to try. The NYCWFF is a ticketed event; you can purchase your passes here. 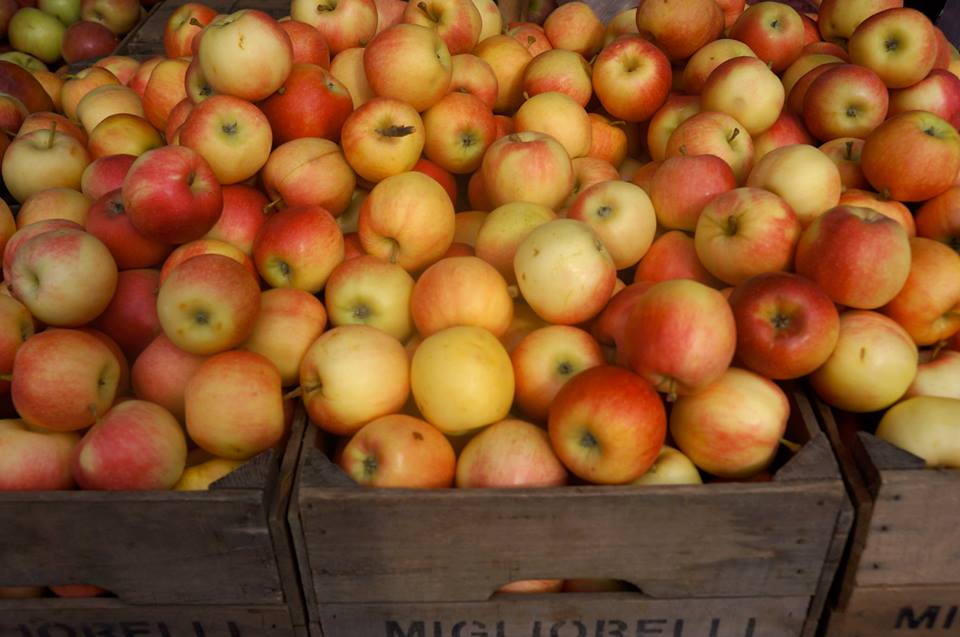 New York is the type of city where anything you desire can be easily found–from obscure ethnic cuisine to novelty items from decades past. The one thing that is difficult to come by in NYC (without emptying your bank account in the process) is fresh farm-to-table food. Yes, you’ll find farm-to-table at Whole Foods where they somehow justify selling asparagus flavored water for $6! True, you can find farm-to-table at high end restaurants where chefs bring first class ingredients and you bring a limitless credit card; but your best bet for farm-to-table is the Union Square Greenmarket that takes place every Saturday. The Greenmarket welcomes farmers and vendors from all over New York state to come sell their affordable fresh produce to the organic-crazed city slickers. In the summer the Greenmarket sells heirloom tomatoes, peaches, flowers and lavender and in the fall, you’ll find pumpkins, apple pie, cider donuts, apple and pear cider and, of course, apples. The Greenmarket is open year round but it’s the fall bounty that is by far my favorite and really brings in the flavors of autumn. 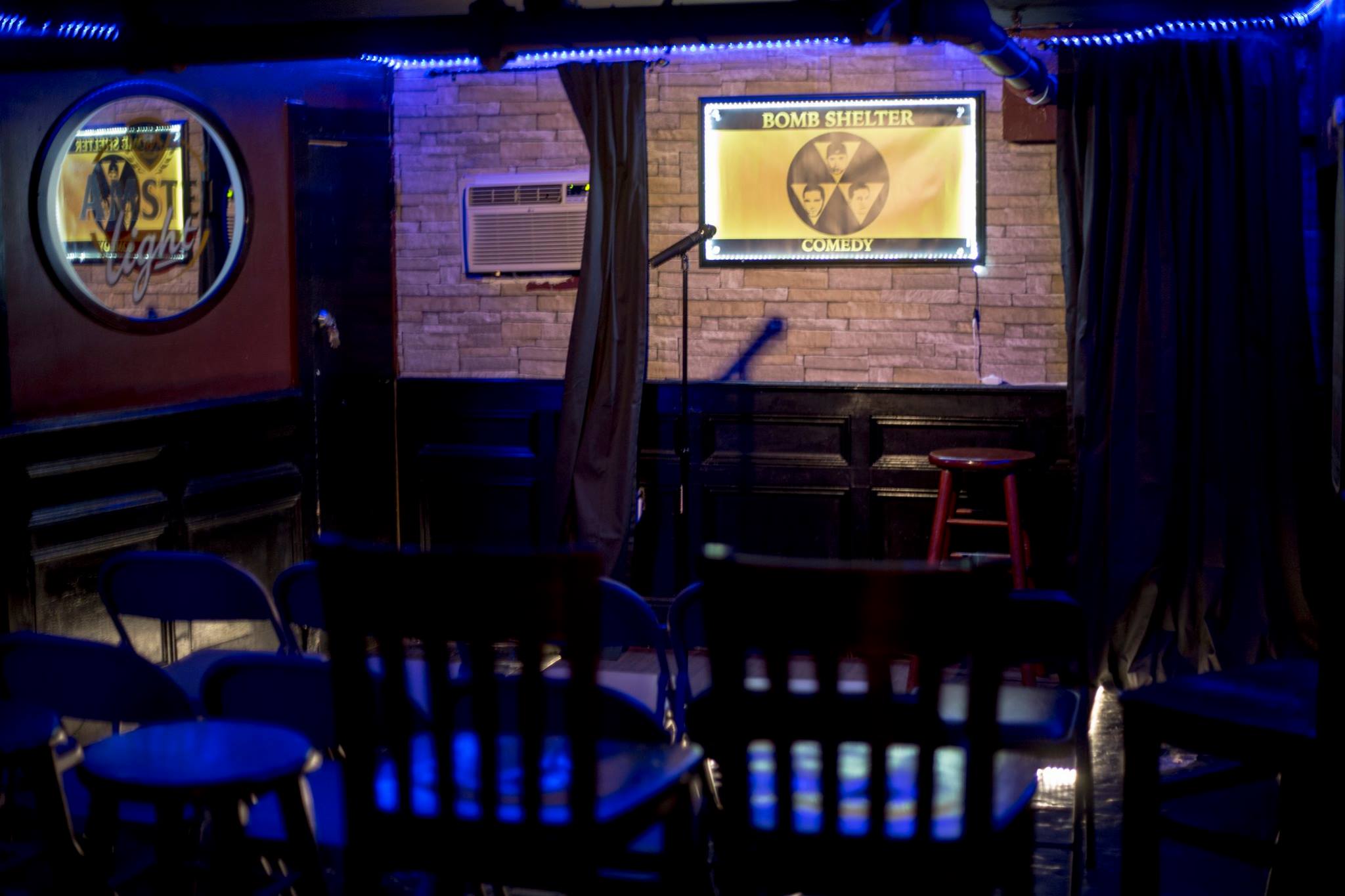 When you visit New York, seeing a comedy show is always high on everyone’s list. Lines of tourists stand in wrap-around-the-block lines for Caroline’s, the Comedy Cellar and other over-priced comedy clubs unaware that a free comedy show with the same, stellar comics can be found around the corner. One of my favorite local comedy shows is Bombshelter Comedy, run by talented local comedian and filmmaker Jeff Cerulli and fellow comics, Matthew Azark and Erik Bransteen. Bombshelter takes place every Thursday at The Gaf West in Midtown Manhattan. The show has seen the likes of fantastic comedians who have performed on Comedy Central, Letterman, the Tonight Show and more. Offering free pizza, free comedy and $3 beers; you can’t go wrong with this show!

The bar is hazy and the stage has an ethereal glow outlining the silhouette of the musicians on stage. The music is sexy, slow and romantic–it’s almost hypnotic and somehow seems to be the beat of New York the way Edith Piaf is the voice of Paris. You’re sipping a cocktail, losing yourself in the sounds of New York and a little something called jazz. Jazz clubs in the city are part of NYC’s identity; two of my favorite spots to listen to live jazz are Bemelmans Bar and Jules Bistro. Bemelmans Bar is in the famed Carlyle Hotel in the Upper East Side and is known for its painted wall covered in the drawings of Ludwig Bemelmans Madeline character. Bemelmans is upscale and features a piano in the middle of the room and accompanying musicians–be warned though, it’s a pricey bar! Jules Bistro, on the other hand, is an affordable French restaurant in the East Village that features live jazz on a nightly basis. The food at Jules Bistro is fantastic, inexpensive and accompanied by great music–it’s my favorite place to go in the city. 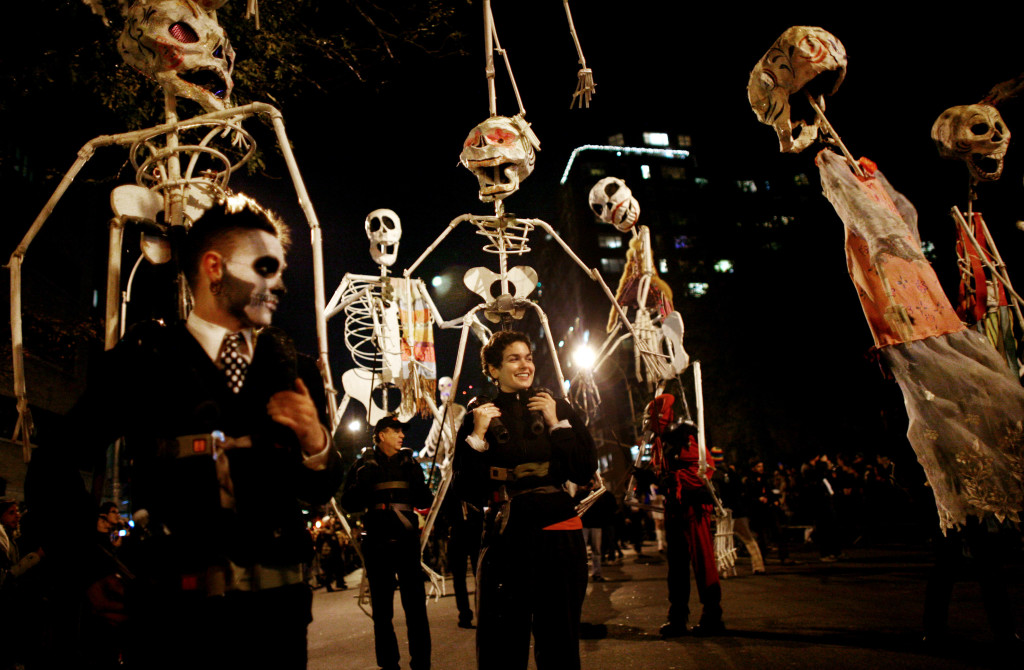 The creme de la creme of Halloween costumes can be spotted at the annual Village Halloween Parade, which takes place on Halloween at 7pm. Winding its way through the village, the Halloween Parade is a creative display of people’s imaginations come to life in the form of unique costumes you won’t find at Party City or any other costume shop. Come watch the show or join in yourself for autumn in New York is a time of revelry and mystery; a season where you can fall in love against the fall foliage in Central Park or find spooky spots in places you thought you knew.

For more spooky travel destinations, check out my post THE MOST HAUNTED RESTAURANTS IN THE UNITED STATES and share your favorite fall activities in the comments section below!