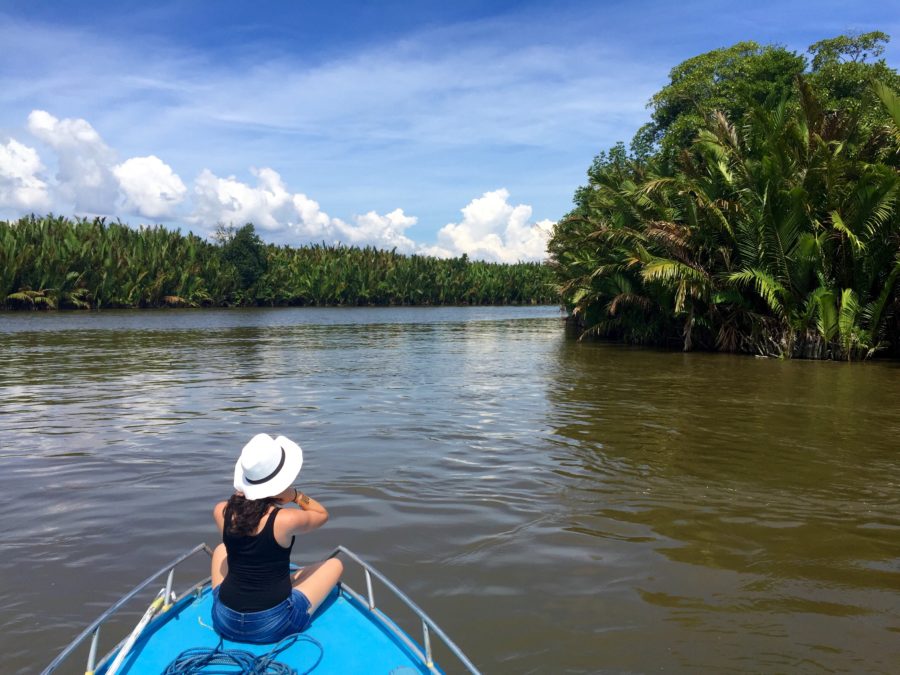 Afternoon in Borneo. The sweat drips down my body, filling every curve and crevice. My knees, my stomach, my neck are all damp as the jungle wraps itself around me like an uncomfortable sweater. My legs are streaked in dirt, covering layers of mosquito spray and suntan lotion beneath. More than twenty four hours on a riverboat and my transformation from clean-washed city slicker to Jungle Jane has been nothing short of extraordinary. If given another few days in Borneo, I just might grow accustomed to mosquito net clad beds and mud-streaked limbs. After nearly 48 hours in the jungle, perhaps I already am.

I’m walking along the trails of Camp Leaky—one of the oldest animal research centers in the world—specializing in the conservation and protection of wild orangutans in Central Borneo. Camp Leaky was established in the 1970s and is an ongoing research project exploring the nuances of orangutan behavior and their social dynamics. Before Camp Leaky, orangutans—native only to Borneo and neighboring Sumatra—were driven to the brink of extinction. More than 8 million acres of South East Asia’s forests have been destroyed in the name of Palm Oil plantations. The profitability of palm oil—an ingredient used in everything from soaps to snack foods—tosses dollar signs in the eyes of many; leaving wildlife—such as orangutans—as victims. It’s a classic story of greed, profit and collateral damage in one of the world’s last bio-diverse sanctuaries.

Tourism in Borneo is of grave importance now. The need to attract people, showcase the local wild orangutans and inspire action are what draw travelers to this remote island between Malaysia and Indonesia. I am traveling with a group of strangers; mostly writers brought together from various countries for the sake of shining light on Indonesia’s less visited destinations. I guess you can say I’m a travel writer. Like my fellow trip mates, I have come to South East Asia on the wings of my writing—a reality I still have trouble grasping. Admittedly, my life as a travel writer is an odd juxtaposition. On one hand, I am afforded travel experiences around the world—a visit to Borneo, a camel trek in Morocco, a market tour in the Philippines—on the other hand, I cringe each time I check my bank account balance when back in my over priced, undersized New York apartment. Since leaving my career in advertising, calling off my wedding and moving into a new apartment—all in pursuit of a travel writing dream—I have felt both free yet lost. Financial woes nip at my heels while the promise of the next great writing assignment beckons from behind every corner. It’s why I’m now in Indonesia—despite being in dire need of a reliable source of income—I flipped my life upside down in pursuit of this passion. When it calls me, I come running—even if I’m running across the world for it. 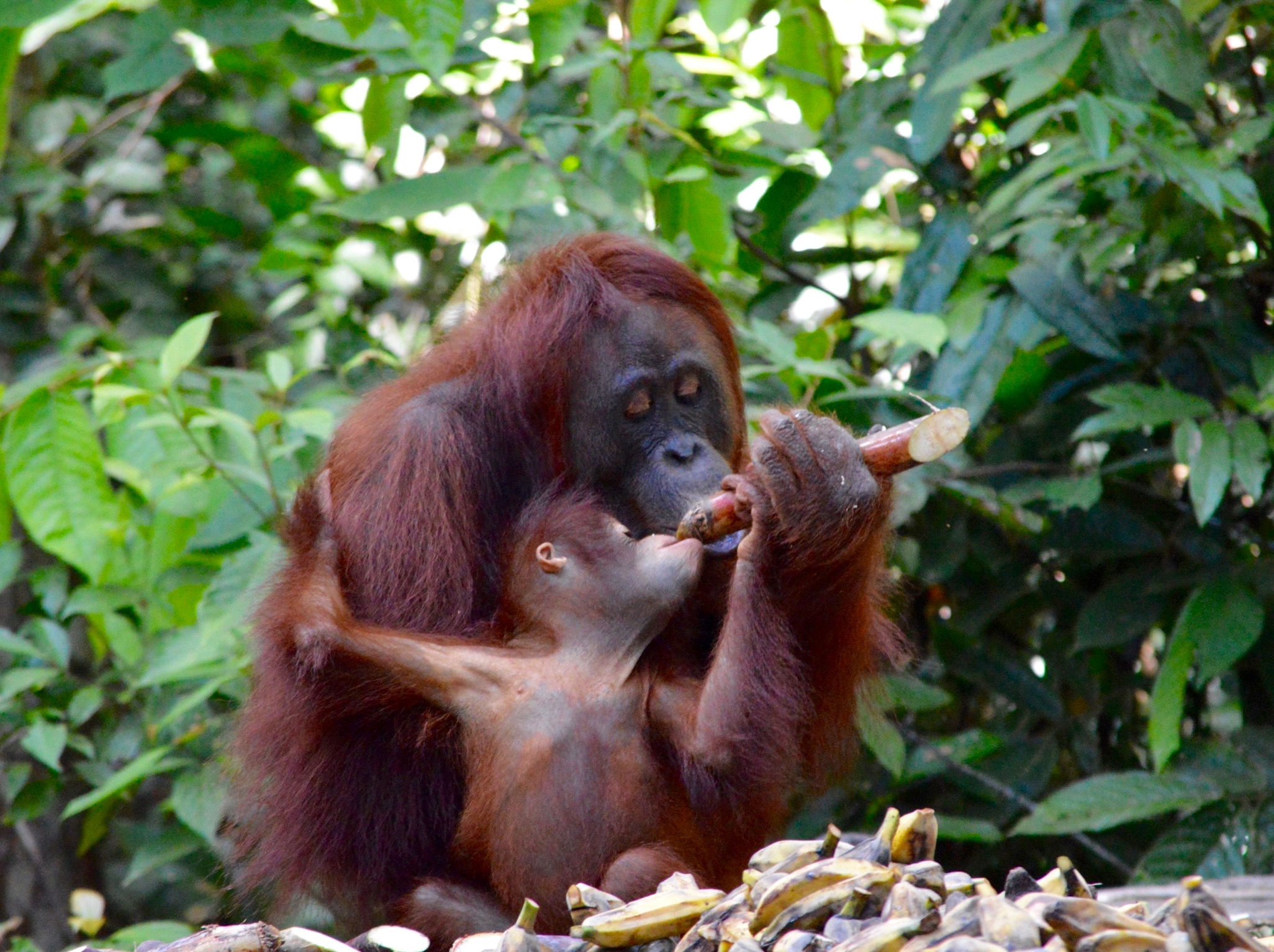 A hike from Camp Leaky’s riverboat dock finds my fellow travelers and I at a feeding observation spot in the middle of the Borneo jungle. Set up like an inverse zoo, humans sit in a roped off enclosure while wild orangutan munch on bananas just feet ahead. A row of rickety, wooden benches placed in front of a single, nylon rope separates visiting tourists from the large apes. It’s the way animal viewing should be; without cages, crowds and ticket lines. The red-orange fur of the orangutans glows as the afternoon sun hits their backs. A bald, baby orangutan clings to its mother like life support as she gently feeds him. A younger male orangutan—the ape equivalent of a teenager—proves mischievous as he bundles bananas in his arms and slinks off into the trees with his loot. I’m inches from the rope, entranced by the orangutans in front of me. Their interactions play out like some sort of Borneo-style soap opera. There’s the doting mother, there’s the trouble making neighbor, there’s the stubborn father. The very word “orangutan” is a Malaysian/Indonesia word for “people of the forest” and as I watch these animals with their human-like tendencies, I can see why.

After what feels like an hour, I turn around and am confronted with a handful of unfamiliar faces. My group has gone back to the riverboats without me. It’s an honest mistake given both the size of our group and the fact that we’ve all just met three days ago. Rather than wait to walk back with a local guide, I decide to hike back towards the river boats. I assume my group is only minutes in front of me. I assume I’ll run into them during the hike. I assume the walk is simple enough: follow the trail, go to the boats. I remember the walk being quick—no more than ten minutes or so. Soon I am engulfed by the Borneo jungle. The verdant trees and gentle whir of cicadas fill my senses; eclipsing any sense of human life in the vicinity. 10 minutes go by, then 15, then 20 and whatever recognizable surroundings I thought I had are lost to the trees surrounding me. 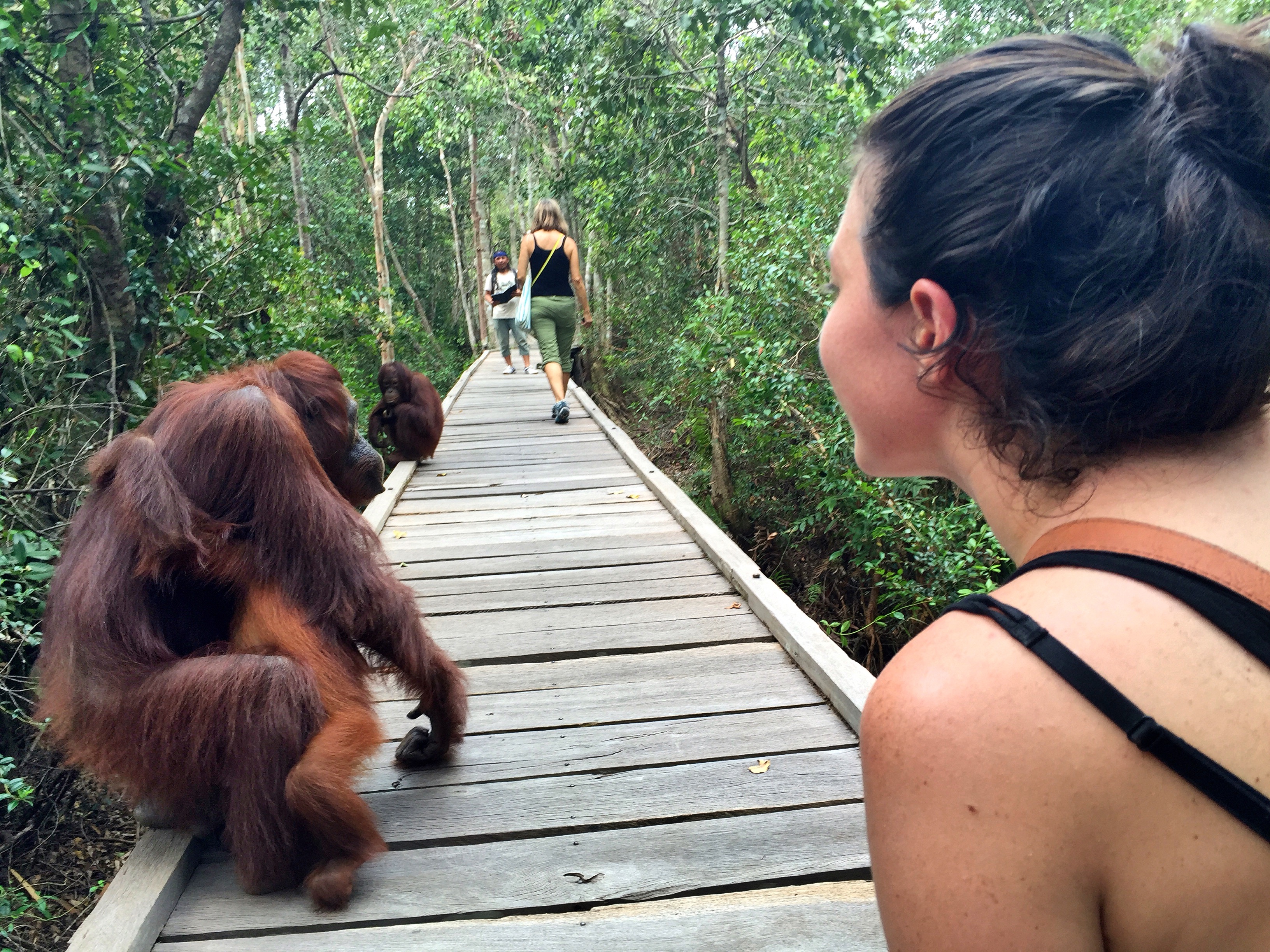 As I walk, I spot a wild boar standing squarely in the path in front of me. The same wild boar had been lurking in the bushes by the orangutan feeding, waiting for a stray banana to be tossed his way. He’s large, dirty grey and dumbfounded by the lanky human standing just feet from him. I am immediately intimidated by his tusks (are they called tusks?). He eyes me suspiciously, confidently, as if to remind me whose home I’m in.

I stand stark still as the boar walks by me, keeping my eyes trained on the ground so as not to threaten or appear confrontational. Still no humans. I keep walking until I reach a divide in the path. Do I go left? Right? Straight? I have reached this divide in my life countless times. As a bride-to-be on the brink of a wedding; as a college-graduate deciding what her next step would be, as an unhappy career woman in New York choosing what her life’s purpose would be. I have found myself at this metaphorical fork-in-the-road plenty of times but here in the jungles of Borneo there is no time for higher meaning. 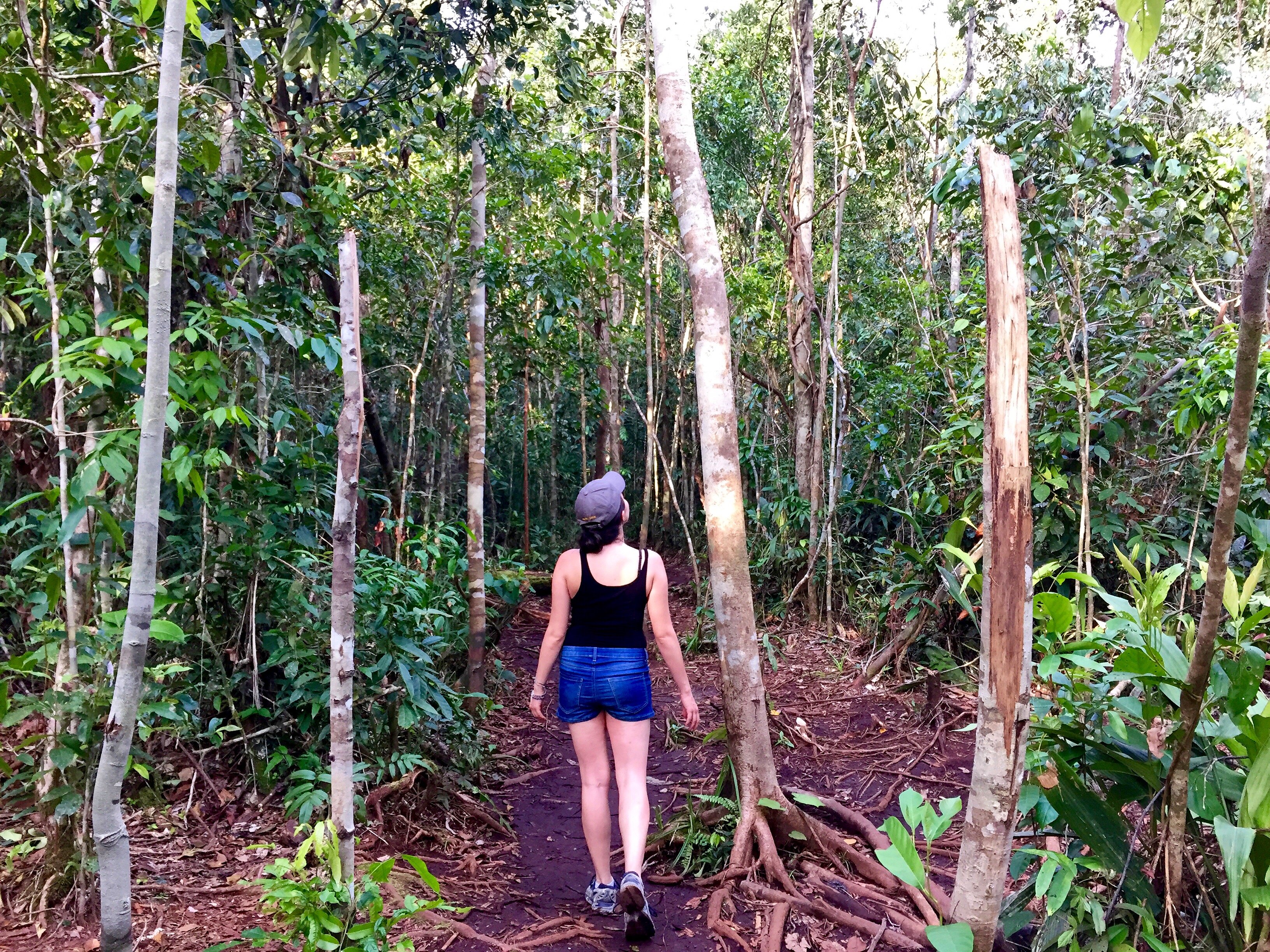 It’s the details that stay with us. The alarming snap of a twig in the nearby bushes. The sinking feeling of stress that hits the stomach. The dawning realization that I took a wrong turn and am lost. The self-reprimanding that kicks in for choosing to hike the jungle without a guide. The promise of large, dangerous animals hidden amongst the leaves. The haunting echo of a call for help. The deafening silence that follows. With the sun setting over the jungle, I realize that I need to find my way back to the river boats before night falls. I know from the previous night that an evening spent in the jungle without water, bug spray or a sweater for when the temperature drops is detrimental. Not to mention the animals. I assume my group, which is divided amongst four to five riverboats, has realized by now that they’re missing a person. I know that the likelihood of the riverboats leaving without me are slim; I just need to find my way back to them.

I look at the three trails ahead of me. Right, left, straight. To risk going down any of these trails will only lead me further astray into the wilderness. My stomach is twisted in knots as I stand there weighing my options. Right, left straight. Right, left, straight. There are no markers, no signs, nothing but compacted dirt trails that I am left to assume are from feet before me. I decide to turn back, knowing my safest bet is to go towards the feeding observatory. Even if no people are left at the clearing, I know it is my best chance of finding a local guide. I am sweating profusely now–-a side effect of the oppressive jungle heat. My water bottle has about two sips left.

Helloooooooo! Is anyone out there?!

As I walk, I let my voice ring out amongst the trees in hopes of catching the attention of someone–anyone–in the vicinity.

My voice becomes more panicked as the minutes pass. Finally, one of my calls gets a faint response. I follow the sound of the voice until I reach a local guide escorting two backpacking tourists to the river boats. The three seemed surprised and somewhat amused at the sight of me. Can I blame them? Walking in Borneo you expect orangutans, wild boar and other animals; but to see a pale, panicked, Westerner emerging from the bushes like Tom Hanks in Castaway? That’s unexpected. A wave of relief washes over me as I follow the three safely to the docks; realizing as we walk that I would have definitely taken the wrong path further into the jungle. My fellow travelers are waiting by the docks—already settled on their respective riverboats. Some wonder where I’ve been. Others unaware I had been gone. I can’t help but laugh incredulously at both how flippant yet imperative moments in life can seem. Back on the riverboat, I begin writing about my time in Borneo. I write about curious orangutans, about threatening wild boar, about deep, green jungles and about 20 minutes that feels like a lifetime spent lost in the wilderness.

Have you ever gotten lost while traveling? What’s one of your scarier travel memories? Share them in the comments section below! 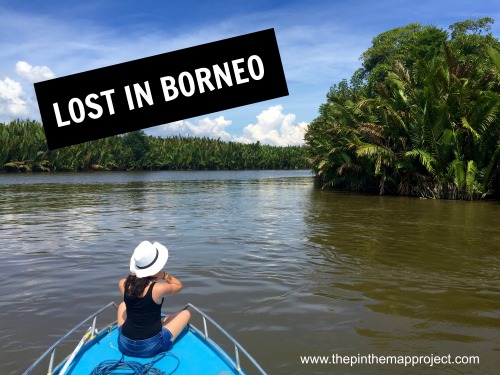