Before my plane touched down on the tarmac in Manila, I was already anticipating my first savory bite of South East Asian fare. Countless books, television shows and films had left me dreaming about the classic plastic stools, balmy fragrant air and complex flavors that are unique to this part of the world and their bustling street markets. I longed to follow in the footsteps of chef-turned-writer Anthony Bourdain, famed food writer Graham Holliday or travel writer extraordinaire Bill Bryson who all drew inspiration from the exotic culture and cuisine of the far East; and so–with only 96 hours notice–I boarded a plane bound for the Philippines. 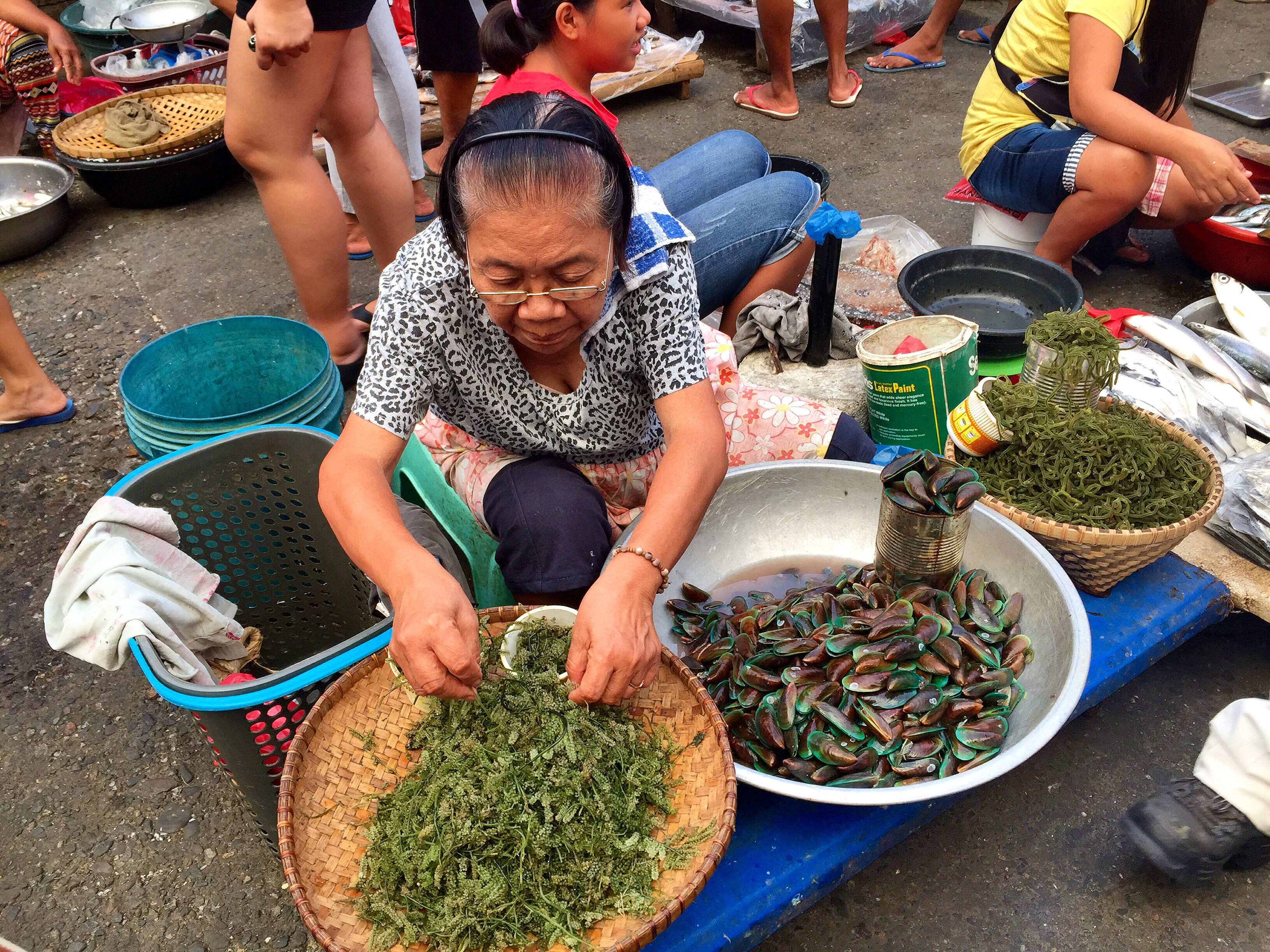 From the empanadas served on the street to the Chinese-inspired noodles, the Philippines has an international palate as new cooking styles and ingredients continue to shape and influence its cuisine. Over the years, Filipino food has been largely influenced by other cultures. Historic trading with the Chinese introduced new staple foods, spices and cooking methods to Filipino culture; while Spanish colonizers in the 16th century brought over chilies, peppers and the method of sautéing to the more than 7,000 islands that make up the Philippines. Filipino fare centers around three pillars of taste: sweet (tamis), sour (asim) or salty (alat) and vinegar is a popular ingredient and/or condiment in most meals; the balance of these three tastes plays out like a dance in almost every meal that seems to awaken and challenge your taste buds. While traveling to the Philippines I met with local blogger, Micaela Rodriguez of Senyorita, who introduced me to Filipino food and some of the Filipino dishes every traveler should try.

Perhaps my favorite Filipino dish that I ate while in the Philippines, Sinigang is a tamarind-based soup that is known for its sweet and sour taste. Often made with shrimp, chicken or fish, Sinigang is a symphony of flavors and the sort of hot, spicy, rich mix of flavors one hopes to find when traveling to South East Asia.

If a child could create their dream dessert, chances are it would look a lot like Halo-Halo. Halo-Halo is a classic Filipino dessert that is a mixture of fruit, ice cream, sweet beans, gelatin, shaved ice and evaporated milk all stuffed into an overflowing glass. It is the quintessential Filipino treat and antidote to the suffocating heat of South East Asia. Unapologetically messy, devastatingly sweet and filled with unidentifiable fruits and jello; Halo-Halo is an experience, more than just a dessert.

3. A Nod to the Spanish, the Filipino Empanada

I know what you’re thinking, why are empanadas on the Philippines food list? Empanadas are a large part of the Filipino street food culture and a nod to the 300+ years that the Spanish ruled the country. The Philippines’ empanada differs depending on what part of the country you are: in the Northern Philippines (where I was traveling) the empanadas contained chorizo, egg, bean sprouts and shredded green papaya. Unlike empanadas you may be used to seeing, the Filipino empanadas are noticeably orange due to the the addition of achuete (annatto).

4. The Unofficial Dish of the Philippines: Adobo

Considered the unofficial, official Filipino dish of the Philippines, Adobo gives a nod to the indigenous culture because of its cooking style of using vinegar for the meat. It’s said that in order to preserve meat longer, indigenous Filipinos would use vinegar and salt as a means of preservation, Adobo pays homage to that historic way of cooking and is perhaps the truest, Filipino dish on a list of food showing influences from other cultures. Adobo is often made with meat marinated in vinegar, garlic and soy sauce; the dish is sweet and the marinade lends the meat a soft texture.

5. A New Take on Fritters: Ukoy

Simply put, Ukoy is the Filipino version of shrimp fritters but unlike fritters that those of us hailing from the west may be used to, Ukoy consists of the entire shrimp. Eyes, feet, shell, claws are all sticking out of the Ukoy like some sort of tragic, shrimp massacre that’s been deep fried and served on a plate. Admittedly, the fritter is a bit jarring at first glance but tastes as one would expect: deep fried, crispy, shrimp goodness.

6. Intestines on a Stick: Isaw

Adventurous eaters need look no further than Isaw, the classic Philippines street food fare of chicken intestines on a stick. Before you wrinkle your nose at that thought of intestines, know that there is scrupulous effort to clean the intestines thoroughly before boiling, barbecuing and then dipping them in chili sauce for eating. The taste of Isaw is expectedly chewy, soft and can be bitter.

I will fess up here. I had hoped to try the famed Balut of South East Asia on my last day in the Philippines but unfortunately snagged a nasty bug that kept me looking like the Walking Dead most of the day. In short, Balut is on the top of my “dare you” list next time I head to South East Asia. For those who don’t know, Balut has the appearance of a hardboiled egg but actually contains a 3-week old fertilized duck embryo. The slightly less jarring cousin to Balut is Penoy, which contains a slightly underdeveloped embryo so you’re not chomping through beak and cartilage. Told you, this was an “I dare you” dish!

Sigig (which literally translates as “to snack on something sour”) is a dish of chopped up pigs head and liver served sizzling with calamansi and chili. The dish is savory and chewy and was recently featured on Anthony Bourdain’s Parts Unknown Philippines episode as the perfect post-drinks dish.

Ube is a purple yam used in the Philippines and when made into ice cream comes out as bright, purple and uniquely tasting. Not quite sweet, the Ube ice cream is unlike other ice cream flavors (who has had potato ice cream before?!).

Pinkabet is a classic vegetable dish in the Philippines made up of mixed veggies steamed in fish or shrimp sauce. Pinkabet Pizza, as you can guess, is a pizza topped with the Pinkabet dish and served with shrimp sauce on the side. The pizza is quite tasty!

Have you traveled to the Philippines before? Are you planning on going? Share your favorite Filipino dish below! 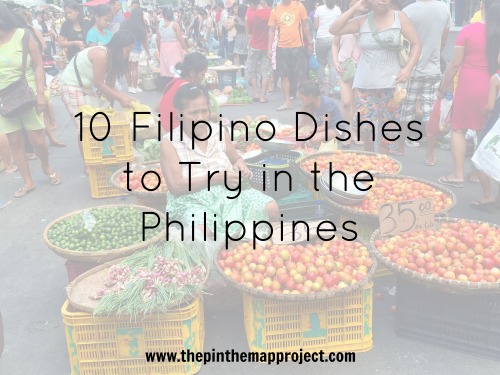