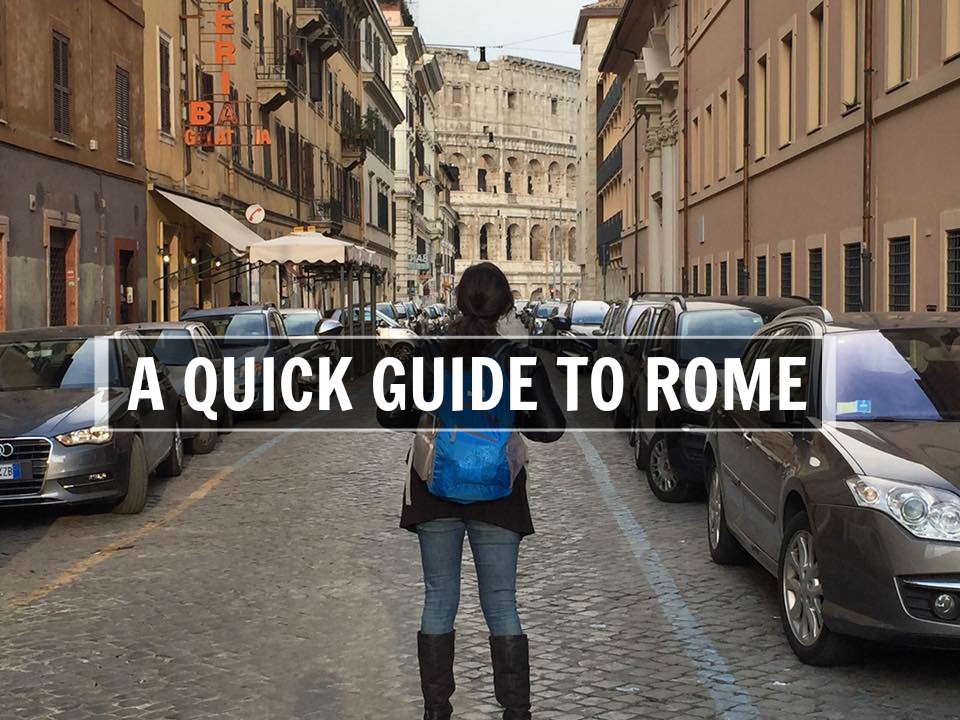 The last time I was in Rome I was a completely different person. I was freshly graduated from high school and dating a boy who–by virtue of my young age–I was convinced was the love of my life. On a whim, the two of us decided to go to Rome and max out our respective credit cards to afford the trip (to-date one of my more irresponsible financial choices that took years to pay off). Being young, in love and impulsive, we packed our bags for Italy where we spent more than we had, ate more than we could afford and lived with truly no regard for the future.

I remember being on that first flight to Rome and flipping through a pocket-sized guidebook eagerly circling clubs and bars I should visit in the city. Sure, I had read the history and was excited for the Colosseum and Trevi Fountain, but being underage in the States meant one thing to me when going to Europe: drinking. Suffice it to say, while I made a point to see Rome’s highlights, I did not appreciate my visit as much as I should have. 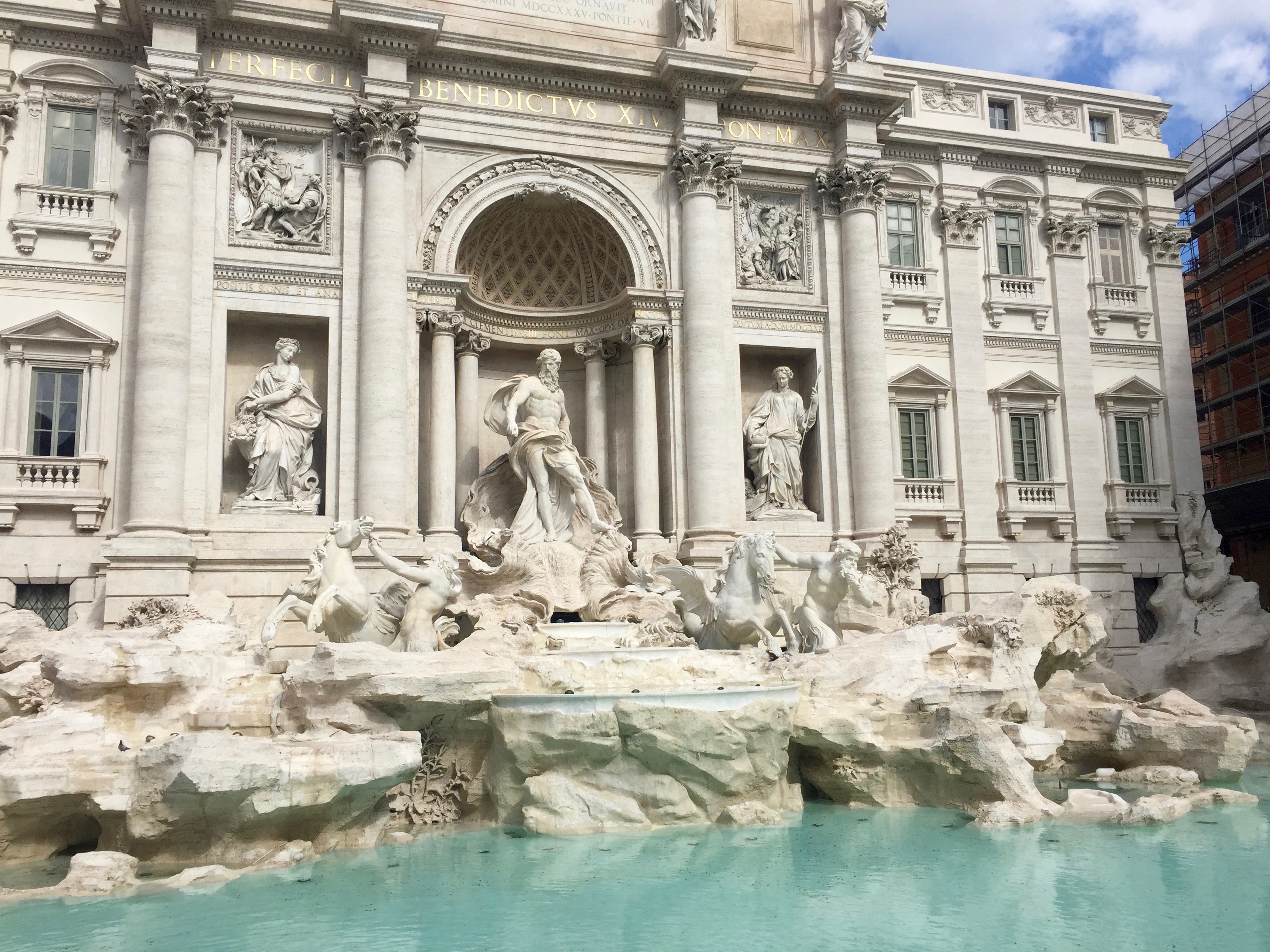 Flash forward to 2016. I am now 28 years old, a full time travel writer and well past the novelty of ordering a glass of wine. I head to Rome with my new boyfriend, Jeff, whom I share a life with back in New York City. Italy is the first stop on our whirlwind European adventure that takes us from Rome to Venice to Berlin to Amsterdam to Paris; four countries in the span of two weeks. Although I’ve been to Rome in the past, when we arrive it’s as though I’m seeing the city for the first time. The architecture! The flavor! The history! I am overwhelmed by how beautiful Rome is, by how every turn seems to promise your next best meal or a historic site that is seamlessly integrated with the modern day city.

This time I don’t bother to look at nightclubs or bars in Rome. I wake up early for market day in Campo di Fiori, I get tips from locals on the best pizzarias, I walk for hours through Trastevere, I listen to lone violinists play music over the Roman forum. I savor Rome the way Italians savor life; letting each moment melt in my mouth like a chocolate truffle. Rome is a city unlike any other and although there are endless things to see and do in the Eternal City, here is a quick guide. 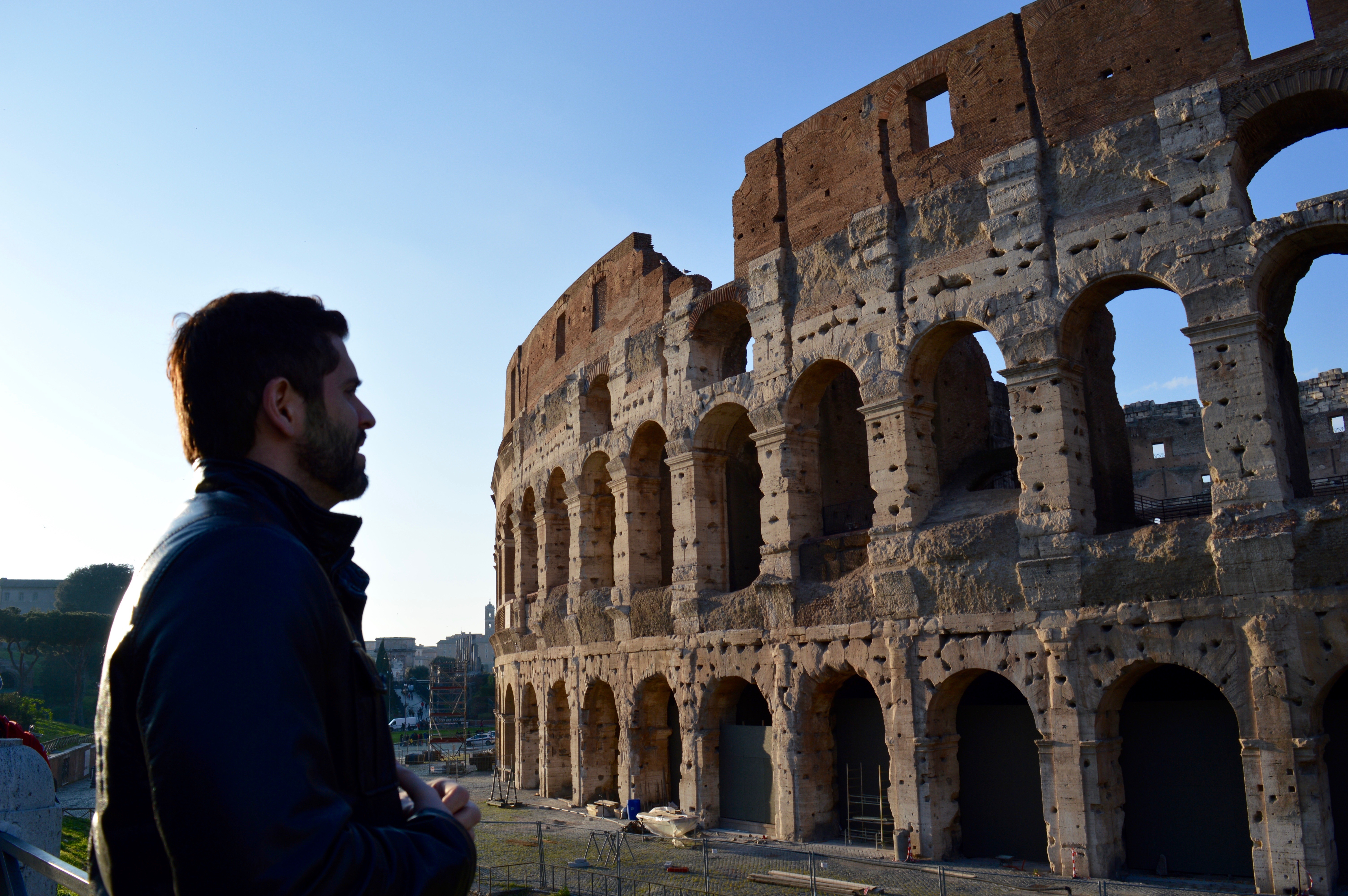 The iconic Trevi Fountain was designed by Nicola Salvi and is considered one of the most beautiful fountains in the world. The design of the fountain drips with symbolism. Contrary to what many think, the main figure of the fountain does not depict Neptune but rather the personification of the ocean. Also represented in the facade of the fountain are symbols of health, abundance, hygiene and more. Legend says that if you throw a coin into the fountain you are sure to visit Rome again! TRAVEL TIP: The Trevi fountain is free to visit but it gets crowded! Consider coming early or late to beat the crowds.

When people think of Rome they immediately picture the Colosseum. The Colosseum is in the heart of Rome and was built in 70-80 AD from concrete and sand and was once the site for gladiator fights. In its prime, the Colosseum could hold up to 65,000 spectators who would gather for spectacles. Today, the Colosseum remains remarkably intact despite suffering damage over time due to earthquakes and stone robbers. TRAVEL TIP: Tickets to enter the Colosseum are 12 euros and are best booked online to avoid ticket lines (and even snag discounted rates if an EU citizen).

Once the political center of Rome, the Roman Forum is historic and perhaps one of the more important ancient sites that Rome offers. Tickets for the Roman Forum are also 12 euros and are best booked online here. 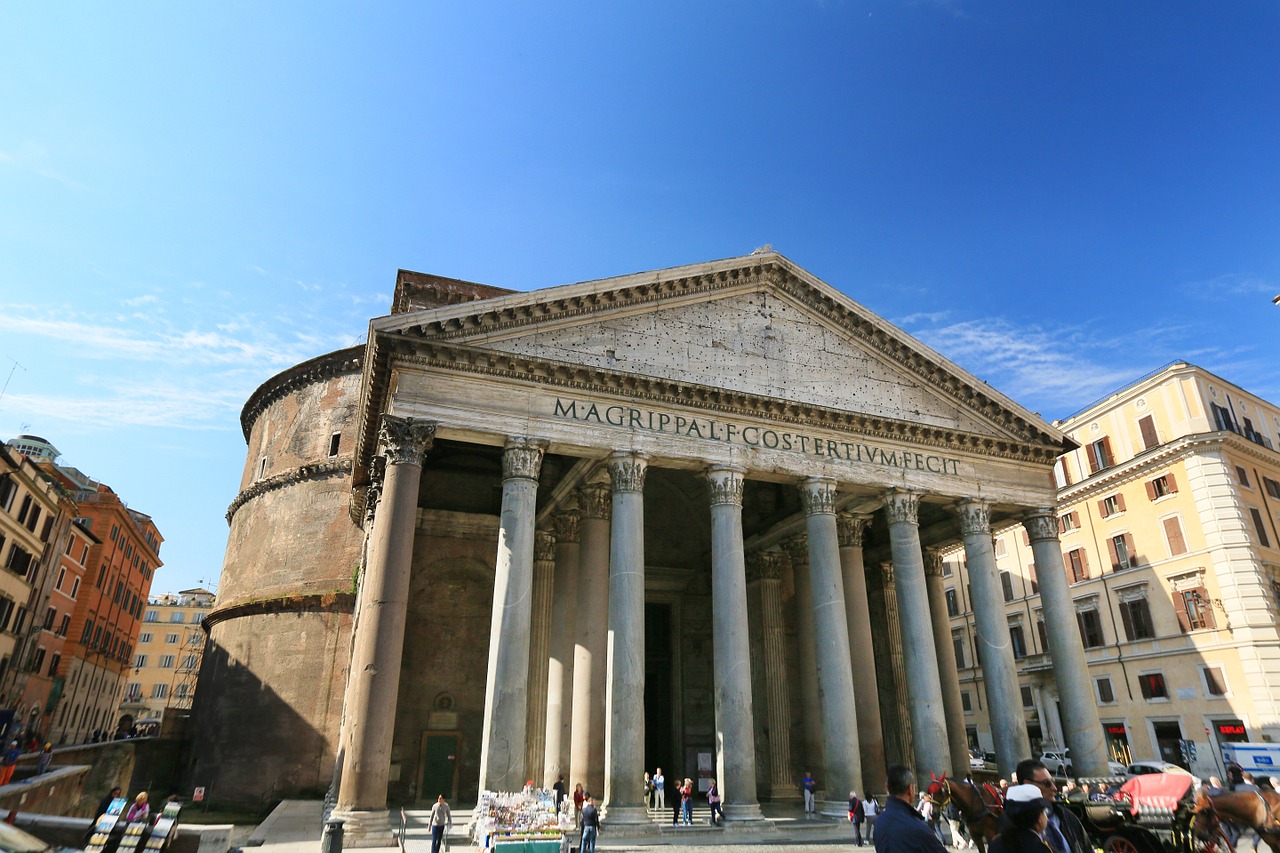 The Spanish Steps are located in the charming Piazza di Spagna and lead up to the Trinità dei Monti church. Today, the steps are in the heart of Rome’s upscale district as it is surrounded by designer boutiques flanking the steps. The steps were built in the 1700s as a means to connect the church and the plaza below; overtime the steps have become a popular meeting place with artists and travelers and remains so today.

One of the more popular piazzas in Rome is the Piazza Navona, which is built on the site of the stadium of Domitian. The main draw of the Piazza Navona are the trio of fountains that can be found there. The largest and most notable is the Fontana dei Quattro Fiumi (Fountain of the Four Rivers). TRAVEL TIP: The Piazza Navona is lined by restaurants but be fair warned, these eateries are tourist traps with mediocre food and over priced menus. Your best bet is to eat anywhere else or, if you want to spend some time at the Piazza Navona, just have a glass of wine.

The Vittoriano (also known as the Monumento Nazionale) is a regal monument built in honor of Victor Emmanuel, the first king of unified Italy. It is virtually impossible to miss the towering Vittoriano with its stunning, white marble facade and waving Italian flags. TRAVEL TIP: Visit the roof of the Vittoriano (free) for an incredible view of Rome. For a few euros, you can take the glass lift for an even higher, panoramic view of the entire city.

The Centro Storico is a neighborhood of Rome that houses the majority of the popular ancient cites including: the Pantheon; Piazza Navona; Santa Maria del Popolo Church; Spanish Steps and of course, the Trevi Fountain. Spend a day just wandering around the Centro Storico, stumbling across these major attractions, eating gelato and falling in love with Rome.

The Vatican is home to two of Rome’s major attractions: St. Peter’s Basilica and the Vatican Museum (home to the Sistine Chapel). The Vatican is the world’s smallest sovereign state and sits just a few feet away from the Tiber River. Book your tickets in advance to skip the long lines at the Vatican! TRAVEL TIP: If headed to the Vatican, make sure to cover up! Modest length skirts should be considered and shoulders are asked to be covered upon entry.

It goes without saying that Rome’s food scene is fantastic. Fresh ingredients, centuries old recipes and meals that–quite frankly–are a symphony of flavors on your palate that can bring tears to your eyes. Everything is simple but nothing is basic in Italy. Pizza is a work of art here, pastas are made fresh and ingredients are natural and untouched. Your best bet for finding places to eat is to ask the locals what they like. Here are just a few ideas to choose from!

Wherever I travel, the first thing I do is look for the daily market. Markets are perfect snapshots of a local culture and culinary scene; they connect you to locals, give you an idea of the food scene and offer authentic, non-touristic tastes of the destination. While in Rome, I visited the Campo de Fiori market–a daily market where vendors sell fresh produce. Right next to the market is the Forno Campo de Fiori, one of the oldest fornos in Rome, that churns fresh-from-the-oven pizza each day.

Near the Largo di Torre Argentina ruins is Emma Pizzeria (the delicious pizza photo shown above). I was recommended Emma Pizzeria by two local ex-pats who swore by the pizza. The meal did not disappoint! The pizza came with San Marzano tomatoes, globs of creamy burrata cheese, fresh basil, olive oil and perfect, thin crust.

The neighborhood of Trastevere in Rome is said to be one of the best for food. If looking for authentic Roman bites, simply take a stroll through Trastevere and watch as each turn reveals vine-draped trattoria after trattoria. One of the best known places to eat in Trastevere is Da Enzo, a hole-in-the-wall eatery that serves classic Roman dishes such as fried artichokes and cacio e pepe (homemade pasta with grated cheese and a sprinkling of pepper). What makes Da Enzo very endearing is how no-frills it is. When you arrive, you simply grab a table–perhaps even share one with other diners–and lean back with some wine and classic dishes. 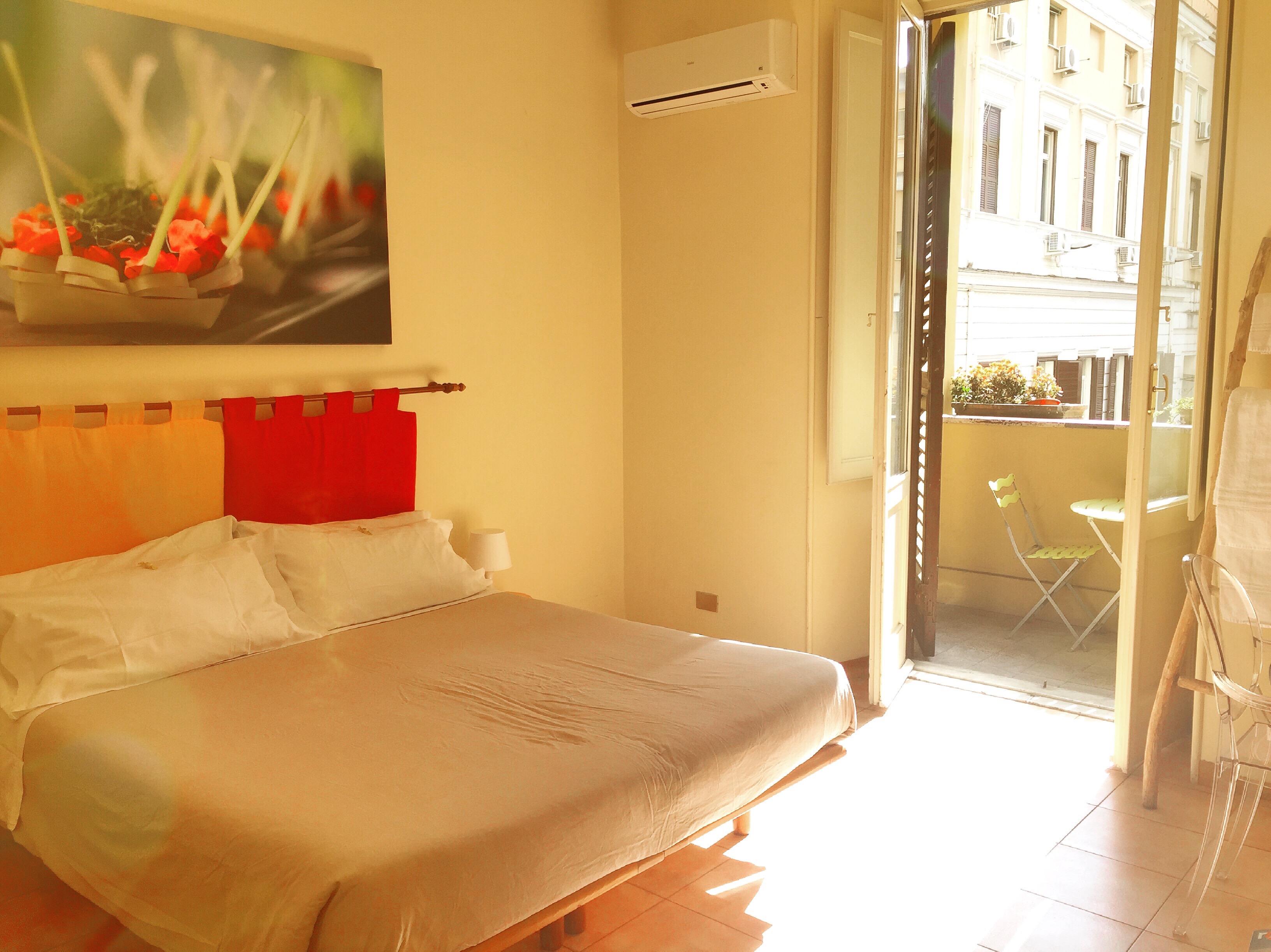 The St. Regis Rome is a 5 star hotel that averages more than 600 euro per night. The hotel is just a 14 minute walk from the Trevi Fountain and is within a baroque palace, offering up a lavish stay. Plush, antiques-filled rooms have marble bathrooms and frescoed walls and come with free Wi-Fi and cable TV. In addition to the remarkable on-site dining, the St. Regis Rome offers chauffeur services for free! Talk about living like a Roman Emperor.

Capo d’ Africa is a beautiful boutique hotel located just a short walk from the Colosseum. The average price per night ranges from 250 euro+ and offers a four-star hotel stay with a coveted rooftop view of Rome, a delicious breakfast, cozy beds and balconies that overlook the charming street below. The Capo d’ Africa is ideal for its location near some of Rome’s main attractions.

The Beehive Hotel & Hostel is just a 5 minute walk away from the Roma Termini Station and is founded by a friendly ex-pat couple who left their Los Angeles apartment to move to Italy and open The Beehive. The Beehive is a cheery, bright place that offers hostel dorm rooms starting at $47 USD/night or private, and hotel rooms starting at $100 USD/ night with the option for a private or shared bathroom. One of the main draws of The Beehive is the on-site cafe that serves up organic vegetarian/vegan breakfasts and dinners throughout the week, as well as wine and beer available for purchase. While many hotels today seem to be manufactured and devoid of personality, The Beehive has an identity and seems to perfectly reflect the couple who found it.

Have you been to Rome? Share your favorite Roma tips below and make sure to check out our other EUROPE GUIDES.