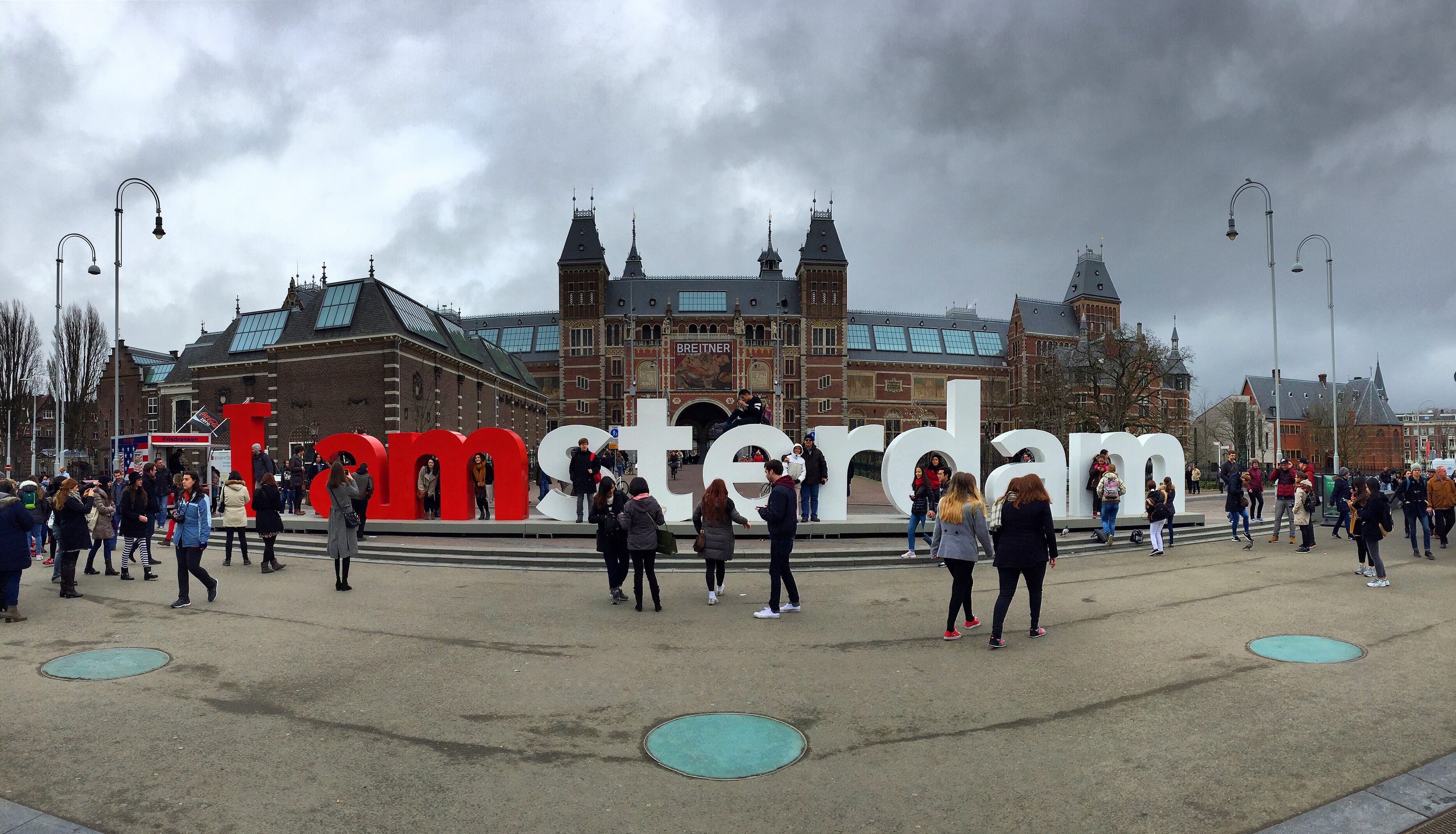 The ferry pulls up in front of the Amsterdam Central Station and the bikes, motorcycles and cars around me start to rev their engines and push their pedals. There isn’t a moment to hesitate as my boyfriend, Jeff, and I are suddenly wrapped up into the Amsterdam crowd of bicycles disembarking from the ferry and scattering into the city like dust in the wind. Helmets seem to be obsolete in this city as I wobble off the ferry on my light blue bicycle and follow the crowd towards the heart of Amsterdam. As I keep pace with the Dutch, it feels as if I’m riding in the Tour de France–turn left, turn right–and soon we’re biking along dreamy canals and colorful Dutch homes.

Amsterdam opens itself up to us like a warm embrace–instantly disarming and charming–it has the feel of a fairy tale with its quaint homes, horse drawn carriages, canals, house boats and delicious smells. It’s just the first day but already we are in love with this city–instantly and whole-heartedly; the same unconditional love that hit me when I first walked down the streets of Paris. Amsterdam is an incredible city to visit; a place where beauty, pleasure and open mindedness reign supreme. If headed to Amsterdam for the first time, consider this your quick guide!

What to See During Your Visit 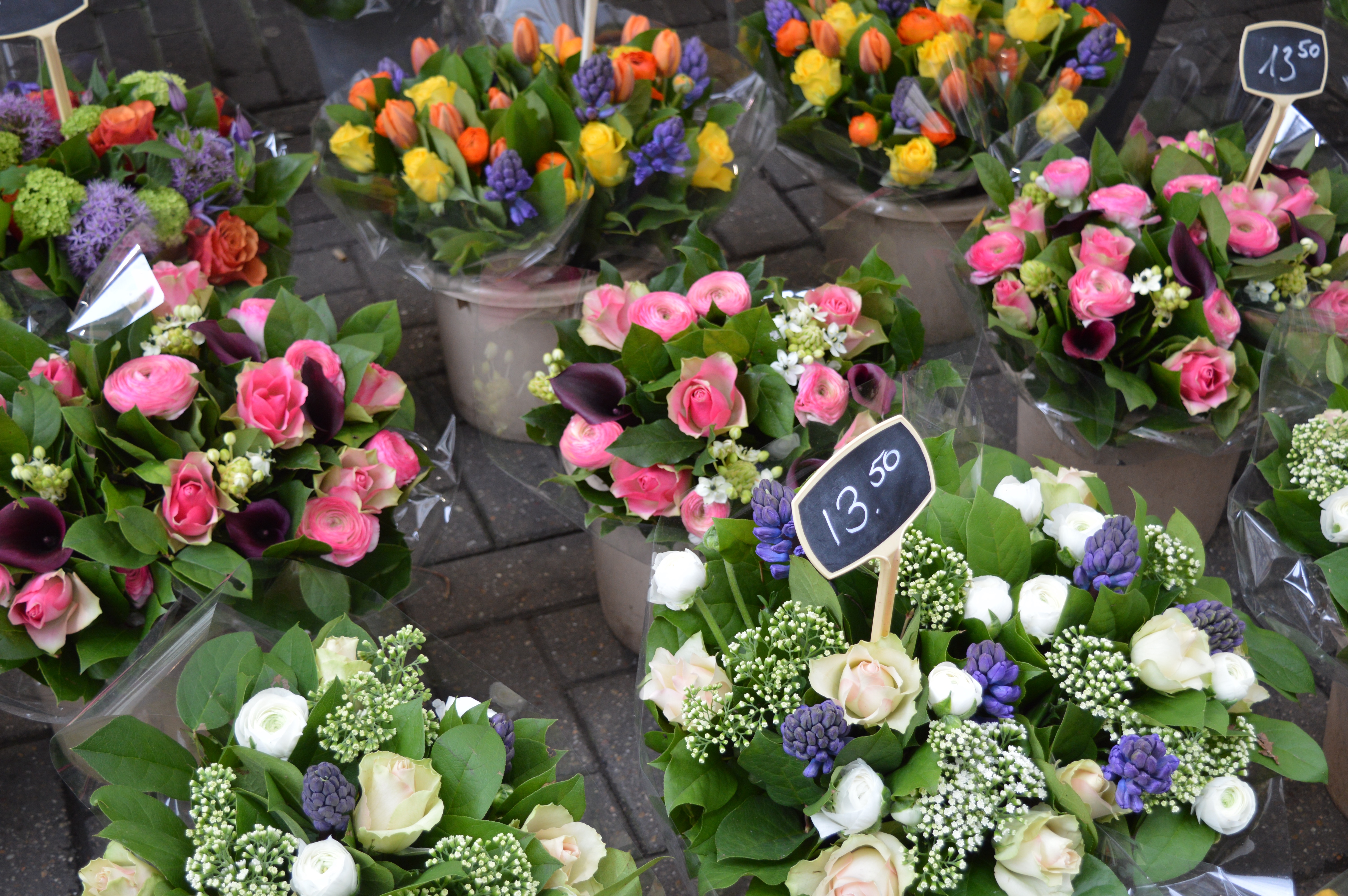 Anne Frank is one of the most famous former residents of Amsterdam who is known worldwide for her tragic story and endearing diary entries. During World War II, Anne Frank and her family were in hiding in the attic of a canal-facing home in Amsterdam before they were ultimately betrayed and found in 1944 and sent to various concentration camps. Today, the Anne Frank House (Prisengracht 267) is a museum that holds her original diary and the belongings of her family. TRAVEL TIP: Book an online ticket in advance to skip the long lines!

Considered one of the most popular museums in the world, the Van Gogh museum holds the largest collection of Van Gogh’s work–including over 200 paintings, 500 drawings and 700 personal letters. TRAVEL TIP: A visit to the Van Gogh museum is FREE with an I Amsterdam city card and book tickets online to skip the line!

Known locally as the Bloemenmarkt, this flower market is the world’s only floating flower market. The market is along the canal on Singel Street and is full of colorful tulips, flowers and more.

Vondelpark is a fantastic park that includes an open air theater, cafes, trails, bike paths and a rose garden with more than 70 types of roses. While in Amsterdam, Jeff and I biked the length of the park and were surprised to find that in the trees there were a family of brilliant green-blue parrots living! Keep an eye out for them when biking! 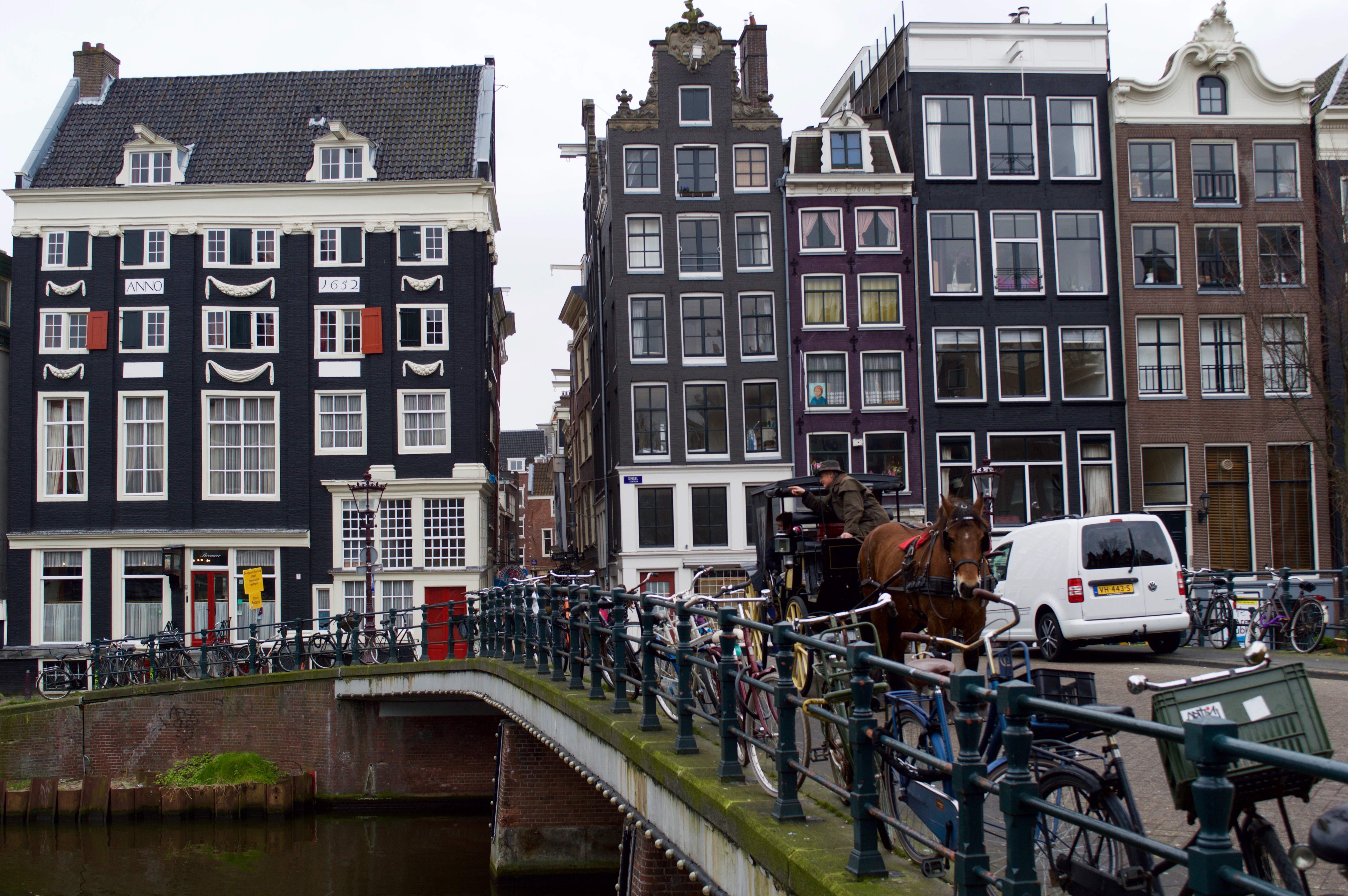 The Jordaan neighborhood is considered the most beautiful neighborhood in Amsterdam and even the Netherlands because of its classic Dutch style homes and charm. The best way to explore is by simply walking around, snapping photos and discovering the little cafes and shops along its streets.

9 Streets is often compared to London’s Oxford Street for its charm, quirkiness and shopping. The 9 Streets are…well, 9 cobblestone streets that connect the main canals and are lined with cafes, restaurants and shops.

What to Do in Amsterdam 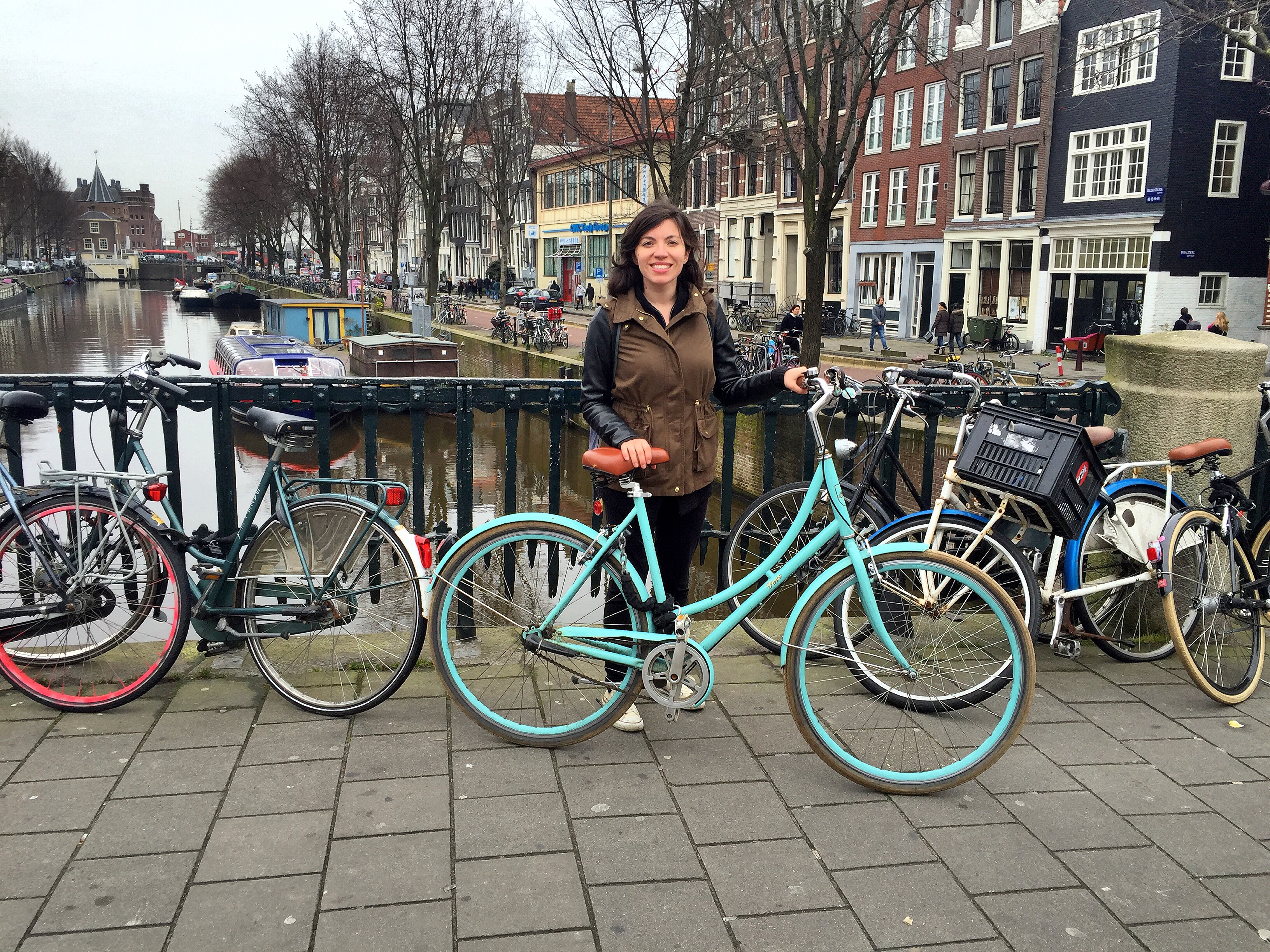 The first thing you’ll notice when arriving in Amsterdam is how everyone is on a bicycle. Young people, older people, couples, parents and kids–everyone seems to be biking around the city. When I got to Amsterdam I had expected biking the same way I know New York offers Citi Bikes but Amsterdam’s biking is not an afterthought or transportation option, it is the main transportation option it seems. As soon as we arrived in Amsterdam, we rented a bike and just explored aimlessly, letting the city unfold before us.

Much like the canal cruises that glide down the Seine in Paris, Amsterdam offers hop-on/hop-off canal cruises and 1-hour canal tours that take you around the entire city. For travelers for whom biking is not preferred or possible, canal cruises are a good option.

Stop in at the coffee shops

In Amsterdam you can legally purchase and smoke marijuana in their coffee shops. There are various stores that sell marijuana seeds, pipes and other hemp-related items but the only places that legally sell the drug are coffee shops. The coffee shops are easy enough to spot (ahem…smell) and have the appearance of a dive bar where guests simply hang out, smoke and drink. You may also go in and purchase marijuana to-go if you prefer to not stay in the coffee shop. One of the most popular (and first) coffee shops in the city is The Bulldog. TRAVEL TIP: While marijuana is legal and openly accepted in Amsterdam, it is unwise to take it to any other neighboring countries if you have plans to travel around Europe (including by train). Do so at your own risk.

How to Save on Money 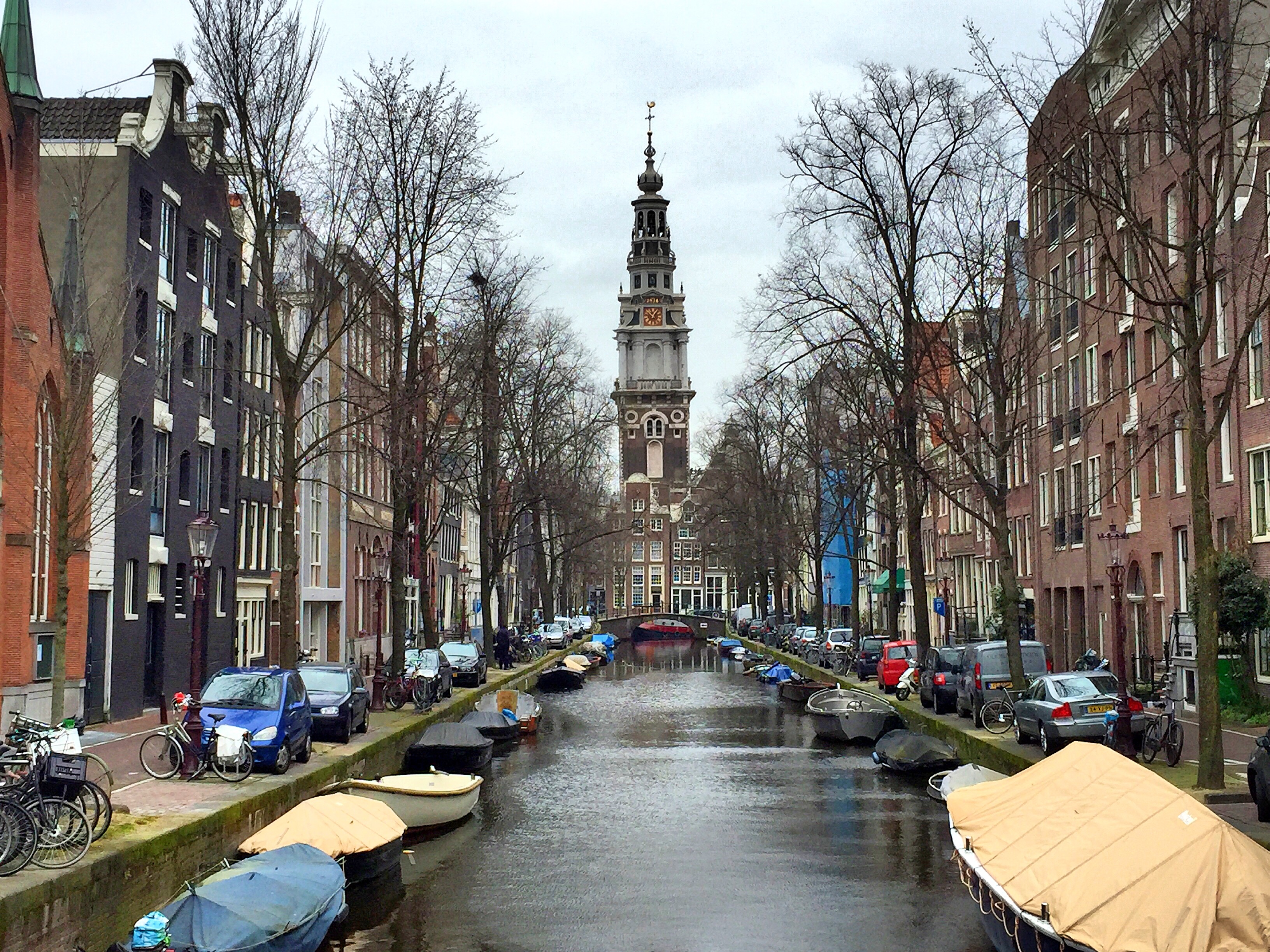 Eat at Wok to Walk

When Jeff and I arrived to Amsterdam, it was the 4th city and 2nd country on our European adventure. Money was starting to become tight and maintaining a travel budget became paramount. On our first day in Amsterdam we biked around the city in search of a meal and landed on Wok to Walk–a chain, Asian restaurant that is apparently very popular in the city. Any location of Wok to Walk seemed to be bursting with Dutch-speaking locals who lined up outside the door for noodles. Of course, while in Amsterdam we made sure to eat our fill of Dutch specialties but to save a few dollars on lunch or dinner, consider Wok to Walk.

Airbnb is always a great way to save on travel as you can often snag an apartment at a cheaper rate than a hotel. Bonus: you get to “live like a local” during your stay!

The I Amsterdam Card is available in 24 hour, 48 hour ad 72 hour passes and offers city-wide discounts including free museum entry and unlimited use of the public transportation system. 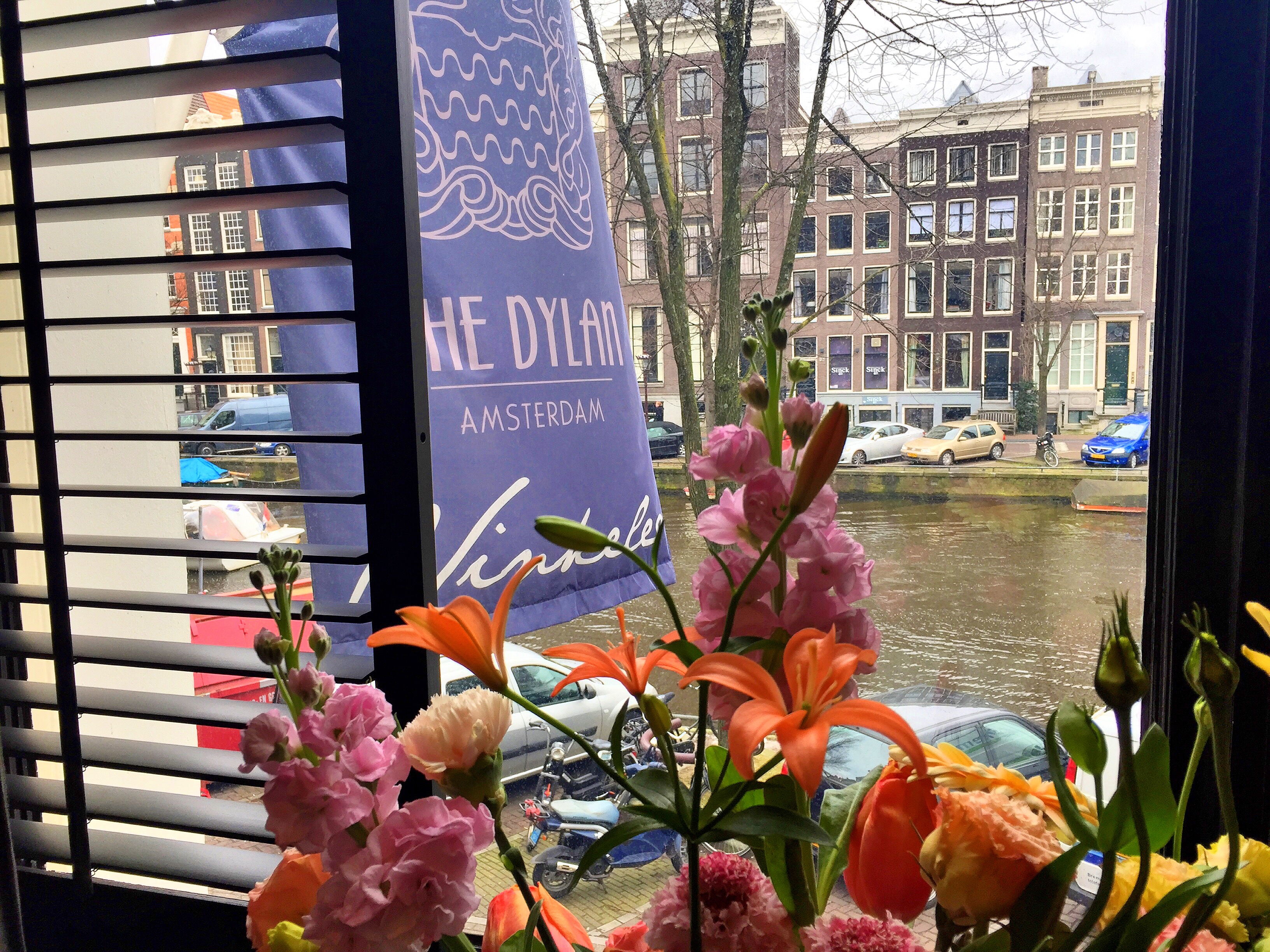 The Dylan is the type of hotel one dreams of staying at when traveling abroad. Elegant, decadent, classy, comfortable and ideally located; the hotel is charming and offers excellent service, Michelin-starred dining and unique accommodations. Check out the full review of The Dylan here.

Have you been to Amsterdam before? Share your best travel tips and recommendations below!