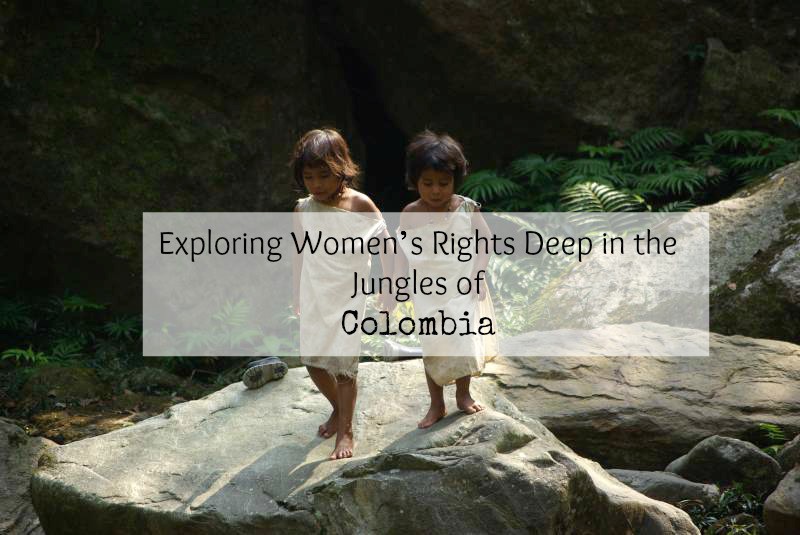 “Close your eyes and open your mouth,” commanded our guide Camacho, singling me out to blindly receive the mystery treat. We were three days deep and almost four miles high on the Sierra Nevada de Santa Marta in Colombia. Camacho put the coca leaves in my mouth and told me to chew; they tasted like bitter mint. Camacho, retrieved his “poporo” and demonstrated the mystic rituals of the Kogi peoples: “Dip the stick into the calcio, ashes of burned seashell, stored in the poporo, a dried gourd. Stir the calcio into the chewed coca leaves.”

The coca leaves and calcio from the poporo are a sacred right of passage for Kogi men and used for prayer to “Pachamama” or Mother Earth. The calcio and coca leaves burn incessantly for the men as they come of age and participate in the sacred ritual for the first time, grinding down their gums and blackening their mouths. It’s a hallucinogen, especially when paired with fasting. The Kogi men don’t eat for days, praying to Pachamama and grinding their gourd with the sticks. At breakfast the next morning over papaya, eggs, and black beans prepared at a campamiento by Camacho’s family, a 20-something Frenchman asked, “Do women participate in these rituals?”

The Kogi women: Gatekeepers on the fringes of the Promised Land 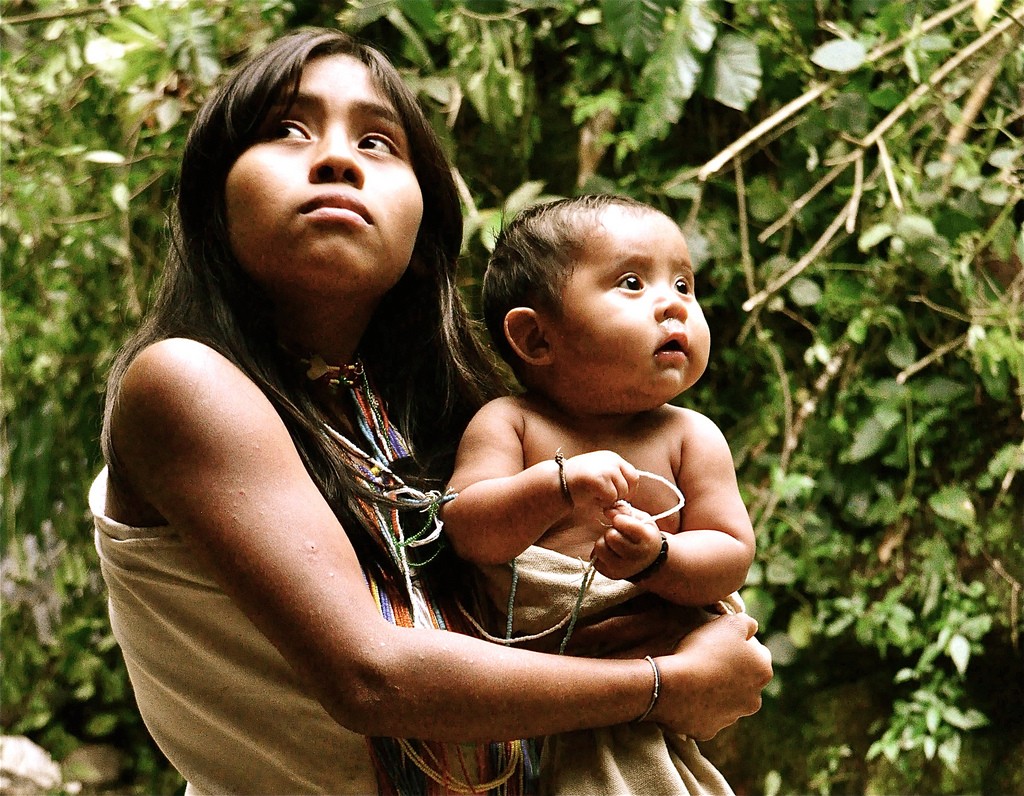 “Women will take no part,” Camacho laughed. “Women are married at puberty, around age 12, and kept as a wife as long as they can have children. When a woman is past her child bearing years, the man will get himself a new wife while the woman is relegated to “grandmother status.” Suffice it to say, the modern woman is nowhere to be found in these jungles where women of “grandmother status” are relegated to household chores and child rearing. The average lifespan for a man is remarkably high, around 80 years, while a Koji woman life expectancy is capped at 40 years old; almost half the life expectancy!

Camacho explained, “The homebound female incurs lung infection from smoke used to cook, heat, and keep mosquitoes away while the men are out revering Pachamama with coca leaves, calcio, and moonshine liquor.” These women can’t set foot in Pachamama’s worship temple, they could not take civilization, the poporo, in their hands. The Kogi women could not join the men as they prayed and danced together; they simply are meant to be at the receiving end of sacred wisdom. The Kogi women: Gatekeepers on the fringes of the Promised Land.

A Look at the Kogi People & Culture 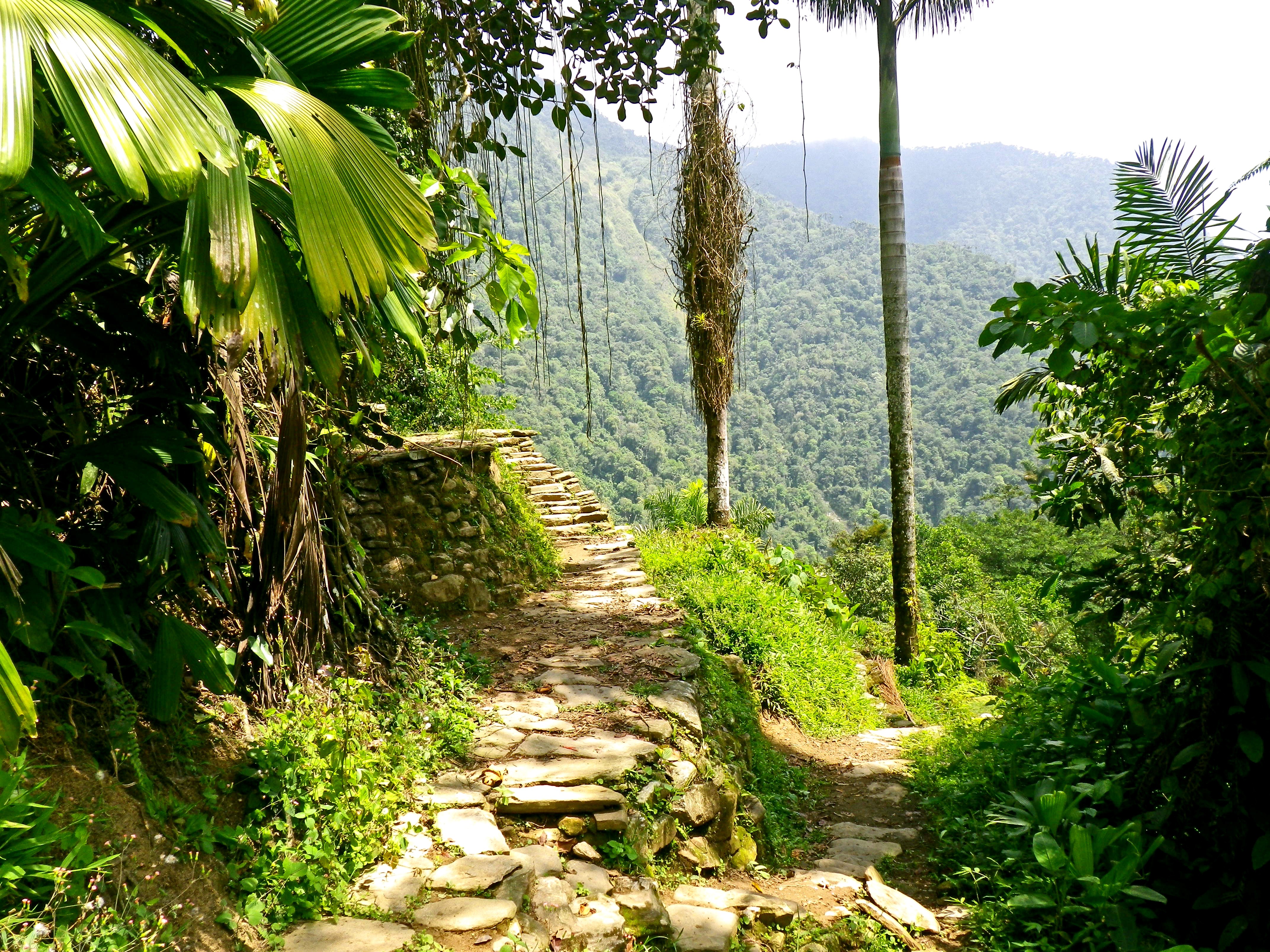 The Kogi people are a tribe flourishing in Northern Colombia for over thousands of years, resisting Spanish conquest, maintaining their native culture and living as if untouched by time deep in the jungle of the Sierra Nevada de Santa Marta. They educate without written word and they function without the wheel. Kogis reside in circular huts—each perfect sphere paying homage to Saranqua the sun god—made of stone, mud, and hatched with palm leaves. These same huts have existed over countless generations, just rehatched every two years.

The central hut, “the house of the world,” is accessible only to men. There the sacred is explored, politics are discussed, and village decisions are made. Kogis claim memory of the beginning of time and detail the rampage of Spanish conquest in their region in the 1400’s. I wonder if the Kogi Indians have even heard of Colombia’s “La Violencia” deep in beautiful peaks, cascades, and tiers of Jurassic-sized leafs and vibrant green brush. But of course they have, as Camacho carried his machete for our protection.

En Route to the Lost City 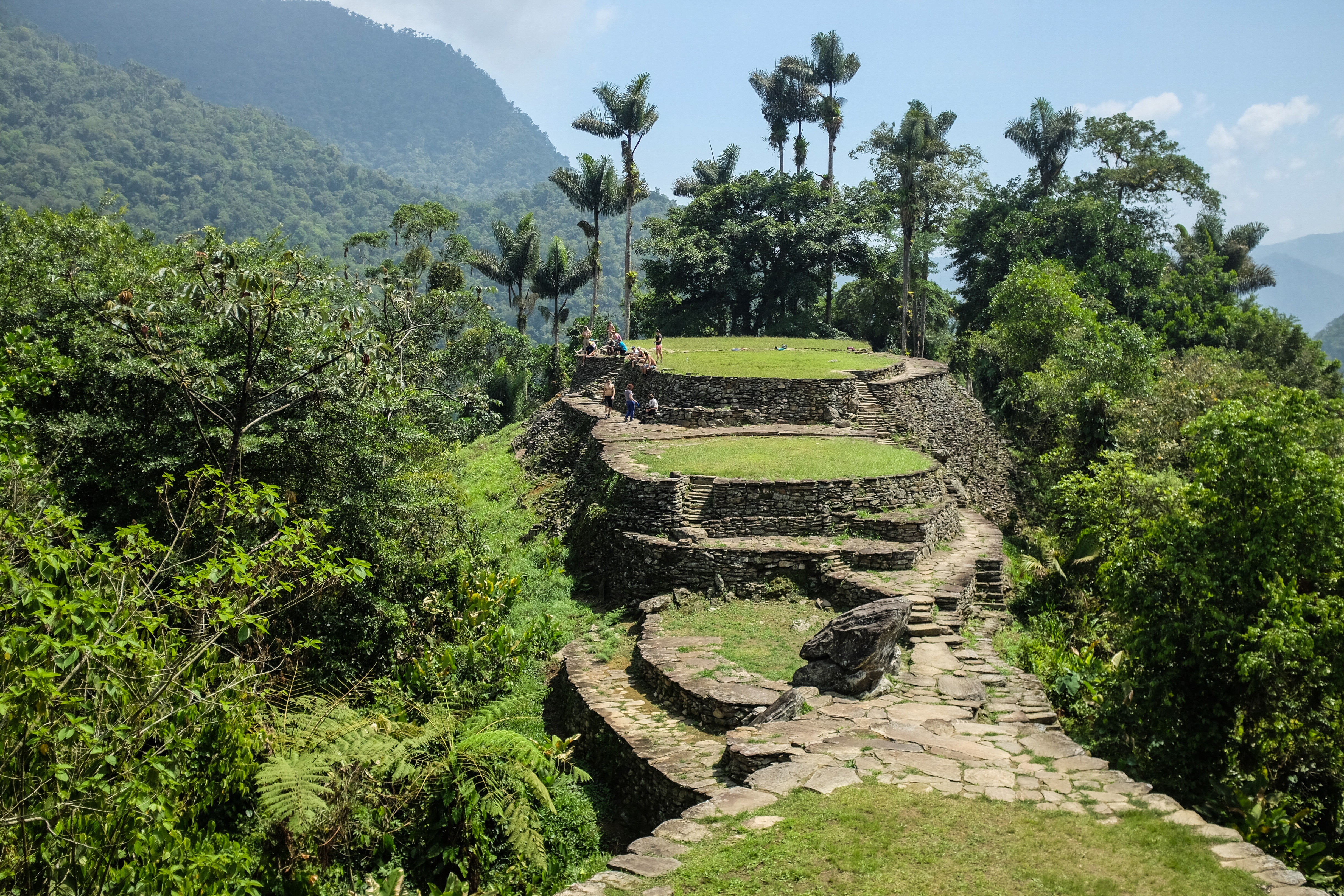 We, a group of 20-something hikers, were en route to the Lost City, la Cuidad Perdida: pre-Incan ruins older than Machu Picchu, undiscovered until 1974 by land pirates in search of gold. The Kogi Indians use these sacred grounds of their Tairona Indian ancestors for an annual convention of worship and dance, gathering Kogis from near and far.

Our 30-mile trek brought us to 1,200 crumbling stone stairs, built in 400 A.D., leading up to 32 acres of brilliant green moss-shrouded stone city, divine ordination evident in each ruin. Perfect elevated spheres tiered downward to the river. We marveled at the raw design and architectural prowess of the ancient peoples. I imagined, enviously, the Koji men meeting, dancing, and praying with their poporos. Each dark solemn face deeply concentrated in worship. The Kogi’s white, stiff canvas clothing stained in light browns over sun-caramelized skin rhythmically swaying back and forth with their brittle, greasy black hair. Kogis have an unparalleled reverence for all things nature. Pachamama is not some distant god, she is “the mind inside nature.”

If I wasn’t, as a woman, predicted to die in the next 5 years like the average Kogi woman lifespan foretold: I could do this “off-the-grid jungle living” forever. A ripened mango fell from the infinite echelons of green leaves to the path by my feet. The mango’s juicy sweetness quenched my thirst as I stripped my boots off and dipped in icy, trailside cascades to enjoy the Sierra Nevada mango properly. Thanks, Pachamama. Thank you for the gifts of the mango, avocado, and banana trees, for bathing in the freshwater streams. I yearned for simplicity, spirituality, the connection with the earth, and a simple dirtied white canvas tied around our bodies with a life of barefoot exploration through the jungle–just without the impending doom.

A Modern Woman in an Old World 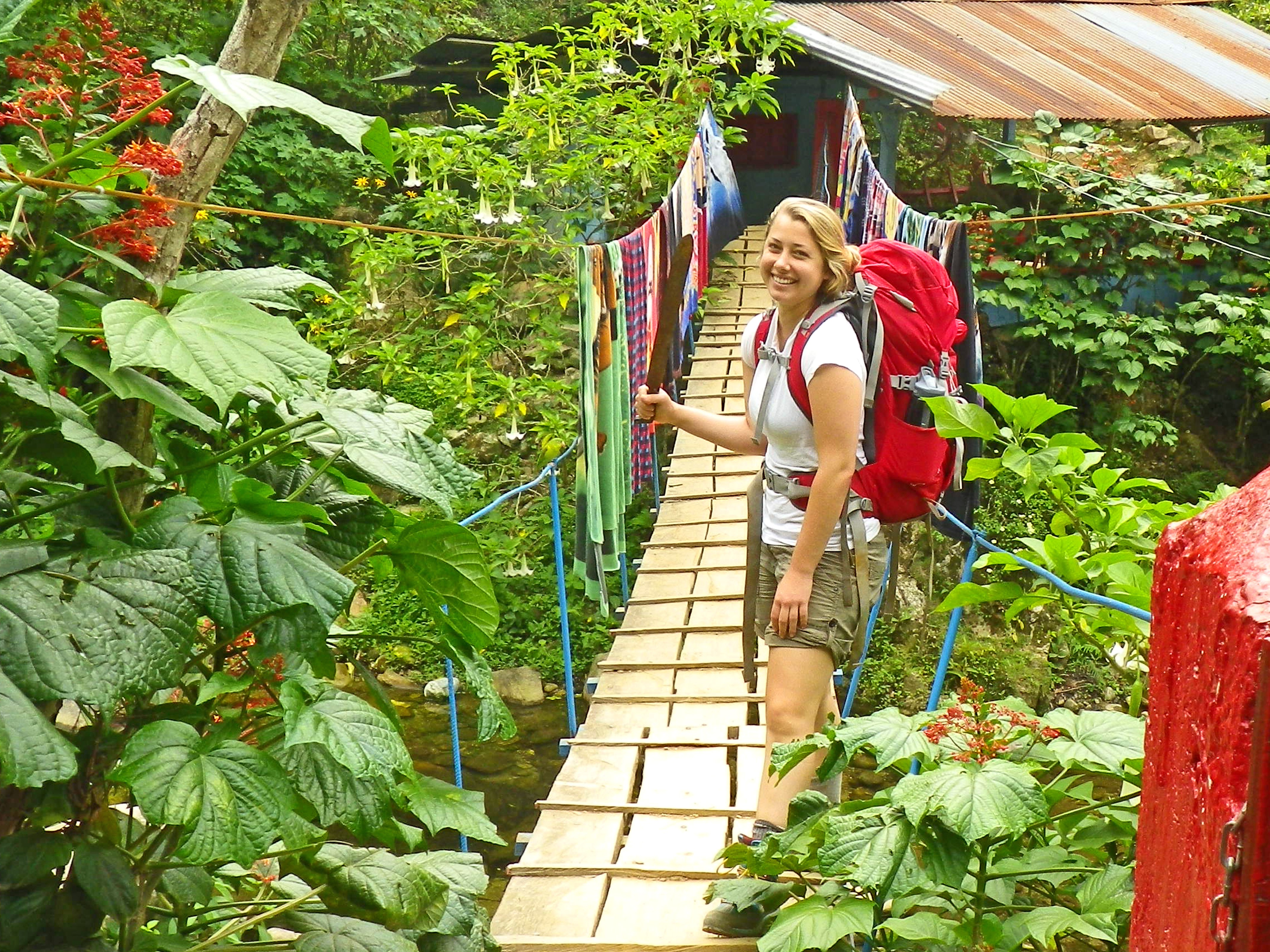 We passed the Kogi peoples along the trails over our five days of trekking, untouched by time, solemnly wandering the trails, barefoot, carrying their children and poporos. As I stumbled for words to articulate the injustice to the male French hiker by my side on mile 7 for the day, he interjected with a condescending sigh. The “Frenchie”, as we called him,  explained: “The Kogi women are probably thrilled to start her period, get a husband, and start a family. It’s how she’ll worship Pachamama, it’s how the generations before her in these very lands also worshipped Pachamama. She is given a sense of belonging. She is part of something, so grand, so beautiful, that it would almost be irreverent for you to want to ‘rescue her.’ We have no tradition, no sense of belonging—that’s why people are lost.”

He continued after a few minutes of my silent contemplation, “They’ll soon be married and firmly aware of their purpose in life, to know why they exist. She’ll belong to a community, she’ll be known and she’ll live out the rich traditions of her culture for thousands of years, connected to Mother earth.”

In modern culture we have short-term fulfillment. Hardly any tradition left. We’re lost and hiking to a Lost City, thousands of miles from our own homes and communities in one of the most dangerous countries in the world. I saw the Kogi women filling their roles, the roles their ancestors had before them, from my shallow, entitled perspective. But I was overwhelmed by the gross disparity of injustice in this remote community: I wouldn’t lose this battle—half the life span of a man? Excluded from spiritual exploration and sacred teachings?!

“But you’re a man,” I reminded the Frenchie. “You’ll learn and expand your mind, walking among the jungle with an infinite horizon, free to invest in the world…contemplating all of it—the physical, the spiritual…while the women’s path is paved. Paved, short, and limited.”

“Exactly! The woman’s path is paved: She knows her purpose,” Frenchie argued. “And who are we to judge the quality over quantity? And what is remarkably different among the Kogis from our cultures? They, too, have the politics, corruption, and betrayal. People are people.” I didn’t respond. 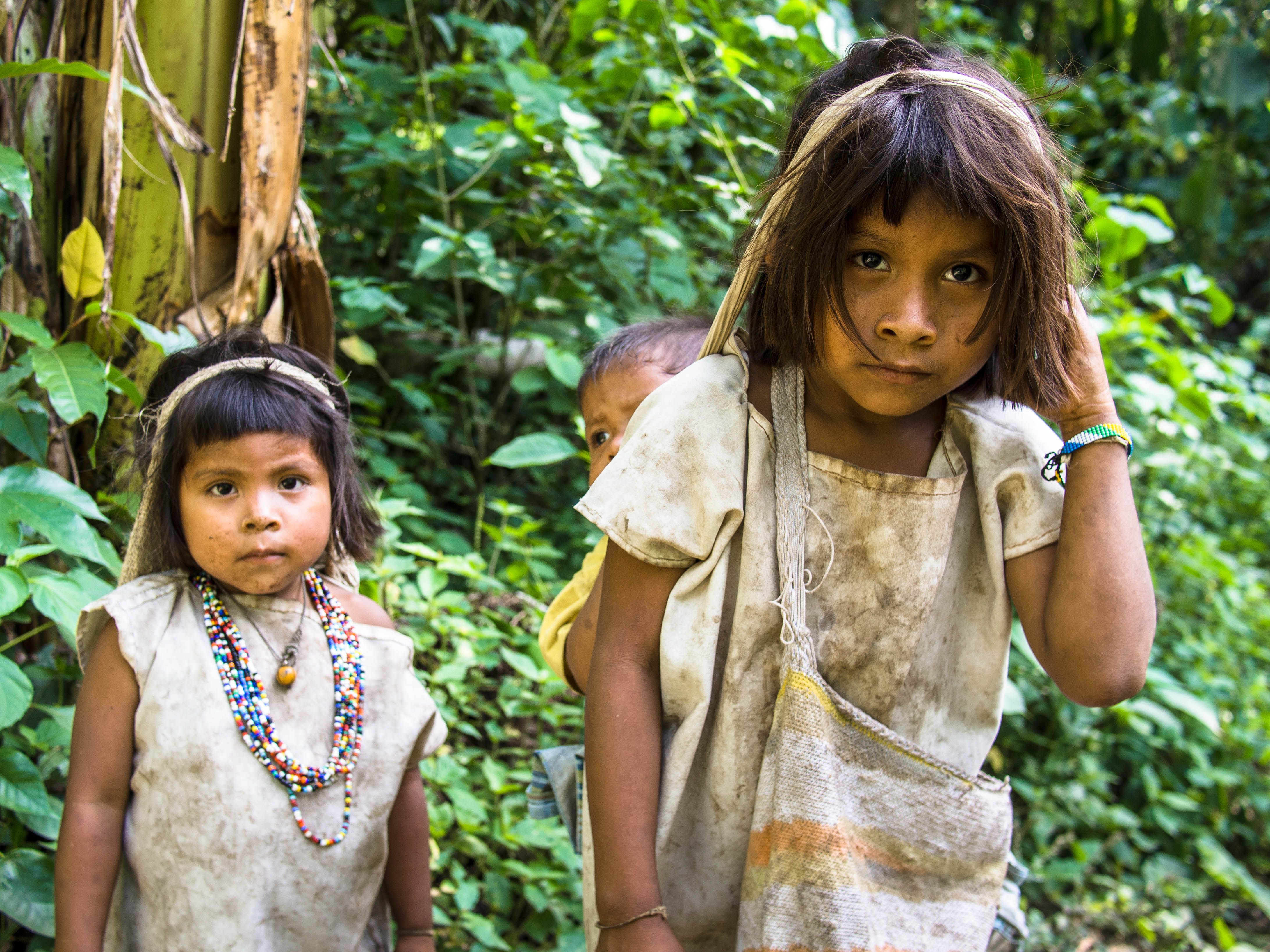 A few miles into the hike I saw two young Kogi girls huddled in the shade of a palm. Their large black eyes stared at us strangers, studying our massive packs and neon dry-fit shirts. Their dark tousled hair, stained white dresses, colorful woven satchels, and rich dark skin emanated natural beauty beside their straw huts and the Sierra Nevada Mountain backdrop. One of the girls approached me as we slowed and she pointed from her face to mine, our gazes connecting in mutual curiosity. I broke, imagining her time-marked future of obedience and labor—a grim fate for a young girl with her whole life ahead of her. Submission and sacrifice. Are guiding values, purpose, and profound spiritual satisfaction worth the intellectual limitations, the submission, the sacrifice, and the boundaries?

We finished the hike and said our farewells. I would fly home to my developed world, to the best country and time to be a woman our history has seen thus far with–though imperfect–doors open to my every passion. And back there in the jungle, the Kogi women would reverently submit.

Both the Kogi women and I would ultimately seek moments of joy, worth, success, satisfaction and a deeper understanding of the world around us. But I would, God willing, live beyond 40. I will maybe be the only wife my husband will ever have, unconcerned with losing my position with age. I would pursue my passions while the little Kogi girl who pointed to her face and then mine, would sustain her family, reproduce, serve, and then die at the young age of 40.

But, you see, the Kogi girl’s days would be a reverent adventure with the physical and spiritual depth of the vibrant tiers of flora, cascading falls, and infinite peak vistas, and I would merely continue my sporadic escapes from my cubicle on weekends and holidays. Tradition or progress?