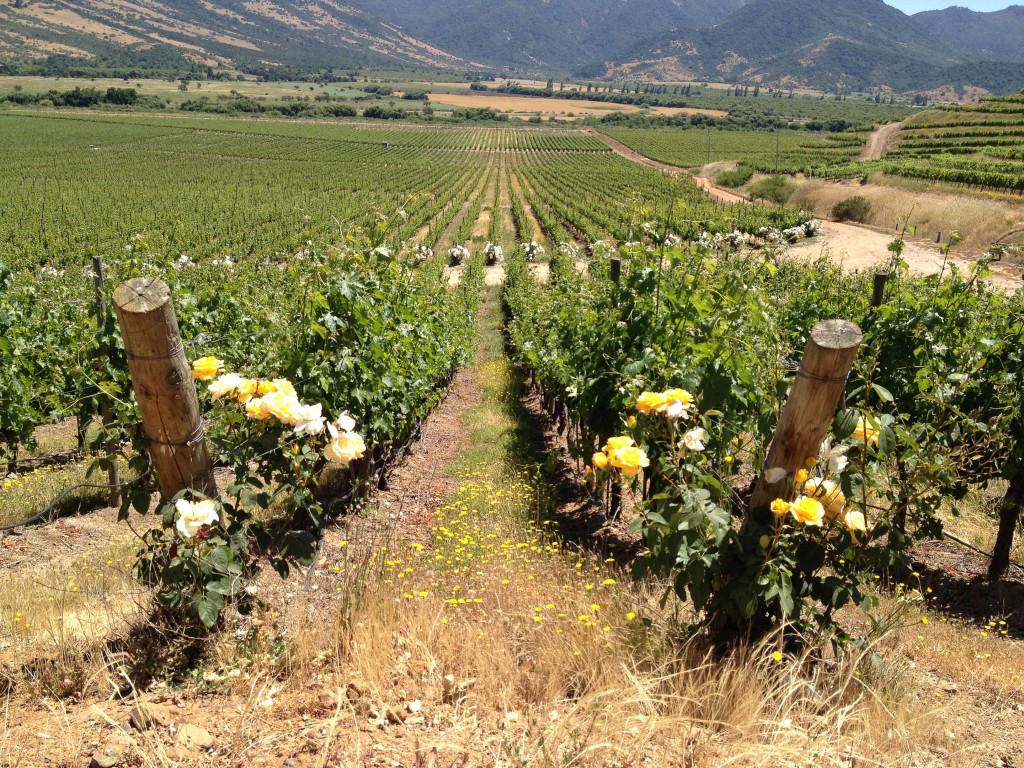 A few months ago, I found myself in the midst of a unique opportunity while location scouting in Chile. It began on the plane trip from Miami to Santiago, where I struck up a conversation with a nice gentleman that was sitting near me. Of course, we exchanged the typical travel small talk – What do you do? What brings you to Chile? Where are you from? This of course brought me to the topic of being a freelance travel journalist, entertainment industry producer and travel show host from Miami. The man was intrigued by my broad spectrum of careers and subsequently offered me some eye-opening suggestions on places and things to do in his rich and vast country of Chile.

As he politely began to describe a hidden gem called Santa Cruz, I took his valuable knowledge to paper, so that I too could find this magical place. Santa Cruz, he said, is located in the wine region about two hours south of Santiago. Being that I had not figured out this part of my trip and that Chile is known worldwide for having some of the best wines, I decided that Santa Cruz sounded like a perfect pin-drop for my adventure. To top it off, the gentleman kindly offered to put me in contact with a friend who might be interested in organizing a sponsored trip for a travelling journalist like myself. With the thought of an amazing new location swirling in my head, I gladly took the man’s business card and told him that I would stay in touch.

A few days later, I reached out to the gentleman via email and he quickly responded with more information on the wine region of the Coachella Valley and of course his friend’s name and contact information, Carlos Cardoen.  Before I made contact, I wanted to see if I could find some information about Carlos Cardoen so I googled him. Immediately, I was blasted by stark headlines of articles from various publications that included in their titles “Arms Dealer,” “Sale of Bombs to Iraq,” “ Wanted by Interpol,” and “Indicted by the US.” There were even pictures of him shaking hands with the infamous Saddam Hussein. Further research uncovered that Mr. Cardoen designed and invented the cluster bomb.  Talk about your mind being blown, no pun intended. 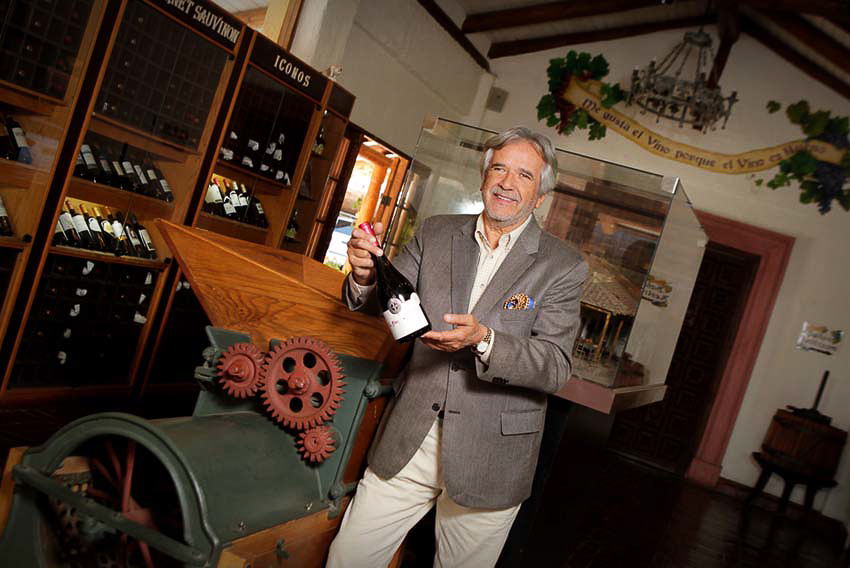 As a traveler, I have this innate sense of adventure but how could I visit a place or potentially meet a man that created weapons. Imagine if all of a sudden you found out that Disney World was built with drug money, would that taint your childhood experience? It has been years since his involvement in the sale and design of weapons.  I honestly was not sure if I should contact him after absorbing all this information about his past. On top of that, I am an Iranian-American and these weapons that Mr. Cardoen designed and sold to Saddam Hussein, were most likely used during the eight-year Iran-Iraq war in the 1980’s.

My curiosity got the best of me; I could not resist reaching out to him as I had to find out more. I quickly logged into Skype and dialed the number.  What I did not expect was such an accommodating and gentle voice on the other end.  He was actually really excited to hear from me.   This man so far did not seem like someone who was wanted by Interpol or could have manufactured a firecracker, let alone the cluster bomb.  As we began to speak more about all he has created in his hometown of Santa Cruz, he offered to sponsor a trip to visit his hotel and the region for a few days.  I paused for a bit before I replied, as I had to take some time to process all this.  My curiosity got the best of me, so I accepted the invitation.  Unfortunately, he did express regret that he would not be in Santa Cruz during my stay, as he will be at his other home on the island of Chiloe, meeting with Oscar Wilde’s grandson, whose presence I cannot compete with.  So I thanked him and hopped on a bus to Santa Cruz.  During this three-hour bus ride, I constantly wavered back and forth.  Why would I travel to a place that most likely was built on money earned from causing so much death in the world? Then I started to rationalize.  If it were not his weapons it probably would be someone else’s, right? And, he was not the one pulling the trigger?

As I pulled up to the Hotel Santa Cruz Plaza, I was immediately taken aback by the Spanish, almost Colonial-style exterior of the hotel.  The interior décor was also just as remarkable. It was a flood of visual representations of Chile’s culture and traditions, rendered delicately into every piece of furniture, painting, architecture and artwork. This same attention to detail was also infused throughout the hotel and its rich amenities such as a fully equipped spa, a welcoming pool amidst lush gardens, an outside bar under a traditional Rapa Nui hut and a Las Vegas style casino. Something I had never seen in all of my travels was a museum on the same grounds of a hotel. From ancient arts and crafts, dinosaur fossils, printing presses, and 19th century rail equipment, to my absolute favorite— a lifesize replica and exhibit dedicated to the thirty-three Chilean miners— the Colchagua Museum had it all. I spent hours upon hours marveling at all the exhibits.  Mr. Cardoen, had put so much detail in every nook and cranny in making a complete tribute to his country of Chile. 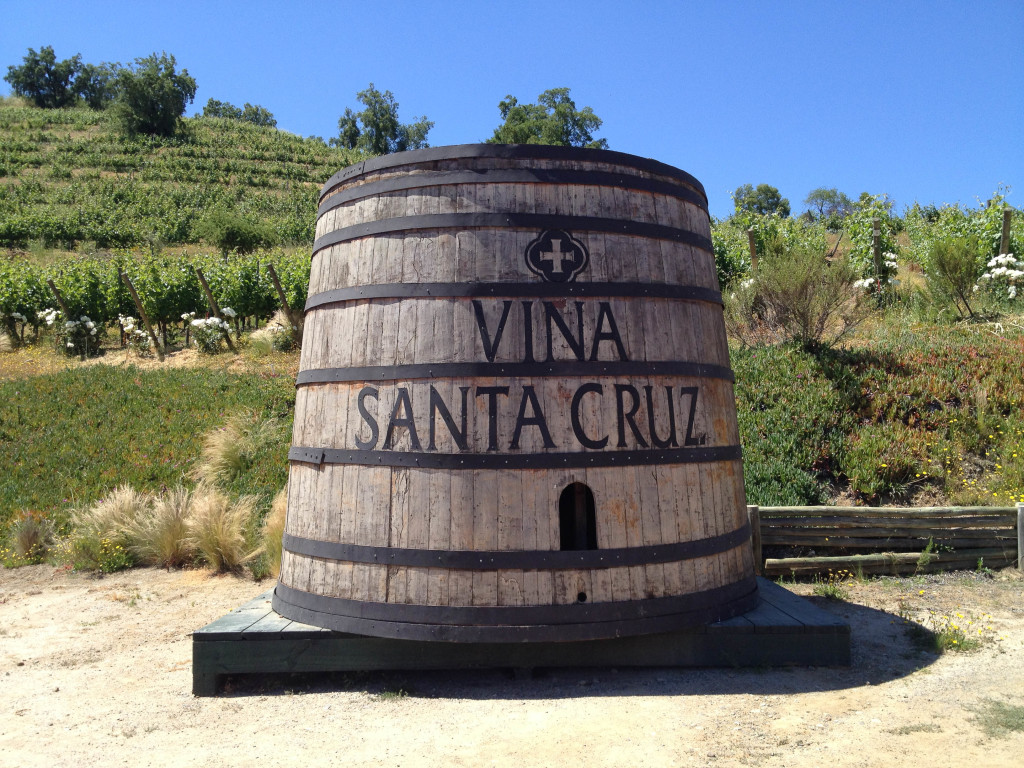 A twenty-minute pleasant drive from the hotel, in the heart of the charming Lolol valley, is where I found Mr. Cardoen’s winery.  Nestled at the bottom of the entrance houses over 50 vintage cars from the 1890’s through the 1980’s, depicting the automotive engineering evolution. On display included a fully functional Ford Model T with a hand crank, a sexy speedy Ferrari 512, the luxury GT Porsche 928, a Chilean classic Citronetas and an actual DeLoeran, equipped with the “Flux Capacitor” that was used in the Back to the Future movies.  How cool is that for all you movie fanatics?

Now on to wine! Vina Santa Cruz produces aromatic cabernets, citrusy sauvignon blancs, and a smooth rosé-Naturally, I tried them all. A cable car elevated me to the top of one of the many hills in the valley, to take in the awe-inspiring and picturesque views of the winery and the surrounding rolling hills.  Also atop the hill, I was able to tour replicas of the dwellings that inhabited the indigenous Chilean nations of theMapuche, Aymara, and Rapa Nui. Finally, Mr. Cardoen asked me to accompany the restaurant and grounds manager for a traditional Chilean meal back at one of the several restaurants at the hotel. Until this point, I would have to say, that my stomach had not been satisfied with the Chilean cuisine.  I was recommended before arriving to Chile to try a staple Chilean Creole Cuisine dish, called Pastel de Choclo. It can be more simply described as the Chilean version of shepherd’s pie, which is comprised of many delectable layers.  The first layer encompasses the grinding up of a beef and onion filling that is perfectly sandwiched between a corn mixture.  The next layer integrates slices of chicken, hard-boiled eggs and olive raisins.  A final layer of the corn mixture is sprinkled on top, and this mouth-watering creation is all baked together in a clay bowl for 30 minutes. When the sous chef came out to ask if I enjoyed the meal, I told her I loved it so much that I wanted to drop down on one knee and propose.

Later that night, I was trying to sort all of this madness in my head. If you had an opportunity to visit a place that was developed by a man that once did business with Saddam Hussein and allegedly called Fidel Castro a friend, would you take it? How about if this same man designed a weapon that has a killing range of a few American football fields, would you still want to meet him? I am left in a state of turmoil even though I have been back for a few months now. However, the experience and hospitality that Mr. Cardoen’s staff showed and what I later uncovered about what he has done for the region and his hometown, made my stay in Santa Cruz definitely a lot more digestible. I can honestly say, I would highly recommend a visit.