The sunlight streaks the water and the taste of sea salt brushes across my lips as my body struggles to  balance on the large, light blue surfboard below me. Out here on the ocean, this board has to become an extension of myself or I’ll look like a circus clown tumbling across the waves.

My instructor looks up at me with his piercing blue eyes, his gaze trained on the incoming wave behind me. I can tell from his look that this next one will be a good wave, which both makes me nervous and thrilled at the same time. I’m laying on my stomach, staring intently at the beach, willing my body and board to work together and not send me cartwheeling into the water again. I feel the sea swell beneath my board as I’m pushed forward to the sounds of my teacher yelling  “pop-up! pop-up now!” I push my back up, keep my gaze on the shore and jump to a standing position, bracing myself for the smack of water that will envelop me. A second passes, than two and I’m still standing–no, I am surfing!  In that moment it’s as though the Atlantic ocean has finally reached up, shaken my hand and decided to open itself up to me as I glide in-sync with its waves and introduce myself right back. 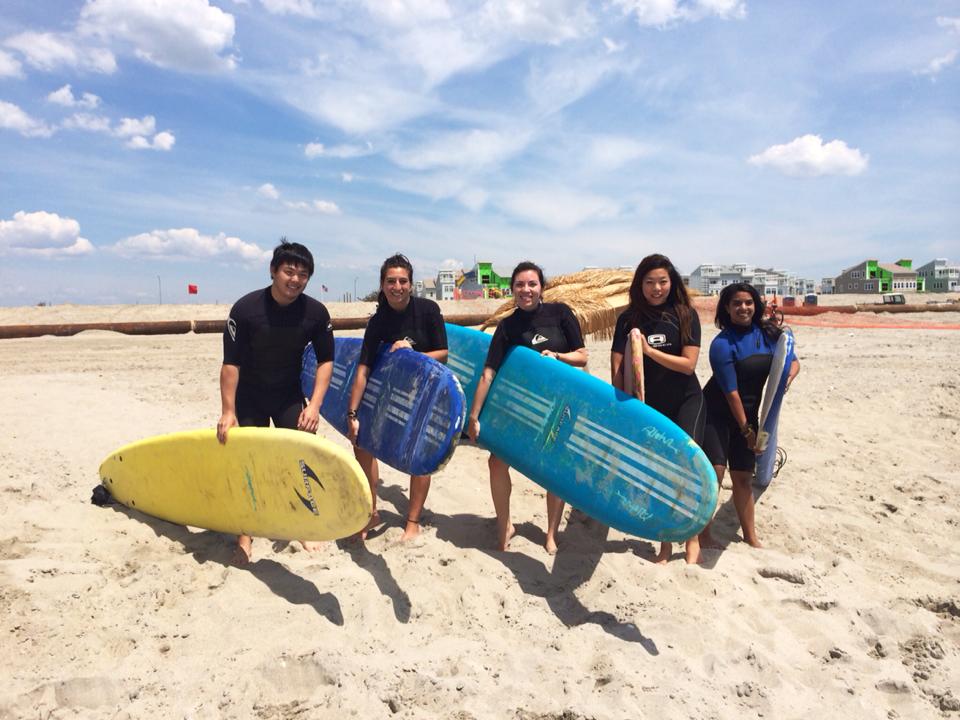 With it towering buildings, crowded avenues and hot garbage stench, surfing in New York City can sound like a ludicrous idea but take the A train an hour to the Far Rockaways and the view reveals a dramatically different world from that in the heart of the concrete jungle. Skyscrapers are replaced with residential homes, busy avenues by quiet streets and city air by a cool ocean breeze. The Far Rockaways are an 11 mile peninsula positioned off Queens and jutting out into the Atlantic Ocean. Unlike the Hamptons, Rockaway Beach “became a symbol of urban neglect and governmental shoulder-shrugging,” according to the New York Times. What was once an area populated by upper class residents and Victorian mansions seemed to decline in popularity following World War II.

Years later–once surfers started to claim the Rockaways as their local haunt–the culture of the area began to transform from a forgotten spot to a rebellious, beachfront destination reminiscent of California. At first surfing in the area was illegal, only adding to the “outlaw mentality,” until the city designated a stretch of beach for surfers to call their own. Today, the Rockaways are the anti-Hamptons, boasting cheap rents and tourist-free beaches for weary New Yorkers seeking sun, sand and sea. The history of the Rockaways and ingrained grit add to the appeal for those who find Montauk too swanky for their taste. 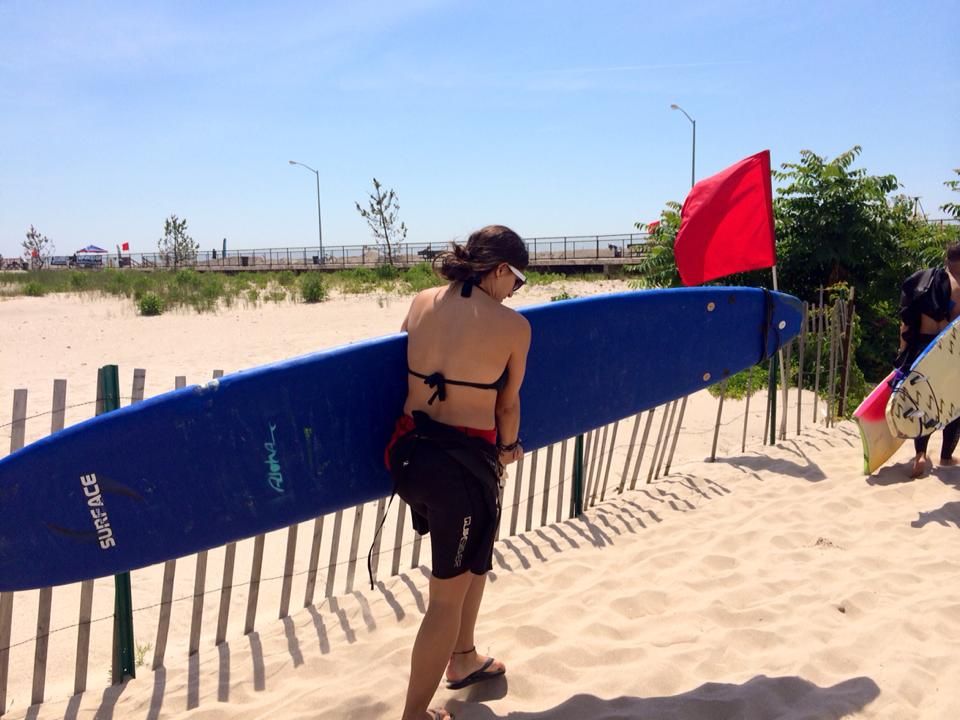 On a  recent a trip to an island off Panama’s Atlantic coast, my friends and I found ourselves thrown into a surfing culture that left us yearning to try our hand at the sport. Once back in the city, we decided to take a surfing lesson with the Aloha NYC Surf School and learn the basics of riding waves this past weekend. For less than $100 each, we found ourselves with neoprene wet suits on, laying on top of surfboards on the sand and learning how to jump up to proper surfing positions. 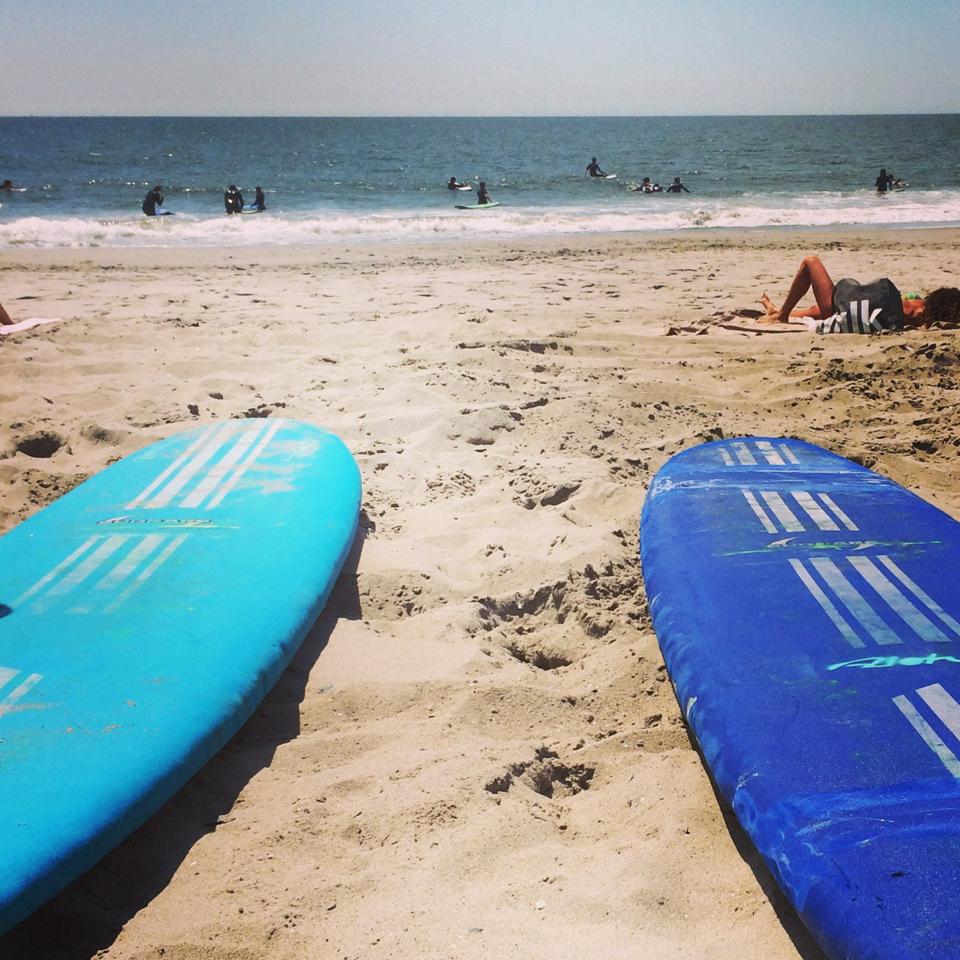 The basics of surfing essentially seem to come down to three moves: paddle, arch your back up and then pop up quickly. While the 3-step process seemed easy enough to master on land, learning to pop up while riding a wave was another thing entirely. As it ends up, a lot more factors come into play when out on the water. Lean too far forward on your board?  The wave will send you flying like a Looney Tunes cartoon character. Train your eyes down while jumping up? You’ll fall to the side in underwater cartwheels, looking like you were thrown into a washing machine. But if you ride the wave just so and keep your eyes trained on the beach then the amazing feeling of becoming one with the wave takes over and you’ll find yourself surfing smoothly back towards NYC.

*For day rentals of surfboards and wet suits at the Far Rockaways you can visit The Boarder Surf Shop here.