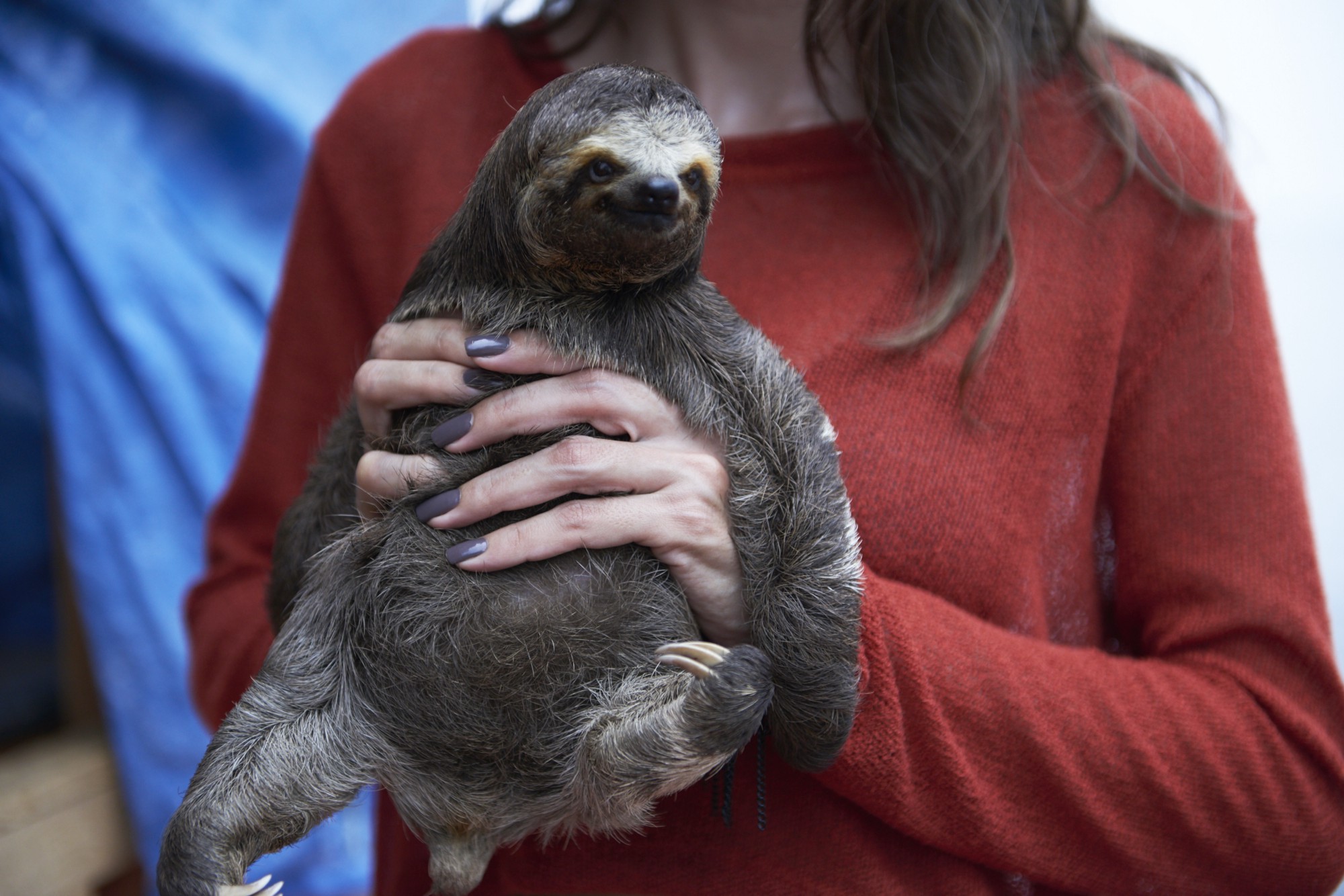 Early morning in Manaus and the first rays of sunlight pierce through the dense blanket of fog that has drifted off the Amazon River overnight and wrapped itself languidly around the Brazilian city. Manaus, which serves as a gateway to the Amazonian rainforest, is a popular tourist destination sitting on the nexus of the murky Rio Negro and the famed Amazon River. A launchpad for jungle adventures, Manaus whets traveler’s appetites with local tours promising exotic animal encounters.

With an estimated 94 percent of local tour operators offering animal excursions, travelers could almost be forgiven for paying a small fee to enjoy a glorified petting zoo in Manaus. With smartphone and selfie stick in hand, locals introduce tourists to caged ocelots, deceptively smiling sloths, timid anteaters, green anacondas and vibrant toucans. As travelers roam the dirt-packed grounds of the local’s home, sloths are picked up and posed with, anacondas are wrapped around shoulders like feather boas and toucans are playfully placed on heads.

The experience seems harmless — money is exchanged for supporting the local economy and spending time with animals to boot — as tourists are blissfully preoccupied with selecting Instagram filters and writing witty, enviable captions. What international charity, World Animal Protection(WAP), uncovered is that these tours are ridden with abuse inflicted on wild animals for the sake of selfie-stick touting tourists. 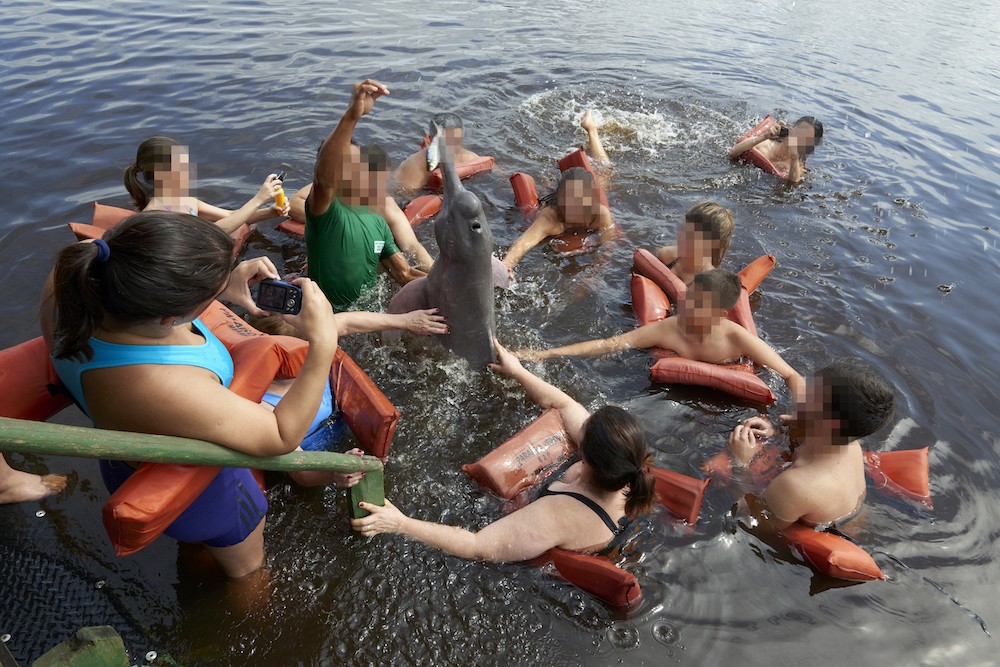 “Our love of selfies on social media is driving the suffering and exploitation of Amazon wildlife, such as sloths, anacondas and caiman crocodiles,” explains Kai Akram, Global Head of Media of WAP. “Animals are snatched from the wild — often illegally — and used by irresponsible tour operators who cruelly exploit and injure wildlife to entertain and provide harmful photo opportunities for tourists.”

WAP investigators revealed that wild sloths are captured and tied to trees with rope, not surviving beyond six months post-capture. Birds are revealed to have severe abscesses on their feet, while anteaters display signs of physical and psychological abuse by their owners. Green anacondas were found to be dehydrated and wounded, caiman crocodiles are often restrained with rubber bands around their jaws; while those cuddly ocelots are stuffed into too-small, barren cages.

Fueled by a social media obsession of people keen to pose alongside wildlife, the animal cruelty shows no sign of stopping. Since 2014, there has been a 292 percent increase in the number of wildlife selfies posted to Instagram, according to research by World Animal Protection. Of the multitude of animal selfies currently on the popular photo-sharing platform, over one quarter are what WAP calls ‘bad selfies.’ 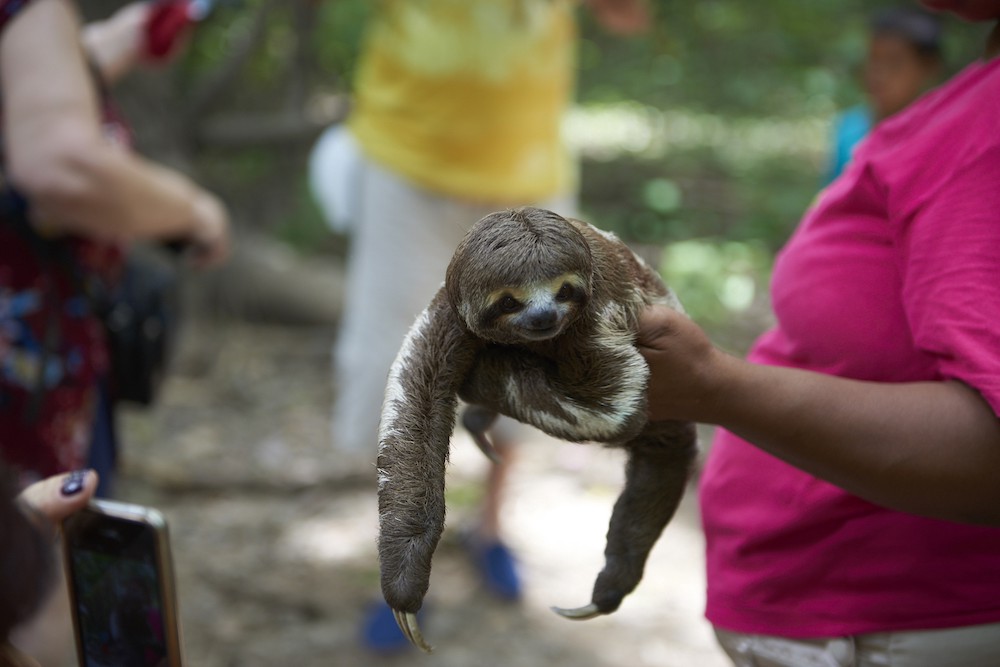 A ‘bad selfie’ with a sloth | © Nando Machado/World Animal Protection

World Animal Protection is fighting to spread awareness of bad selfies by encouraging everyone to sign a Selfie Pledge alongside 200,000 other people who have vowed to commit to cruelty-free selfies. To spot (and ideally flag and report) a bad animal selfie, look for photos that show a person hugging, holding or inappropriately interacting with a wild animal in any way as this usually points to unethical tour operators.

“Behind the scenes, wild animals are being taken from their mothers as babies and secretly kept in filthy, cramped conditions or repeatedly baited with food causing severe psychological trauma,” adds CEO of World Animal Protection, Steve McIvor. “The wildlife selfie craze is a worldwide phenomenon fueled by tourists, many of whom are unaware of the abhorrent conditions and terrible treatment wild animals endure to provide that special souvenir photo.”

While animal cruelty in tourism exists around the world — from elephant riding in Thailand to swimming with dolphins in Mexico — the World Animal Protection focused their investigation on the gateway cities of Manaus, Brazil and Puerto Alegria in Peru. Ironically, of the 20 percent of animals involved in Latin America’s unethical animal tourism, 60 percent are in fact protected by international law, reports WAP Global Wildlife Advisor, Dr. Neil D’Cruz.

To tackle the growing issue, WAP is calling on relevant governments to better enforce animal protection laws and monitor tour operators offering animal encounters. The World Animal Protection is also in discussions with Instagram officials to explore ways to stem the flow of bad animal selfies and educate users on how to inadvertently avoid supporting animal cruelty in their travels. 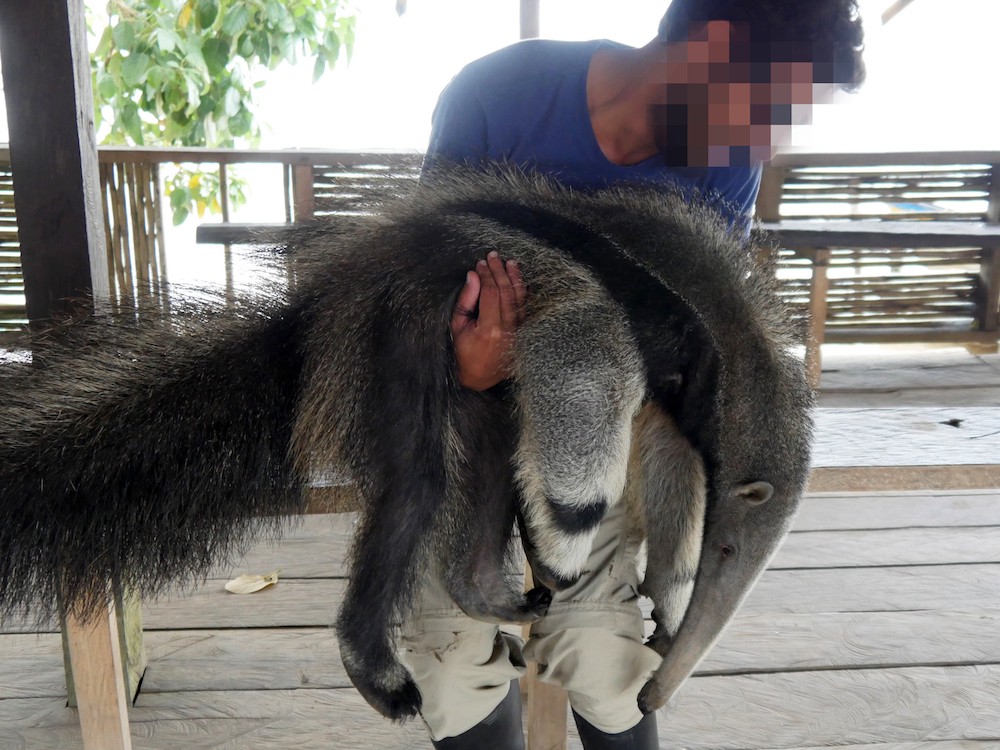 A tourist poses with a captive anteater | © World Animal Protection

When questioned about the growing number of animal selfies and associated abuse on their platform, an Instagram spokesperson replied: “We prohibit the use of Instagram to facilitate or organize the criminal activity that causes physical harm to animals. We remove reported content that promotes poaching of endangered species or the sale of animals for an organized fight, and that includes animal abuse.”

Instagram’s spokesperson confirmed the platform is having ongoing conversations with wildlife experts in hopes of providing the online community with information about animal cruelty; although, Instagram was unable to comment any further on exactly how this will be achieved.

The thing it, animals play a massive role in the Instagram community, often garnering millions of followers. “Animals at the very highest echelons of fame have NFL-size entourages,” reports Quartz Media. “Even pets with relatively middling-sized followings have access to opportunities human fame-seekers would envy: product lines, endorsements, guest appearances, and endless freebies.”

While many of these famous animals are domesticated pooches, wild animals share the spotlight as well, sending a clear message that on Instagram, animal photos do well. While a stand-alone animal selfie can garner thousands of likes, comments, and fleeting online fame; owning a wild animal — such as Pumpkin the Raccoon or Juniper Fox — can prove a lucrative business with endorsements and money to be made. How Instagram plans to weave in animal cruelty awareness into a model that thrives on animal photos, remains to be seen.

Ultimately, it falls on a traveler’s shoulders to be diligent about the animal activities they choose, and to be sure they are not supporting (and promoting) animal abuse through their social media. Despite promises from local tour operators that their animals are “happy” and “love being held,” a clear indication of an unethical tour is direct interaction with any wild animal in a contained space.

World Animal Protection continues to give wild animals a voice, fighting for the end of cruel tourism, opening a rehabilitation center for sloths in Colombia and helping local communities learn ways they can tap into tourism dollars without harming wild animals in the process.