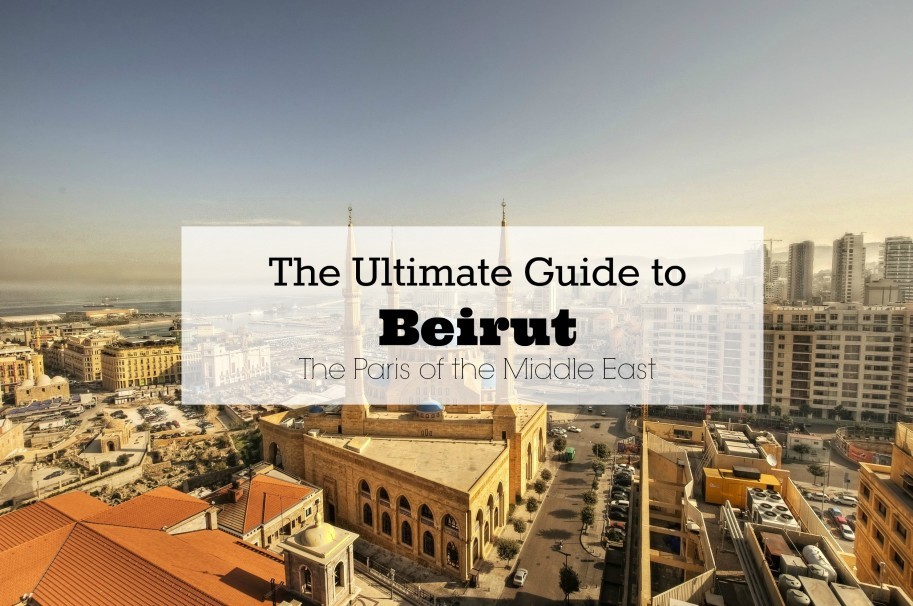 Out of all the regions in the world, the Middle-East is by far my favorite. It is, in my mind, as intriguing as it is chaotic; a place of complete paradoxes in which I feel at home. Therefore, I could hardly contain my excitement the first time I boarded a plane to go live, for a few months, in Lebanon. Far from what the news tends to broadcast in Europe or America, Lebanon is a (small) land of lifestyles, beliefs, landscapes and contrasts; it becomes apparent as soon as you step foot in its capital, Beirut. There, you’ll find nightclubs facing mosques, rooftop bars and underground kiosks, skyscrapers and ruins, mini-skirts and burqas, and of course, as anywhere else in the region, lots of falafel and baklavas. If you’re a first-timer in the city, here’s my personal ultimate guide to help you get around and give you a brief introduction to what you can expect from Lebanon’s enchanting capital.

A Quick Guide to Beirut’s Neighborhoods: 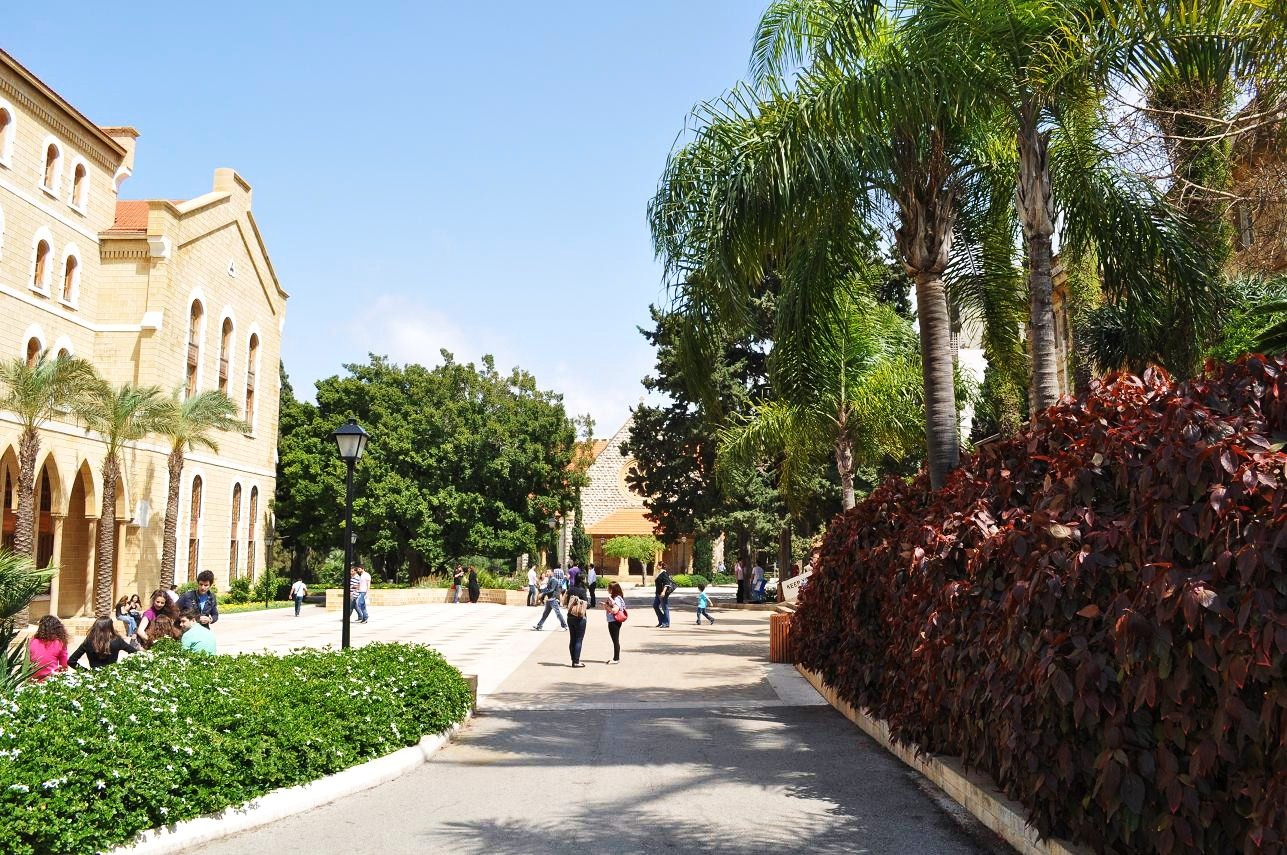 The neighborhood of Al Hamra (source)

Raouché and the Corniche: Beirut’s famous rock and the Seafront (« Corniche » in French) is the best place to have a walk during the day (if you want to admire fishermen at work) or at night (if you want to meet street vendors and tons of other people taking a family stroll).

The Clock Tower and the Star Square: It is the city’s most famous pedestrian street, with tons of stores and nice restaurants around it. If you go there, try to visit the Al Ameen Mosque as well, it is the biggest one in Beirut and one of the most astonishing I have ever seen.

Zeytouna Bay: You will find lots of nice cafés around this chic and modern port. This is one of the best places to people-watch and to get a first look at the city’s high-society. They usually go there for brunch on weekends and so should you. Enjoy it though, as it won’t be the cheapest place in town.

Gemmayzeh: Beirut’s most “European” neighborhood. There you’ll find a lot of bars, cafés, and cheap restaurants. It’s a very lively quarter in the city and usually one of the locals’ favorite. A huge amount of street art also adds considerably to the neighborhood’s overall beauty.

Al Hamra: “The Red”, in literal Arabic, is what I would describe as Beirut’s artsy and hipster neighborhood. Located just beside the AUB (American University of Beirut), you’ll cross paths with Lebanese college students enjoying the nearby cafes, exhibitions and restaurants. While you’re there, visit the (huge) university campus, which could make any Harvard student jealous!

Ashrafieh: Also located in the center is Ashrafieh, Beirut’s fanciest neighborhood. Head there if you’re a fan of nice venues, beautiful churches and skyscrapers. Though it is more expensive than other places in the city, it is one of the most famous neighborhoods and a place you must visit. 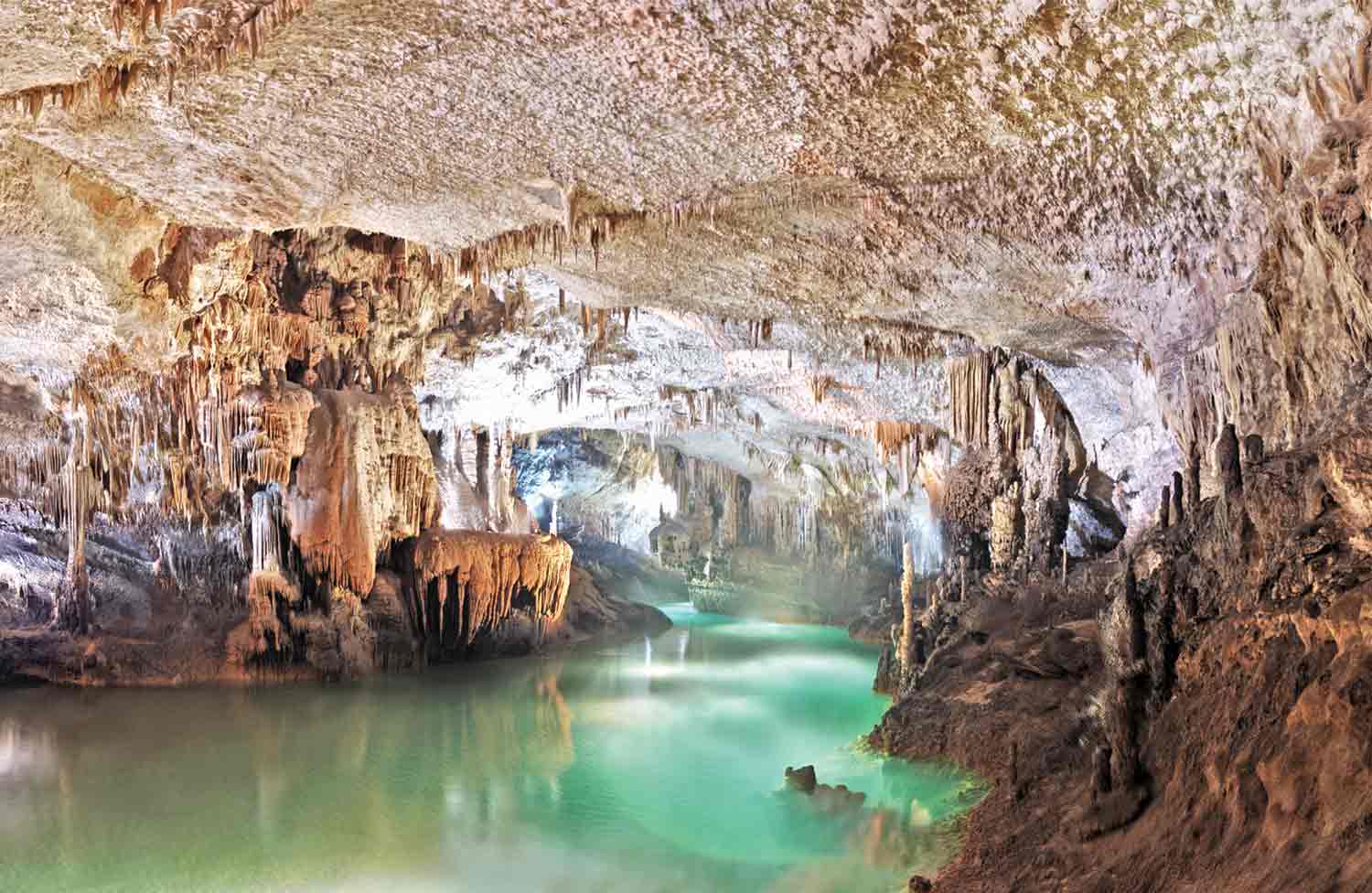 Jeita Grotto: One of the world’s new seven wonders, THE place to see in Lebanon if you ask for my opinion. Though no pictures are allowed, the grotto is simply breathtaking and missing it while in Lebanon would be just wrong. You’ll have to enjoy it only with your own eyes, but believe me when I tell you that this memory will certainly last a lifetime.

Harissa’s cable car: If you’re a landscape enthusiast, head to Beirut’s neighboring Harissa hill. A cable-car will take you all the way to the top where you will enjoy an astonishing view on Beirut, the ocean and the surroundings. Try to go there during the week, as it gets quite crowded on week-ends.

Byblos: Last but not least, Byblos, a wonderful old town (at least 7000 years old!) with a gorgeous port.  I lost my heart there, imagining the place’s tormented history while taking in all the beauty of the setting. I can only advise you to stay there until sunset, one of the most beautiful I’ve ever witnessed. 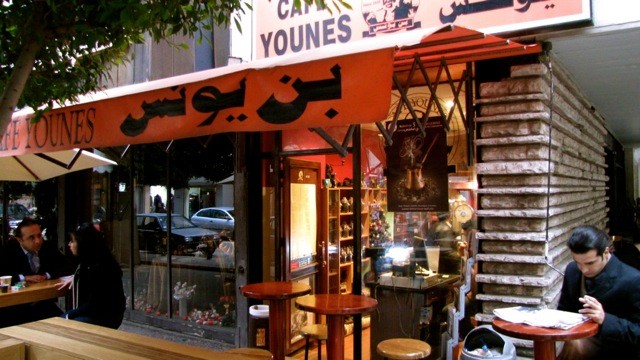 The city is filled with amazing restaurants, no matter if you’re on a budget or not. If you are on the go and looking for something fast, cheap and typical from Lebanon, head to “Falafel Sahyoun”. This small shop, located just a few minutes away from the Al Ameen Mosque, is an institution. To many, that’s where you’ll enjoy the best falafel in Lebanon. I fell in deep love with this restaurant once I discovered it and became so addicted that I’d have to head there at least once a week!

If you’d rather try a tasty (and cheap) Lebanese meal in a local fast-food, I’ll give you not one or two but three options: while meat lovers will become a fan of Kababji, vegans and veggies will tend to prefer Leil Nahr and Zaatar w Zeit. These three restaurants are chains that you will find all over Lebanon and beyond, as some even opened branches elsewhere in the region.

If you want to try the complete Lebanese culinary experience, I can only recommend Abd El Wahab, one of the city’s most famous restaurants. Located in Ashrafieh, it is quite expensive but it is so worth it. It is the perfect place for a romantic date.

Lebanese cuisine is, by far, my favorite as it is, to me, one of the most diverse and tastiest in the universe. If you’re a foodie (just like me) and have never eaten Middle-Eastern before, here are some odd words that could easily change your life forever: Manakish, Warak Enab, Hummus, Fattoush, Tabbouleh, Baba Ghanouj, Foul, and Shawarma. If you still can’t make your mind once at the restaurant and want to try a bit of each, ask for a Mezze and you’ll get small samples of every dish.

And if, just like me, you have more of a sweet-tooth, you absolutely need to try Kenafeh, the typical pastry from the Middle-East. You’ll find plenty of stores selling it (along with the traditional Baklavas), though my recommendation is Al Baba. And if you’d rather bring back chocolate to your home-country, head over to Patchi. Actually, go there even if you don’t want to buy a thing, Lebanon is probably the only place where you’ll find bodyguards in a chocolate shop and it deserves to be seen!

What to Do in Beirut: 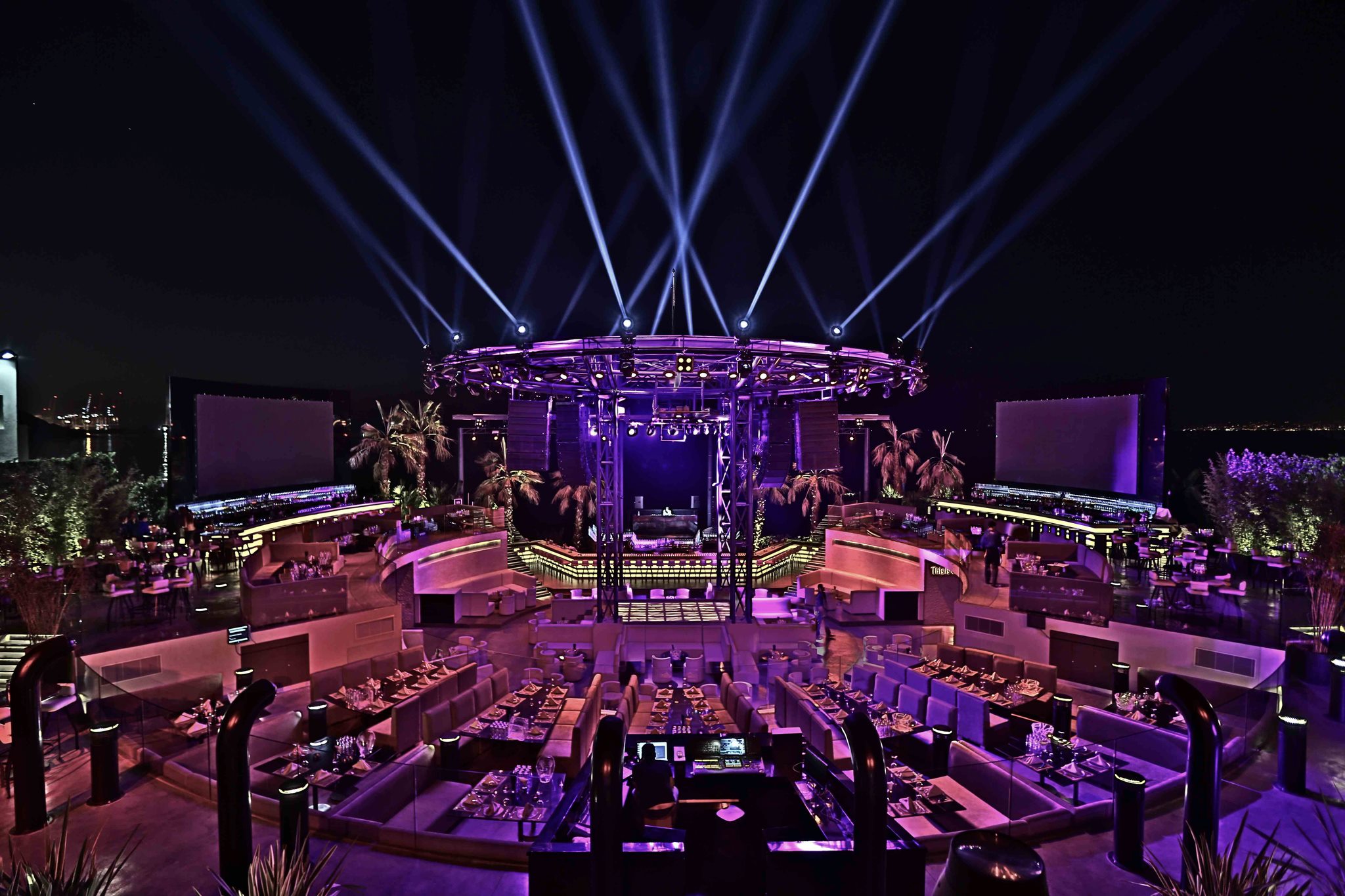 If you want to sit at a café: The city is filled with Starbucks, Dunkin Donuts and Kripsy Kreme… But for a more local experience, I’d recommend trying Café Younes. Located in Al Hamra neighborhood, it is one of the most famous, historical and cheap places downtown and their coffee is irreplaceable.

If you want to drink and dance: If you’re more of a bar enthusiast, head to Gemmayzeh on any night of the week. Though it is usually the foreigners’ headquarters, you won’t be disappointed if you like this kind of atmosphere. Night-clubbers will then most likely head to Skybar or White, two of the most famous clubs in the city. But remember that Beirut is known for its nightlife so you’ll find clubs pretty much everywhere: on rooftops, on beaches, and even in old deserted bunkers.

If you want to shop until you drop: Beirut is filled with malls but the most famous ones are the ABC Mall and the City Mall. I personally prefer the Beirut Souks, as it is an outdoor. The Hamra Street is also a great option, as it is both practical and fun.

If you want to swim and get a tan:  Head to St Georges or La Plage outdoor pools. While the first one is more family-friendly, the second is the best place for an afternoon party.  For each, you’ll pay 30 dollars a day approximately. However, my personal favorite one is Palm Beach, located on a rooftop of the Warwick.

So, there you have it, a quick introduction to my beloved Beirut. This list is far from complete, very subjective and doesn’t cover a tenth of the city’s beauty. Be assured that your stay will be full of other surprises, unexpected moments and beautiful stories. The capital of Lebanon is just one of a kind, and it is so much more than what you may picture. Just trust me on this one: Your next visit to the “Paris of the Middle-East” won’t certainly be your last.

Have you been to Beirut? Will you add it to your travel list? Share your thoughts, questions and comments below!