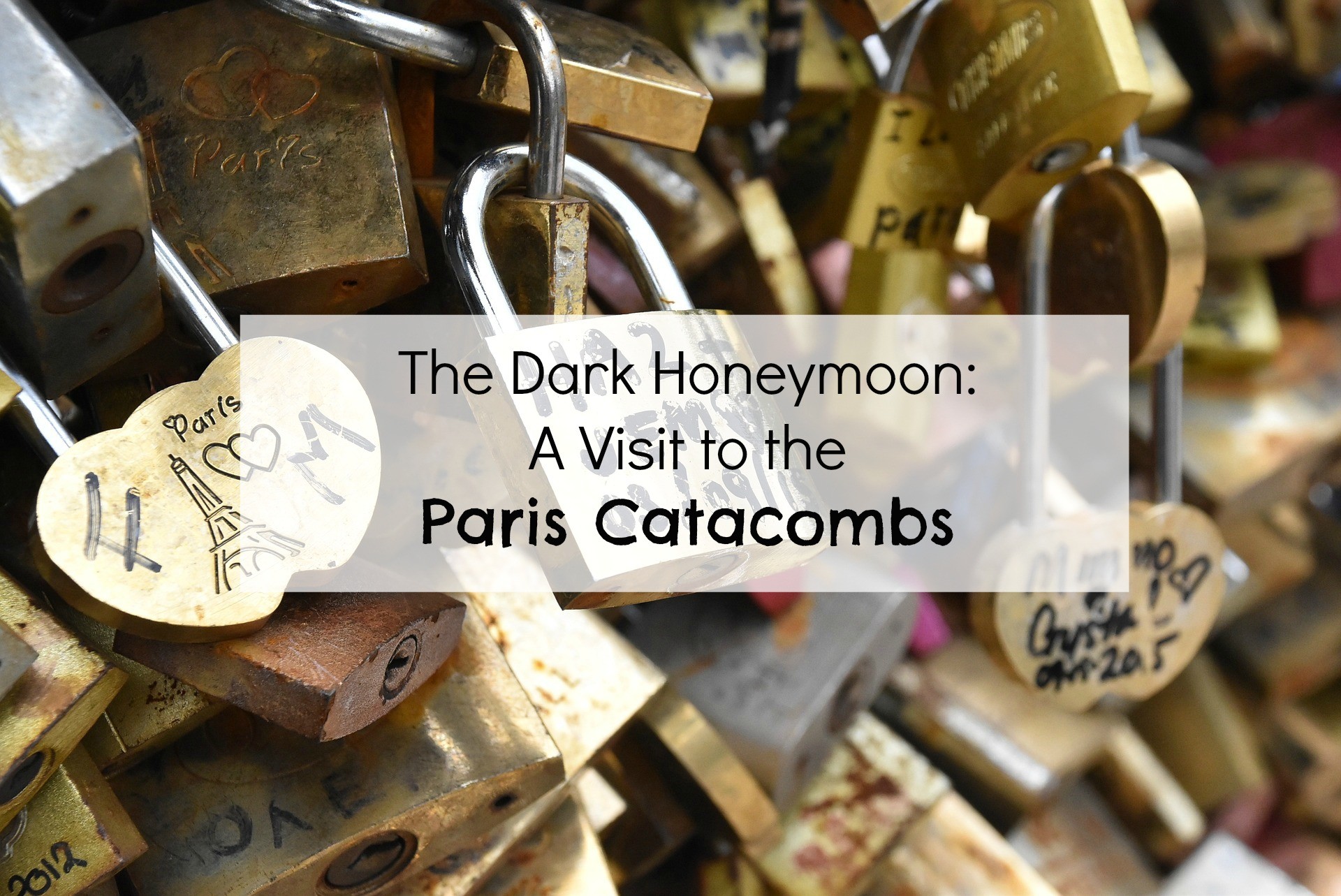 After an hour spent taking cell phone pictures and taunting sparrows, my husband and I found ourselves at the front of the line to see the Paris Catacombs. We were on our belated honeymoon, more specifically on a three-day trip to the City of Love after tours of Frankfurt, Heidelberg, and Freiburg. Holding hands, we descended down the stairs and stepped up to the kiosk to pay our fare. Then we popped up behind another couple and began our journey underground.

Our subterranean companions shared an audio guide, with the woman giggling nervously every time she passed the headphones to her boyfriend. He usually made a joke before accepting them. I felt voyeuristic watching the man and woman interact with another just a few feet in front of us. It didn’t seem right to observe them, but they were hard to ignore. The tunnel was otherwise silent and my husband and I hadn’t gone for the audio guide. We weren’t being cheapskates. It just didn’t seem fitting to have someone buzzing in our ears while we traversed this holy and mysterious place. Besides, we had read a little about the site in advance and I was happy to translate signage for my husband.

We treaded slowly through the dark limestone tunnel, falling farther and father behind the other couple. No longer privy to the Australians’ conversation, I started to notice the faint sound of dripping water. The plink-plink in the dim amber light brought me back to Luray Caverns in my native Virginia. The Paris Catacombs may have lacked the dramatic stalagmites and stalactites of the famous Appalachian attraction, but they were just as eerie and perhaps even colder. And we hadn’t even reached the bones yet. It was mid-September and, despite having on a denim jacket, I was shivering. Not that I needed an excuse to bury myself into my husband’s arm, but if I did, I had one.

Eventually we began seeing graffiti, which inspired annoyance, and then one crazed quarryman’s perfectly rendered architectural carvings, which inspired awe. When we stumbled upon the miniature fortress of Port-Mahon, my husband and I glanced at each other before staring at the tiny world before us. Still, we couldn’t linger there forever. We were eager to see the mass grave of Parisian lore.

After checking out photos in advance, I thought I knew what to expect of the ossuary. But nothing can prepare you for seeing the remains of six million people. Once we came upon a sign that read, “Stop! This is the Empire of Death,” we knew our honeymoon was about to take a macabre turn.

I took one peek and then couldn’t move for several seconds. There simply were too many bones, too many skulls, too many empty eye sockets. On and on they went. Just when we thought we had hit the last leg of the tunnel open to the public, we found ourselves among even more artfully constructed piles of bones. That feeling of endlessness made the ossuary both mortifying and beautiful.

As my husband and I passed wall after wall of ulnas and femurs and tibias that had been dug up from cemeteries and relocated here in the 18th and 19th centuries, I wondered once again about death—what it would feel like to die, where the souls of these six million people were spending the rest of eternity. If you didn’t naturally fall into such a way of thinking, there were morbid poems and quotes to prompt you. Sometime before we returned to the streets of Paris, I stole a look at my husband and felt a renewed sense of love for him. One day, he too would die. Life is precious because it is temporary. Even when it does not end in divorce, marriage, as a part of life, also is temporary. No matter how many dinners you’ve had together, how many trips you’ve taken together, there will be a final dinner, a final trip, a final day together. And that first day is as precious as the last.